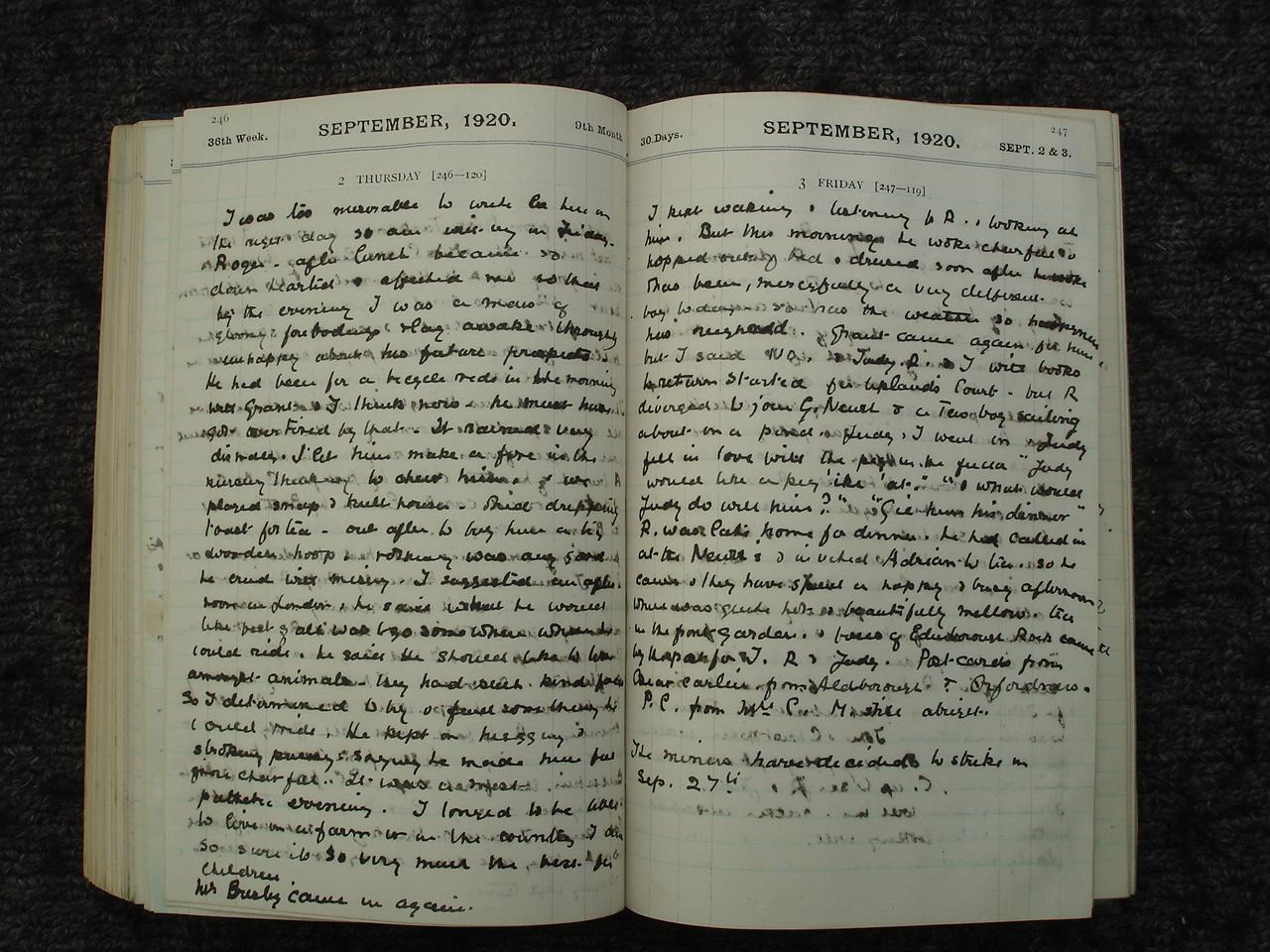 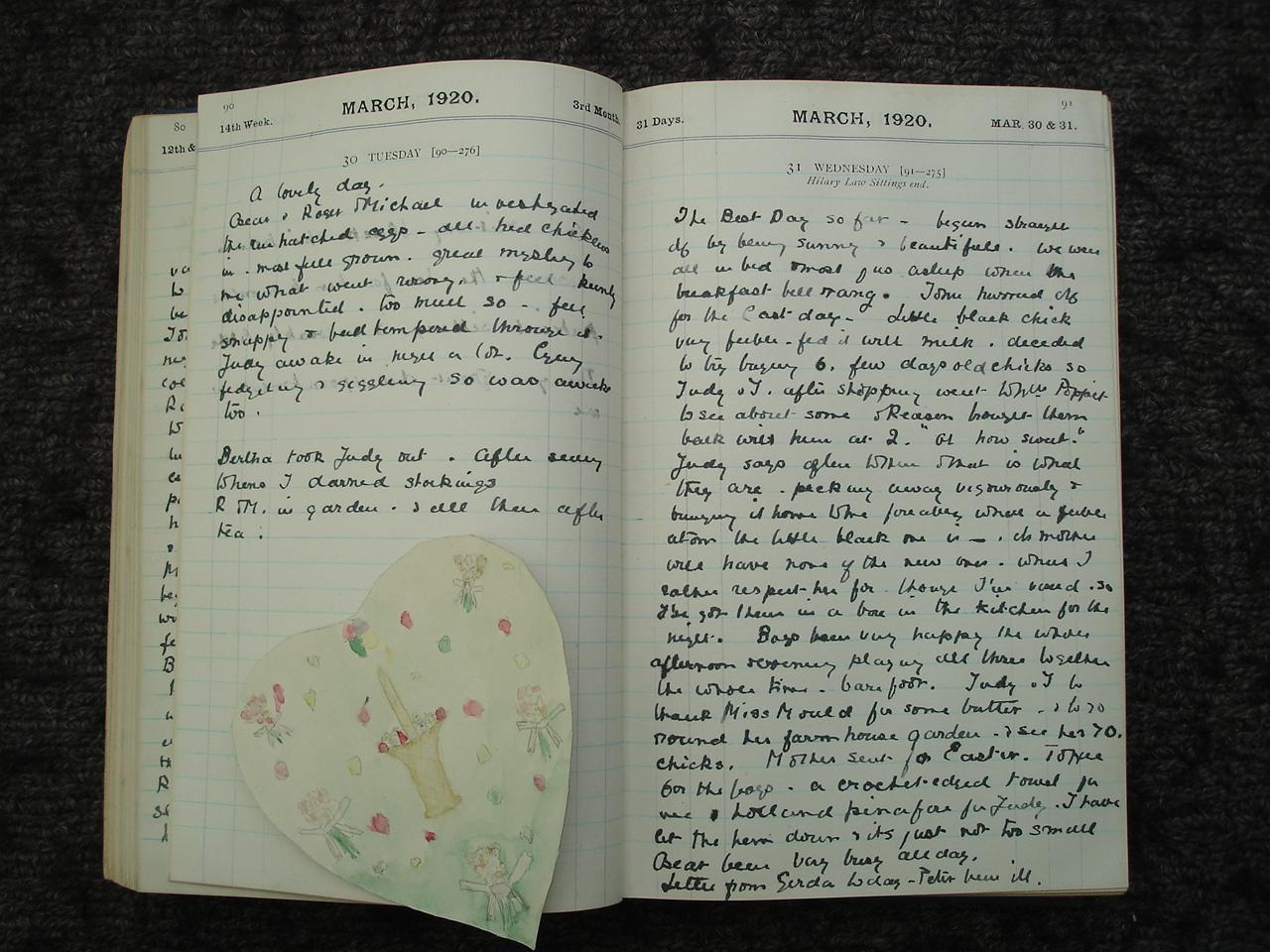 On offer is a densely written manuscript diary dated 1920 handwritten by Louisa Holdsworth Sampson, mother of artist Roger Hilton. Besides being a lovely account of daily life in a middle class family during the years immediately after the World War I in 1920 there is insight into the early life of Roger when he was still a child. [The book does not provide identification but this diary came from a larger archive providing provenance.] A total of 220 pages, the largish page a day, diary is over seventy percent full. Hilton came by his artistic abilities honestly as his mother trained as a painter at the Slade School where Hilton also studied 1929-31. BIO NOTES: One online source: Roger Hilton CBE (1911 - 1975) was a pioneer of abstract art in post-war Britain. He was born in 1911 in Northwood, London and studied at the Slade School of Fine Art, London under Henry Tonks and also in Paris, where he developed links with painters on the Continent. In World War II he served in the Army, part of the time as a Commando, for about three years being a prisoner of war after the Dieppe raid of 1942. He worked as a schoolteacher for a time after the war, also teaching at Central School of Arts and Crafts, 1954-56. During the 1950s and 1960s Hilton began to spend more time in west Cornwall, moving there permanently in 1965. In the same year he married Rose Phipps, 20 years his junior, having divorced his first wife, Ruth David. He became a prominent member of the St. Ives School and gained an international reputation. He won the 1963 John Moores Painting Prize, and was appointed CBE in 1968. By 1974 he was confined to bed as an invalid precipitated in part by alcoholism. His work became less abstract in his later years, often being based on the nude or images of animals. He died at Botallack, not far from St Ives, in 1975. Overall G+.; 12mo - over 6¾" - 7¾" tall; KEYWORDS: ROGER HILTON, LOUISA HOLDSWORTH SAMPSON, BOTALLACK, ST IVES, CORNWALL, ARTISTS, ABSTRACT, SLADE SCHOOL OF FINE ART, WOMEN STUDIES, GENDER STUDIES, SOCIAL STUDIES, WRITER, HOLOGRAPH, SIGNED, PERSONAL, MEMOIR, HANDWRITTEN, HAND WRITTEN, AUTOGRAPH, AUTOGRAPHS, BRITISH, ENGLAND, ENGLISH, SIGNED, LETTERS, DOCUMENT, DOCUMENTS, MANUSCRIPT, MANUSCRIPTS, WRITERS, WRITER, AUTHOR, HOLOGRAPH, TRAVEL, PERSONAL, ANTIQUITÉ, CONTRAT, VÉLIN, DOCUMENT, MANUSCRIT, PAPIER ANTIKE, BRIEF, PERGAMENT, DOKUMENT, MANUSKRIPT, PAPIER OGGETTO D'ANTIQUARIATO, ATTO, VELINA, DOCUMENTO, MANOSCRITTO, CARTA ANTIGÜEDAD, HECHO, VITELA, DOCUMENTO, MANUSCRITO, PAPEL,