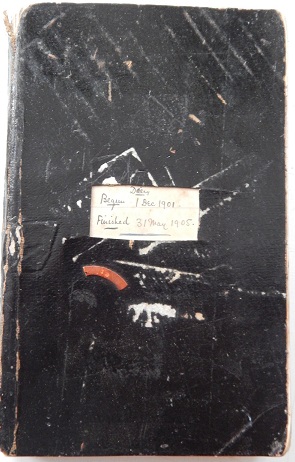 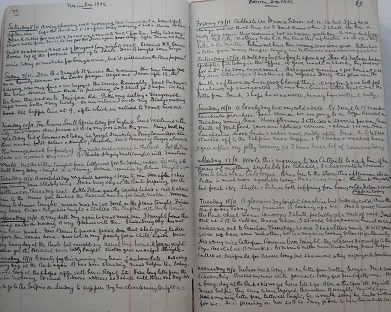 On offer is a fascinating, enigmatic, original December 1901 to May 1905 Edwardian Era manuscript diary handwritten by we believe Guy Newman of Haverstock in London England. Less than a year after he death Mr. Newman writes a diary that exemplifies the end of Queen Victoria's less sociable more austere reign into the breathy, heady days of Edward's fashionable regency. He writes with a near obsessive qualities: the writing, legible but very small fills each page as he creates a diary of almost extraordinary detail of the doings and happenings from his intimate personal circle to the social and political scene in London to almost the entirety of England: he refers to the two wicked women being hanged in Holloway; the death of Cecil Rhodes; a visit to the Zoo; relatives off to South Africa; train journeys; Royal Tournament; King and Queen's procession just to note the merest of jottings. A banker, the young man who marries in June of 1902, references the stock market and corporate doings frequently and as historians will agree he was at the epicentre of the financial world and arguably the most enviable country in the world; in the rush to get ahead we learn he and his wife to be whom he calls 'Babs' or 'Bessie' have a business selling perfume and there are numerous entries relating to orders and contact names. That said we find Mr. Newman an odd man. The book proper has a stiff, paper cover which has had a small rectangular window cut into it. Pasted on the back is a square of paper with the start and finish dates of the diary. The pastedown, now torn, covers and partially obscures what appears to be the inscription ownership information. The name Guy Newman is visible resting on the upper edge. However Guy makes the reader very confused until one understands he writes in the third person. For example he lists himself and Bessie in the wedding presents as 'Guy to Bessie' and 'Bessie to Guy'. He even writes at one point that he has to see someone to sell perfume and that 'Newman has promised him an order for Christmas'! While the cover of the 210+ page 7 x 5 x ¾ inch thick book is chipped and scuffed and a little knocked the interior is very good and overall G+. ; Manuscript; 12mo - over 6¾" - 7¾" tall; KEYWORDS: HISTORY OF, GUY NEWMAN, ELIZABETH NEWMAN, BESSIE NEWMAN, HAVERSTOCK, LONDON, ENGLAND, HOLLOWAY HANGINGS, EDWARDIAN ERA, THE CITY, FINANCE, ECONOMICS, PRE WORLD WAR I, PRE WW1, TURN OF THE CENTURY, ENGLISH ECCENTRICS, BRITAIN, BRITTANICA, OBSESSIVE COMPULSIVE, OCD, HANDWRITTEN, MANUSCRIPT, AUTOGRAPHED, AUTHORS, DOCUMENT, LETTER, AUTOGRAPH, KEEPSAKE, WRITER, HAND WRITTEN, DOCUMENTS, SIGNED, LETTERS, MANUSCRIPTS, HISTORICAL, HOLOGRAPH, WRITERS, AUTOGRAPHS, PERSONAL, MEMOIR, MEMORIAL, PERSONAL HISTORY, ARCHIVE, DIARY, DIARIES, JOURNAL, LOG, PRIMARY SOURCE, FIRST HAND ACCOUNT, SOCIAL HISTORY, PERSONAL STORIES, LIVING HISTORY, ANTIQUITÉ, CONTRAT, VÉLIN, DOCUMENT, MANUSCRIT, PAPIER ANTIKE, BRIEF, PERGAMENT, DOKUMENT, MANUSKRIPT, PAPIER OGGETTO D'ANTIQUARIATO, ATTO, VELINA, DOCUMENTO, MANOSCRITTO, CARTA ANTIGÜEDAD, HECHO, VITELA, DOCUMENTO, MANUSCRITO, PAPEL,BIOGRAPHY BIOGRAPHICAL AUTOBIOGRAPHICAL AUTOBIOGRAPHY PERSONAL NARRATIVES