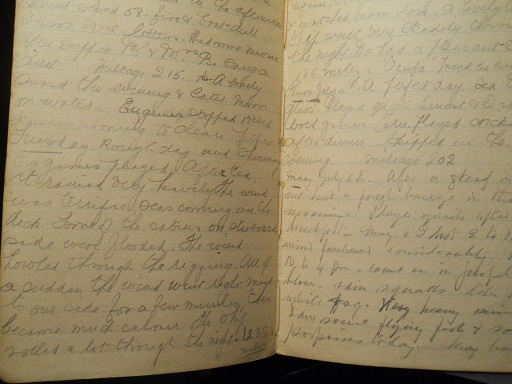 1912 ORIGINAL TWO VOYAGE MANUSCRIPT DIARY: AUSTRALIA TO LONDON, THEN LONDON TO CALCUTTA WITH DESCRIPTIONS OF ALL POINTS AND PORTS IN BETWEEN

On offer is a super, very interesting 1912 original manuscript travel journal detailing two long distance voyages by a woman, the author, and her husband. The author has inscribed her name on the inside cover and on a tucked in ship board game form and while the first name Mary is distinct we cannot be positive but the surname appears to be Dwight, thusly Mary Dwight and husband Ernest. The first voyage, on the SS Morea, departs from Adelaide Australia to London England via Durban, Cape Town and Las Palmas. We note she mentions that no less than 20 people came to see them off! The second trip on the SS Caledonia was from London to Calcutta, via Marseilles, Port Said and Colombo. Between the voyages she resides in London which in itself is a fascinating and interesting read. This is a well written account, in which she describes in vivid detail, life on board a ship in the early part of the last century, including sailing through storms and towering seas in the Southern Indian Ocean. She also writes well about her shore excursions in Durban, Cape Town, Marseilles, Port Said and Colombo. There are some pages torn out at the back though without loss as the narrative ends seamlessly with the writer arriving in Calcutta. The 7¼ x 5 inch book has approximately 90 pages of narrative and while thee cover is chipped at the spine extremities the book is overall G.; Manuscript; 24mo - over 5" - 5¾" tall; KEYWORDS: HISTORY OF, SS MOREA, SS CALEDONIA, ADELAIDE TO LONDON, DURBAN, CAPE TOWN, LAS PALMAS, LONDON TO CALCUTTA, INDIA, MARSEILLES, PORT SAID, COLOMBO, NAUTICAL, MARINE, MARINERS, OCEAN GOING VESSELS, COMMERCE BY SEA, DOWN UNDER, TO THE ENDS OF THE EARTH, FAR SIDE OF THE WORLD, SOUTHERN INDIAN OCEAN, BRITISH WOMAN TRAVELLER, BRITAIN, BRITANNICA, EDWARDIAN ERA,HANDWRITTEN, MANUSCRIPT, AUTOGRAPHED, AUTHORS, DOCUMENT, LETTER, AUTOGRAPH, KEEPSAKE, WRITER, HAND WRITTEN, DOCUMENTS, SIGNED, LETTERS, MANUSCRIPTS, HISTORICAL, HOLOGRAPH, WRITERS, AUTOGRAPHS, PERSONAL, MEMOIR, MEMORIAL, PERSONAL HISTORY, ARCHIVE, DIARY, DIARIES, JOURNAL, LOG, PRIMARY SOURCE, FIRST HAND ACCOUNT, SOCIAL HISTORY, PERSONAL STORIES, LIVING HISTORY, ANTIQUITÉ, CONTRAT, VÉLIN, DOCUMENT, MANUSCRIT, PAPIER ANTIKE, BRIEF, PERGAMENT, DOKUMENT, MANUSKRIPT, PAPIER OGGETTO D'ANTIQUARIATO, ATTO, VELINA, DOCUMENTO, MANOSCRITTO, CARTA ANTIGÜEDAD, HECHO, VITELA, DOCUMENTO, MANUSCRITO, PAPEL,BIOGRAPHY BIOGRAPHICAL AUTOBIOGRAPHICAL AUTOBIOGRAPHY PERSONAL NARRATIVES

Title: 1912 ORIGINAL TWO VOYAGE MANUSCRIPT DIARY: AUSTRALIA TO LONDON, THEN LONDON TO CALCUTTA WITH DESCRIPTIONS OF ALL POINTS AND PORTS IN BETWEEN

1912 ORIGINAL TWO VOYAGE MANUSCRIPT DIARY: AUSTRALIA TO LONDON, THEN LONDON TO CALCUTTA WITH DESCRIPTIONS OF ALL POINTS AND PORTS IN BETWEEN