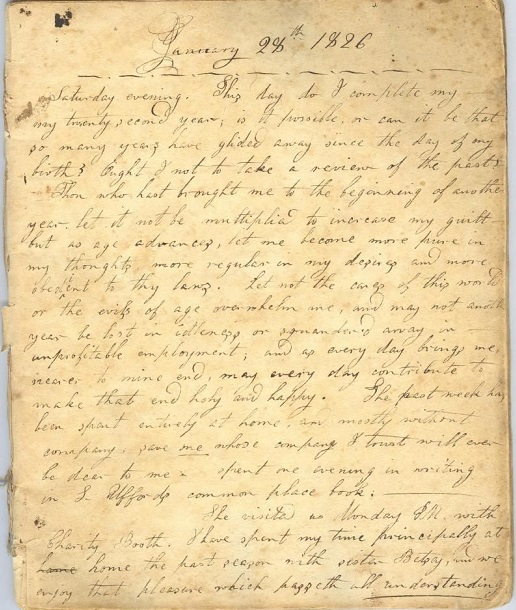 On offer is a fascinating, original early 19th Century 38 page manuscript diary handwritten by a 21 year old female member of the Deforest family, we believe, and living in and around Stratford Connecticut. Dated January 1826 through February 1827 we surmise she is a novice or novitiate [she is allowed home] in a not too faraway convent with frequent mentions Sister Maria, Sister Betsey, etc., and that she sits in her 'chamber' window' etc. That said she still has a life and family outside of the convent with travels to Milford, Bridgeport, Putney [north end of Stratford], and of course many, many mentions of the people around her: a friend Maria Hovey, S. Alffords, Rev. Mr. Judah, Joseph Tomlinson, Mary Mills, Mr. Levitt, Mr. Rutledge, Sarah Lewis, O. Beardslee, Mrs. Birdseye, cousins: Eliza and Sarah Deforest, Mary Deforest, Jane Mills, Delia Deforest, Uncle and Aunt Beers, Aunt Pendleton +++. Activities include religious sermons and musings, visits from family and friends, domestic pursuits such as spinning, sewing and quilting, news of sickness, manning a charity booth, deaths and a wedding. She also refers to "Bracebridge Hall, or The Humorists, A Medley was written by Washington Irving in 1821, while he lived in England, and published in 1822. This episodic novel was originally published under his pseudonym Geoffrey Crayon." The 6¼ x 7½ inch book is missing its covers has some minor wear and soiling, but overall G.

Title: 1826 - 1827 ORIGINAL MANUSCRIPT DIARY HANDWRITTEN BY A YOUNG WOMAN WHO SHUTTLES BACK AND FORTH BETWEEN HER CHAMBER AT THE CONVENT AND HER FAMILY HOME