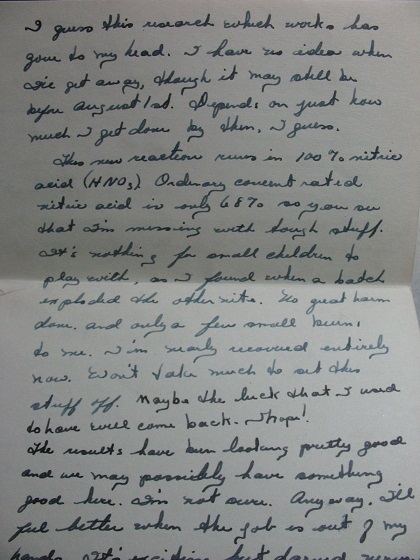 On offer is a significant, original group of eight [8] manuscript letters handwritten by Purdue University scientist Warren R. Grimes to his girlfriend Dorothy Jean Hendrickson from November 1942 to November 1945. Of particular interest to historians and researchers will be the intimacy of the letters revealing what many might consider highly important and secretive work as part of the war effort by this young man and the fact that none of these letters have been censored and it appears he was working on some highly important research likely with regard to the Atomic bomb even mentioning a new reactor that runs on 100% nitric acid and or radar as Purdue University did much work in these areas. He confides to his girlfriend: 'I am messing with tough stuff, batch exploded, got a few burns. [He] will stay with this research until something happens. There are a few guys who believe that this problem can be solved, it can. So much work to do in little time.' When at Oak Ridge he states: 'It will not make us famous if it works, but it will be some satisfaction to us, I wish I could tell you about Dear, maybe I can sometime.' Unsatisfied with what he feels is an inactive roll he writes about wanting to join the Army but due to his Occupational Status of "Men Needed in Their Civilian Activity" the Government deferred him, Status of 2A as his civilian work was more important for the War Effort. He states in one letter that he could have be in uniform next week but that seems sort of selfish, I decided some time ago to be a Chemist, and spent time trying to be a good one. Overall G+.; Manuscript; 4to - over 9¾" - 12" tall; KEYWORDS: HISTORY OF, WARREN R. GRIMES, PURDUE UNIVERSITY, SCIENTIST, DEPARTMENT OF CHEMISTRY, PURDUE CYCLOTRON,CHEMISTS, PHYSICISTS, ATOMIC BOMB, OAK RIDGE, TENNESSEE, MANHATTAN PROJECT, RADAR, WAR EFFORT, NUCLEAR BOMBS, DOROTHY JEAN HENDRICKSON, WWII, WW2, WORLD WAR 2, WORLD WAR II, TOP SECRET, AMERICANA,HANDWRITTEN, MANUSCRIPT, AUTOGRAPHED, AUTHORS, DOCUMENT, LETTER, AUTOGRAPH, KEEPSAKE, WRITER, HAND WRITTEN, DOCUMENTS, SIGNED, LETTERS, MANUSCRIPTS, HISTORICAL, HOLOGRAPH, WRITERS, AUTOGRAPHS, PERSONAL, MEMOIR, MEMORIAL, PERSONAL HISTORY, ARCHIVE, DIARY, DIARIES, JOURNAL, LOG, PRIMARY SOURCE, FIRST HAND ACCOUNT, SOCIAL HISTORY, PERSONAL STORIES, LIVING HISTORY, ANTIQUITÉ, CONTRAT, VÉLIN, DOCUMENT, MANUSCRIT, PAPIER ANTIKE, BRIEF, PERGAMENT, DOKUMENT, MANUSKRIPT, PAPIER OGGETTO D'ANTIQUARIATO, ATTO, VELINA, DOCUMENTO, MANOSCRITTO, CARTA ANTIGÜEDAD, HECHO, VITELA, DOCUMENTO, MANUSCRITO, PAPEL,BIOGRAPHY BIOGRAPHICAL AUTOBIOGRAPHICAL AUTOBIOGRAPHY PERSONAL NARRATIVES

Title: 1942 - 1945 ORIGINAL GROUP OF EIGHT [8] MANUSCRIPT LETTERS HANDWRITTEN BY A PURDUE UNIVERSITY CHEMIST WORKING ON TOP SECRET PROJECTS LIKELY THE ATOMIC BOMB WHO SHARES MANY DETAILS WITH HIS GIRLFRIEND IN UNCENSORED LETTERS