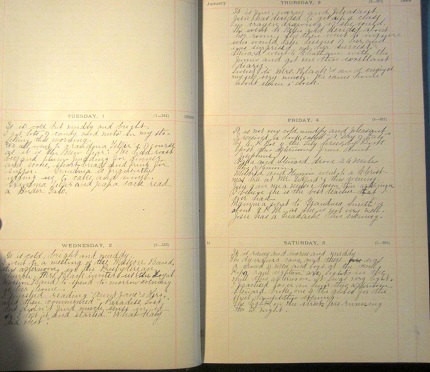 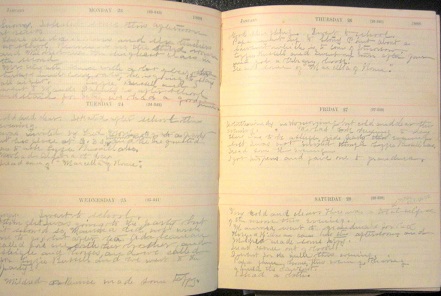 1888 + 1889 ORIGINAL PAIR [2] OF SOUTH WESTERN ONTARIO MANUSCRIPT DIARIES HANDWRITTEN BY A YOUNG, INORDINATELY MATURE 12 YR OLD GIRL WHO GOES FROM PLAYING GAMES AT RECESS TO DISCUSSING THE SCOTT ACT OF 1888 FOR TEMPERANCE IN KENT COUNTY

On offer are a superb pair [2] of original 1888 and 1889 manuscript diaries handwritten by Miss Maud[e] May Telfer a young woman born May 18th 1875 in Blenheim, Kent, in south-western Ontario. A very mature girl of 12 when the writings start January 2nd of 1888 it appears a much younger hand has inscribed the book as 'Private Maude's' on the title page. Thereafter Maud proves to be a dedicated diarist, rarely missing a day and describing all her daily doings from school, visits, travel and she does a yeoman job naming all her family, friends and visitors. Readers of Maud's diaries will find her to be rather exceptional. On the one hand she is like all girls of her age interested in playing at recess, consulting with her girlfriends, cheering on her baseball team. Just as easily she writes of Temperance and the politics of the Scott Act to her loan arrangement with her father repaying her $7.26 being the interest and capital repaid after a $6.00 one year loan she provided him. [Casual research into her family found that her father James Telfer was an inventor and we note Maud makes note of his, we believe, first invention late in 1889.] The 1888 book is an 8 x 6 inch and is over a hundred pages completely full. The 1889 book is a very large, 13 x 8 inch 'Daily Journal' diary again completely filled. Here are some snippets: 'I moved that we should get up a society and Flora seconded it so we voted Flora as President, Lizzie Secretary, Maude Vice President and myself Treasurer…Went up the station and saw Dr Oliver Steward and his bride got away. There was a walking race in the ? for fifteen hours…Rennie got the Pilgrim's Progress at Sunday School yesterday and I read some of it…I went to a Missionary Meeting in the Presbyterian Church and joined a society. Lizzie Russell and I went to see Flora this evening who was sick with a cold and sore throat. There was an excursion to Detroit today but none of us went on it. Papa went to Detroit but not with the excursions… Afterwards I went to the Fairground to see the Lacrosse match between Blenheim and Ridgetown, Blenheim boys won of course. After tea we went to a Free Social in the Methodist Church and a programme afterwards. It was an ice cream social, Mr Livingston's farewell one…Mr Liv received a gold headed can his wife a purse…A message came to Josie this morning that Mr JS Bell is dead and so they are not going on a fishing excursion today…We reached Detroit between 12 and 1 o'clock. We went to a restaurant and had what we chose some things which were on the bill, I had a sandwich and a coffee. We went to a dime museum and saw lots of curiosities… 1889 Mr Martyn an elocutionist and ventriloquist visited our school this afternoon. He rendered two recitations besides Sunday other things….This evening papa, Stewart and Rennie went to Ridgetown the two former on business…I went to school there are not many at school. Measles are breaking out on Rennie. I read part of the Red House in Suburbs by Mrs O'Reilly Maude and I had a spat over Authors. I broke a piece off of a nice vase. I went and bought another vase which was some satisfaction… Grandpa Smith started for Montreal this morning. I washed my hair this morning with sulphur soap, Mr Waddel called the afternoon and lent Josie and illustrated book…Maudie Matthew's is getting the measles Mildred is just getting the measles Vera is covered with measles Mamma thinks I am getting the measles…This afternoon I went to a meeting of the mission band at the Presbyterian Church…Did some errands uptown this evening and then went to an envelope social of the mission band at Miss Engles…Josie went with several others to a temperance lecture at the Grange Hall and got back about 12…I went to school, Lizzie and I sat in the back seat and Lizzie accidentally tipped the seat and I landed on the floor but soon recovered. Josie and Mamma went to the temperance lecture this evening. I read some of a temperance book…This is the day in which to decide whether the Scott Act is to become law in the County of Kent or not. There is on this account an all day prayer meeting in the Baptist Church by the WCTU. Josie went to it this evening and played for about an hour on the organ…The Scott act had been defeated by a majority of 23. There was a great talk about temperance in school. The boys put For Act and Against Act on the blackboard and we were to put a cross under the side we were…We went to school we played baseball some of the boys played with us. It is fun and a good experience.' Save for some general ageing and the covers being scuffed and rubbed the books are overall G+.; Manuscript; Folio - over 12" - 15" tall; KEYWORDS: HISTORY OF, MAUD MAY TELFER, MAUDE MAY TELFER, JAMES TELFER, INVENTOR, PATENTS, BLENHEIM, CHATHAM, SOUTHWESTERN ONTARIO, RIDGEWAY, SARNIA, DETROIT, STONEY POINT, INVENTORS, POST CONFEDERATION, CANADA, CANADIANA, HANDWRITTEN, MANUSCRIPT, AUTOGRAPHED, AUTHORS, DOCUMENT, LETTER, AUTOGRAPH, KEEPSAKE, WRITER, HAND WRITTEN, DOCUMENTS, SIGNED, LETTERS, MANUSCRIPTS, HISTORICAL, HOLOGRAPH, WRITERS, AUTOGRAPHS, PERSONAL, MEMOIR, MEMORIAL, PERSONAL HISTORY, ARCHIVE, DIARY, DIARIES, JOURNAL, LOG, PRIMARY SOURCE, FIRST HAND ACCOUNT, SOCIAL HISTORY, PERSONAL STORIES, LIVING HISTORY, ANTIQUITÉ, CONTRAT, VÉLIN, DOCUMENT, MANUSCRIT, PAPIER ANTIKE, BRIEF, PERGAMENT, DOKUMENT, MANUSKRIPT, PAPIER OGGETTO D'ANTIQUARIATO, ATTO, VELINA, DOCUMENTO, MANOSCRITTO, CARTA ANTIGÜEDAD, HECHO, VITELA, DOCUMENTO, MANUSCRITO, PAPEL,BIOGRAPHY BIOGRAPHICAL AUTOBIOGRAPHICAL AUTOBIOGRAPHY PERSONAL NARRATIVES

Title: 1888 + 1889 ORIGINAL PAIR [2] OF SOUTH WESTERN ONTARIO MANUSCRIPT DIARIES HANDWRITTEN BY A YOUNG, INORDINATELY MATURE 12 YR OLD GIRL WHO GOES FROM PLAYING GAMES AT RECESS TO DISCUSSING THE SCOTT ACT OF 1888 FOR TEMPERANCE IN KENT COUNTY

1888 + 1889 ORIGINAL PAIR [2] OF SOUTH WESTERN ONTARIO MANUSCRIPT DIARIES HANDWRITTEN BY A YOUNG, INORDINATELY MATURE 12 YR OLD GIRL WHO GOES FROM PLAYING GAMES AT RECESS TO DISCUSSING THE SCOTT ACT OF 1888 FOR TEMPERANCE IN KENT COUNTY