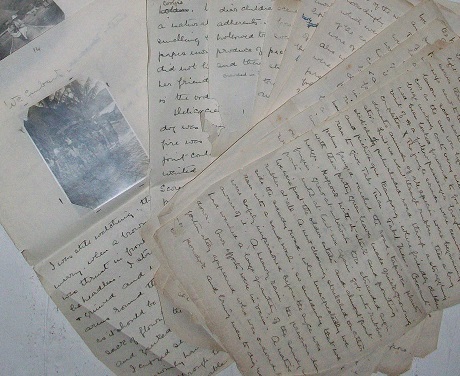 By: MARY or MARGARET DISCON [?]

On offer is a super, original 1922 manuscript diary of a woman who we believe is named Margaret or Mary Discon. [While she has not identified herself she does seem to refer to herself at some point in the third person.] The diary describes her time spent in Kampong, Singapore near Saribue Dolok. Using 8½ x 14 inch sheets of paper, folded but loose, she describes her time over 17 pages with some photos as titled: "A Day at _____gale." While the first part of the place name is difficult to read we are sure that local researchers and historians will no doubt uncover the location especially given the detailed clues leading up to the spot. Here are some snippets: "It was with gay hearts that we sat in the lamplight making the best breakfast we could with nerves thrilling in anticipation of the days jaunt while the boy and his wife saw to the storing of baskets of provisions; lemons, soda waters, etc., etc. We stepped into the car as the sun was lighting the east and a cool breeze making coats very necessary. Our days outing had been looked forward to for weeks and the visit of a fellow passenger brought the journey to completion. The jungle sounds were ceasing and domestic animals of all specimens were beginning to stir. First we went through rubber then a long street of palm shaded road through a struggling and picturesque Kampong….." Their car gets stuck in the mud and they have to have the village people dig them out: "….we reached Saribue Dolok which seemed to consist solely of a large store and a missionary's house but they usually have been native Kampong's hidden in the hollows here and there for we saw numerous parties of Balaks silently following each other to the market in Indian file….." (They are now on their way to a volcano. Also describes the natives clothing. Back to Kampong.) "The Kampong of Harring all lies just above the shore, guarded by banyan trees. The rest house is a pleasant little bungalow provided by the Dutch government for visiting officials and lent for a small fee to any traveler. Here we found contrary to repost that a well supplied table was provided….We crossed a small stream, the stream was small but gully was broad, by a bridge consisting of two thin tree trunks on one side of which was a low rattan rope which gave us help and hardly any confidence…." They finally board a boat and she mentions how the crowds of people started gathering to watch them and has a photo showing just this scene. They finally return to the rest house. The diary pages were folded, actually misfolded and the edges of the pages are a bit brittle and chipped with some little loss but overall Fair+.

Title: 1922 ORIGINAL MANUSCRIPT DIARY DESCRIBING A DAY SPENT TRAVELING AND VISITING A VILLAGE IN SINGAPORE NEAR SARIBUE DOLOK BY AN UNUSUALLY OBSERVANT AND INTREPID BRITISH WOMAN