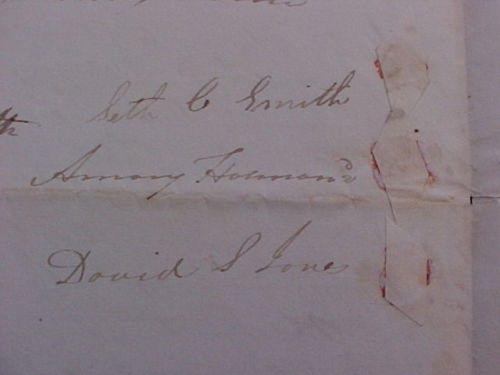 On offer is a super, original 19th Century manuscript relic of maritime trade and commerce being a two [2] page hand written agreement dated December 9, 1829 between Seth C. Smith of New Salem, Massachusetts and Amory Holman of Bolton, Massachusetts. The agreement is for Seth Smith to "convey the United States Mail from New Salem to Bloody Brook for three years from the first day of January must be completely secure from water or damage by an oil cloth or leather canvasing equably to and consistent with mail contract made by said Amory Holmann by the post office appointment..." The two page document was witnessed by Edward Smith and signed and sealed by Seth c. Smith, Amory Holmann and David S. Jones. Each page measures 7 1/2 x 12 inches. There are a few small tears in the folds but overall G. HISTORICAL NOTE 1: The Battle of Bloody Brook was fought on September 12, 1675 between English colonial militia from the Massachusetts Bay Colony and a band of Indians led by the Nipmuc sachem Muttawmp. The Indians ambushed colonists escorting a train of wagons carrying the harvest from Deerfield to Hadley during King Philip's War. They killed at least 40 militia men and 17 teamsters out of a company that included 79 militia. HISTORICAL NOTE 2: One online source provides: Also contributing to the thriving local business was the fact that Silas Holman and his son, Gen. Amory Holman, who in 1818 succeeded his father as owner of the most well-known establishment, the Holman Inn, had controlling interests in some of the regional stagecoach lies. This arrangement ensured not only that stagecoaches would stop here, but that the Holmans' other enterprises, including a blacksmith shop and harness shop, would have plenty of work servicing the coaches and horses. Then, in 1827, Amory Holman founded the large Bolton & Lancaster Stage Company, with headquarters at the inn. Business again increased when, in 1832, Gen. Holman received contracts to carry the mail from Boston to Albany and to Brattleboro, Vermont. He eventually sublet twelve subsidiary lines to his coach drivers.