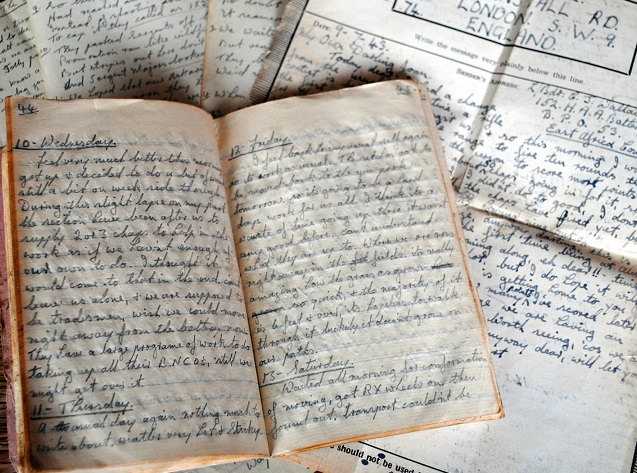 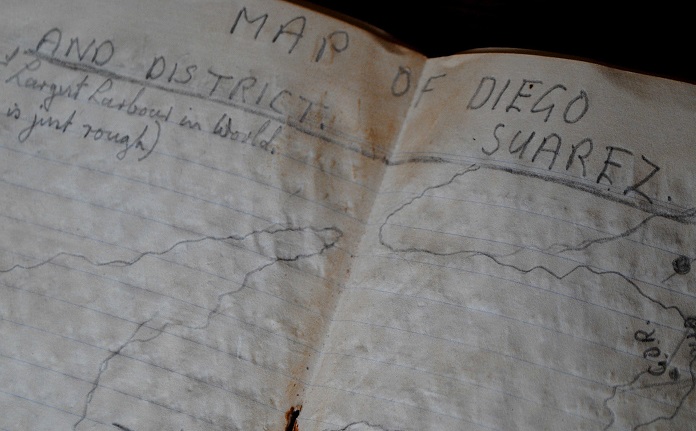 On offer is a super, original manuscript diary and World War II relic of one British man's unwelcome service as a Gunner for His Majesty's Army in the East Africa Command. Handwritten by Gunner C.J. Wallace O.F.C. [Ordnance Factory] 1612928 while serving in Diego Suarez Madagascar the diary is kept in a small notebook and very neatly covers the six month period from January 1st 1943, four days before they embark by ship for Madagascar, to June 30th, at which point it ends because the book is full at 120 well filled pages. Madagascar was prior to early 1942 a French colony and Churchill feared that Vichy France would allow the Japanese to use the island as a base for operations in the Indian Ocean. This fear led to a British and Allied offensive in the spring of 1942 which successfully led to the invasion of the island. Wallace of the 152 E.A.H.A.A. Battery [152 East Africa Heavy Anti Aircraft Battery] was part of the East Africa Brigade based at the most important harbour, Diego Suarez, on the northern tip of the island and part of the all important defenses of Britain's strengthening hold of the area. He served as part of heavy artillery crew whose job was to defend against enemy aircraft or shipping. During the period of the diary there is little action save for a couple of times enemy aircraft flew over Diego Suarez and at one point there is concern over a ship sighted offshore but this proves not to be an enemy craft. The only "action" involves local people accidentally wounded during a training exercise. The diary does a superb job relating the day-to-day grind of an overseas posting. You get a real sense of the relentlessness of it all and it reflects the joyless, powerless, day-to-day experience of many young conscripts. The writer is bored, homesick and miserable. He and his comrades are often ill with diarrhoea or malaria. There is a constant low level grumbling: the weather; the filth, the squalor of the local town, the privations of the accommodation, the poor food, the failure of the army to keep his pay up to date, the poor transport infrastructure, the behaviour of the natives, the behaviour of the officers and - most of all - the constant, pointless emphasis on petty regulation and "spit and polish". There are numerous passages in the diary which could illustrate this. Here is a snippet: 'We had to change our beds today, for three planks of wood, everybody must have the same, even if you were nice and comfortable before. Just like our battery. I suspect it's all Godfrey's doings, even if you have your own camp bed, when the day comes for inspection, you have to hide it and show three planks with kit on.' Several times the author writes simply and rather movingly that he just wishes he could go home to his wife, Joan, whom he misses greatly. The only high points are the regular games of football, listening to the wireless when it works and a two week leave period at the town of Joffreville in a converted sawmill established to enable soldiers to request and recuperate. In June a brothel, "licensed by army medical authorities" with "white and almost white girls" opened in Diego Suarez for the use of officers. The writer hears rumours that a brothel for other ranks will follow with "girls from Kenya" but he finds this an appalling prospect. The diary is a small notebook with 104 pages, all of which are fully written on. There are no missing or damaged pages but the covers are detached from the single staple which holds the notebook together. Tucked in the diary is an abandoned draft of a letter from the author to his wife in south London, plus a couple of simple, rhyming poems in which the writer expresses his cynicism about the army life. He suggests the regimental motto should be "Semper in Excreta"! Overall G.; Manuscript; 16mo - over 5¾" - 6¾" tall; KEYWORDS: HISTORY OF, C.J. WALLACE, EAST AFRICA HEAVY ANTI AIRCRAFT BATTERY DIEGO SUAREZ, E.A.H.A.A. BATTERY, GUNNERS, GUNNERY, ARTILLERY, INFANTRY, OPERATION IRONCLAD, OPERATION STREAMLINE JANE, ANTSIRANANA, MADAGASCAR, WW2, WWII, INDIAN OCEAN, SOUTH ASIA, WORLD WAR 2, WORLD WAR II, BRITISH FORCES IN DIEGO SUAREZ, GUNNER C.J. WALLACE O.F.C. 1612928, ENGLAND VS JAPAN, HANDWRITTEN, MANUSCRIPT, AUTOGRAPHED, AUTHORS, DOCUMENT, LETTER, AUTOGRAPH, KEEPSAKE, WRITER, HAND WRITTEN, DOCUMENTS, SIGNED, LETTERS, MANUSCRIPTS, HISTORICAL, HOLOGRAPH, WRITERS, AUTOGRAPHS, PERSONAL, MEMOIR, MEMORIAL, PERSONAL HISTORY, ARCHIVE, DIARY, DIARIES, JOURNAL, LOG, PRIMARY SOURCE, FIRST HAND ACCOUNT, SOCIAL HISTORY, PERSONAL STORIES, LIVING HISTORY, ANTIQUITÉ, CONTRAT, VÉLIN, DOCUMENT, MANUSCRIT, PAPIER ANTIKE, BRIEF, PERGAMENT, DOKUMENT, MANUSKRIPT, PAPIER OGGETTO D'ANTIQUARIATO, ATTO, VELINA, DOCUMENTO, MANOSCRITTO, CARTA ANTIGÜEDAD, HECHO, VITELA, DOCUMENTO, MANUSCRITO, PAPEL,BIOGRAPHY BIOGRAPHICAL AUTOBIOGRAPHICAL AUTOBIOGRAPHY PERSONAL NARRATIVES