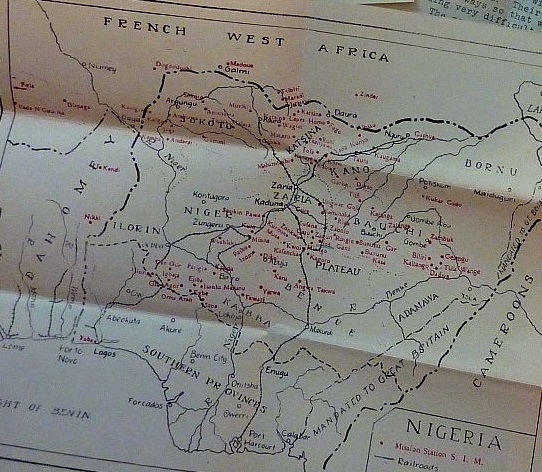 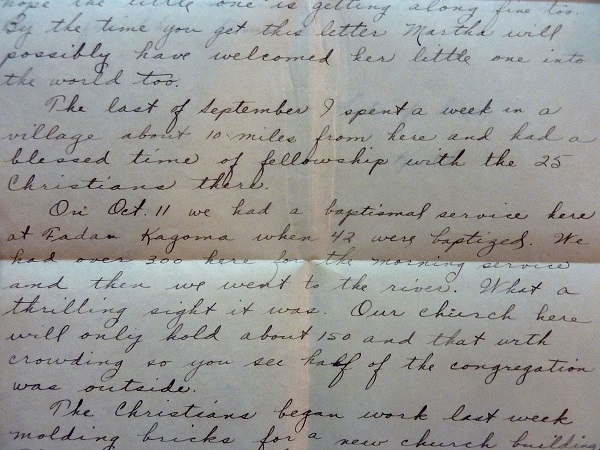 On offer is a super group of 12 fascinating, original manuscript and typed letters written by American missionary Ruth Warfield [born circa 1910] of the Sudan Interior Mission from northern Nigeria, British West Africa circa 1942 - 1949. The letters are full of insightful and significant entries detailing her life as a missionary in remote parts of Nigeria in the 1940s with the looming backdrop of World War II. Wonderfully detailed we learn that she travels by bicycle, takes her Hausa [native language] exams, mentions the conditions of fellow missionaries visits remote villages, a large baptismal of 300, a tragedy at a village where fire had destroyed the entire area, a plan of new church building and use of made bricks. A letter of her recent visits with Miss Helen Watkins who fell ill, and needed to get to a remote clinic. She mentions the death of Dr. Stirrett's in detail at his home in Nigeria and subsequent funeral. There are some very detailed descriptions of long journeys into remote areas by bicycle or on foot these are her long trips visiting SIM schools with a Miss Watkins a fellow missionary. A nice map is included on hand laid paper of Nigeria showing SIM mission stations. Here are some snippets: Sudan Interior Mission Jos, Nigeria, British West Africa 1948 "On our arrival at Zampur Helen became very ill with a high temperature and a bad chest cold The next day she developed Pleurisy and for several days couldn't even turn over in bed with out help. There we were miles out in the bush and there was no possible way to move her and get her to a doctor." "Just about two weeks ago now Miss Watkins and I drove up to Kono, 372 miles from here .She had to go to help give some of our missionaries their second Hasa exam examination and since she has an infection in her foot and had orders from her doctor to stay off her feet, I did the driving. Roni is 60 miles from Kano. On that road besides the washboards. There are holes and if we went to fast to avoid the washboards we hit these holes, and if we went to slow we bounded all over the place. The boys in the Roni School are all waifs that have been sent from." British West Africa 1949 "These past few weeks have been busy ones for me. I went out on trek the last of Oct. and was gone for two weeks. I spent five days in one village where no white person had ever slept before. I stayed in the chiefs compound in a grass hut- grass mats formed the walls and than there was a grass roof. I certainly was a curiosity as was everything I had and did. I woman asked me if I had toes on my feet like they did? SO I proceeded to show her!" "When we reached the town we found that disaster struck. The people had been dismayed a week or so earlier because of several sudden deaths in the town, and now just the night before I reached there, fire had swept through and nearly half the town. Most of the people had lost everything. The roofs were made of grass and so burned readily, and many had dug out the back walls of the houses to save their own lives and what possessions they could. We are out traveling again as usual and have been away from Jos now for over three weeks. This has been a hard trip and it seems everything has gone wrong. First we had trouble with the car. Then I went to a school where I had to walk just over four miles not far, but it was up one steep hill, and down another. In getting there I was soaked through with dew and coming back drenched with rain. Another school I had to get to be 12 miles from where we were staying. Another school I was trying to get to be about 8 miles to get there and was carried on the back of an African across five streams." BACKGROUND NOTES: One online source provides: Lifelong Missionaries: Women Return to Africa and 'a Place in the Heart' November 25, 1987 MICHAEL GRANBERRY Times Staff Writer: Helen Watkins, 83, and Ruth Warfield, 77, have crisscrossed Africa on bicycle and foot, by car and train. They have eluded pagan spirit warriors and towed 17-foot mobile homes over choppy African roads. They have heard the too-near roar of lions. They've brought the Gospel of Jesus into Muslim-controlled areas and faced what they termed "serious hostility." They persuaded the men of the Kagoro tribe to stop beating their wives, only to be told by one man, "We don't know if we like this Christianity. How can we free ourselves . . . of our frustrations?" Watkins and Warfield are lifelong missionaries, retired and out of Africa since 1979. They live in Carlsbad in a mountainside development owned by Sudan Interior Mission, the interdenominational delegation both have served for more than three decades. Recently, they decided to go back to Africa--for a three-month visit. "Imagine that, 'at their age,' " Warfield said. "I'm sure people will think that; some may even say it. But we feel great. We can't wait to get on that plane." Overall VG.; Manuscript; 8vo - over 7¾" - 9¾" tall; KEYWORDS: HISTORY OF, RUTH WARFIELD, MISSIONARY, MISSIONARIES, SUDAN INTERIOR MISSION, NIGERIA, HAUSA, YAREN HAUSA, HARSHEN HAUSA, CHADIC LANGUAGE, AFRO-ASIATIC LANGUAGE, BRITISH WEST AFRICA, DR. STIRRETT, CHRISTIAN OUTREACH, PROSELYTIZING, EVANGELICALS, EVANGELICAL RELIGION, CHRISTIANITY, HELEN WATKINS, AFRICANA, AMERICANA,HANDWRITTEN, MANUSCRIPT, AUTOGRAPHED, AUTHORS, DOCUMENT, LETTER, AUTOGRAPH, KEEPSAKE, WRITER, HAND WRITTEN, DOCUMENTS, SIGNED, LETTERS, MANUSCRIPTS, HISTORICAL, HOLOGRAPH, WRITERS, AUTOGRAPHS, PERSONAL, MEMOIR, MEMORIAL, PERSONAL HISTORY, ARCHIVE, DIARY, DIARIES, JOURNAL, LOG, PRIMARY SOURCE, FIRST HAND ACCOUNT, SOCIAL HISTORY, PERSONAL STORIES, LIVING HISTORY, ANTIQUITÉ, CONTRAT, VÉLIN, DOCUMENT, MANUSCRIT, PAPIER ANTIKE, BRIEF, PERGAMENT, DOKUMENT, MANUSKRIPT, PAPIER OGGETTO D'ANTIQUARIATO, ATTO, VELINA, DOCUMENTO, MANOSCRITTO, CARTA ANTIGÜEDAD, HECHO, VITELA, DOCUMENTO, MANUSCRITO, PAPEL,BIOGRAPHY BIOGRAPHICAL AUTOBIOGRAPHICAL AUTOBIOGRAPHY PERSONAL NARRATIVES

Title: 1942 -1949 ORIGINAL GROUP OF 12 DIARY LIKE LETTERS HANDWRITTEN BY A NOTED MISSIONARY BRINGING CHRISTIAN AID AND EDUCATION IN PARTS OF NIGERIA AND THE SUDAN WHERE NO WHITE PEOPLE HAVE BEEN SEEN BEFORE