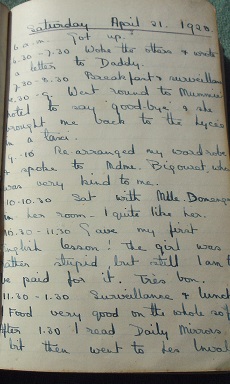 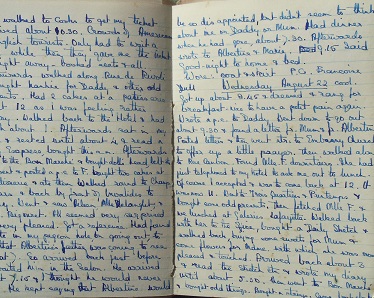 On offer is a charming, original manuscript dairy handwritten by a young British, we believe, woman in Paris France employed to teach English at the Lycee April 21st to August 22nd 1928. While the author's name is unknown even a casual read reveals the woman as each day is a complete daily record of everything she did from when she woke up until she went to bed, including details of her duties, where she went, lessons and daily duties, what she wore and even some 'insider' school politics or drama etc. making for a fascinating, very detailed account of her experience at the Lycee in Paris. But much more than that the writer is an enthusiastic tourist too doing the French experience to the ultimate in her free time and describing it all in sparkling narrative. Historians and researchers of Paris in 1928 will acknowledge that the City of Light was at the epicentre of critical literature and art and the ascending star of post World War I Europe. The 7 x almost 5 inch leather notebook has some wear and top and bottom spine loss to the covers and the occasional marking where she kept flowers between the pages and some pages are loose but all complete. Overall G.; Manuscript; 12mo - over 6¾" - 7¾" tall; KEYWORDS: HISTORY OF, ENGLISH TEACHER, PARIS, LYCEE, POST WORLD WAR I EUROPE, FRANCE, LA VILLE-LUMIÈRE, CITY OF LIGHT, GENDER STUDIES, WOMEN'S STUDIES, HANDWRITTEN, MANUSCRIPT, AUTOGRAPHED, AUTHORS, DOCUMENT, LETTER, AUTOGRAPH, KEEPSAKE, WRITER, HAND WRITTEN, DOCUMENTS, SIGNED, LETTERS, MANUSCRIPTS, HISTORICAL, HOLOGRAPH, WRITERS, AUTOGRAPHS, PERSONAL, MEMOIR, MEMORIAL, PERSONAL HISTORY, ARCHIVE, DIARY, DIARIES, JOURNAL, LOG, PRIMARY SOURCE, FIRST HAND ACCOUNT, SOCIAL HISTORY, PERSONAL STORIES, LIVING HISTORY, ANTIQUITÉ, CONTRAT, VÉLIN, DOCUMENT, MANUSCRIT, PAPIER ANTIKE, BRIEF, PERGAMENT, DOKUMENT, MANUSKRIPT, PAPIER OGGETTO D'ANTIQUARIATO, ATTO, VELINA, DOCUMENTO, MANOSCRITTO, CARTA ANTIGÜEDAD, HECHO, VITELA, DOCUMENTO, MANUSCRITO, PAPEL,BIOGRAPHY BIOGRAPHICAL AUTOBIOGRAPHICAL AUTOBIOGRAPHY PERSONAL NARRATIVES