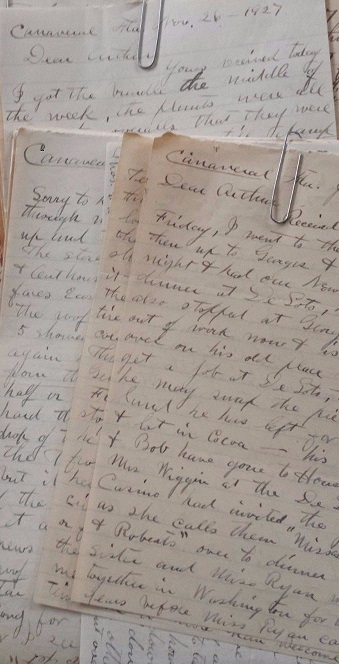 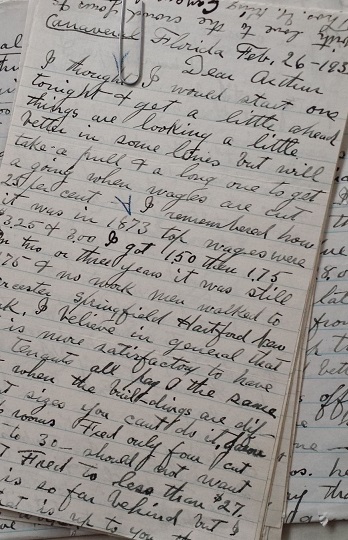 1895 - 1930s SUPER, ORIGINAL ARCHIVE OF LETTERS, DOCUMENTS AND EPHEMERA BY AN EARLY SETTLER OF TITUSVILLE AND CAPE CANAVERAL FLORIDA

On offer is a sensational, original, significant archive of manuscript letters, maps and documents handwritten primarily by Thomas Y. King of Waltham, Massachusetts who was an early pioneer of Canaveral Florida well before the area achieved fame as Cape Canaveral the launching pad to some of America's greatest dreams and accomplishments and even tragedies. In the late 1800s the Cocoa Beach - Titusville region was an essentially unpopulated, forested place. With the dream that the port at Cape Canaveral, due to its depth and overall excellence, would make him millions, Thomas Y. King, in 1895, came from Waltham Massachusetts bought a parcel of land on the beach of what is now the Port St. John region between Titusville and Cocoa [Section 6-7, Township #23, Range 38 East of Tallahassee Meridian, Brevard County] and built a crude house, farm and eventually a road leading out to Titusville that would serve him until the 1930s. [This road was later renamed King's Highway and is a busy thoroughfare in Titusville today.] He also built the first schoolhouse the area had in 1896. He and his son lived there until they returned to Waltham in 1900 and then 21 years later they returned permanently after he retired. Much of the archive involves the correspondence he maintained with his brother: 200+ letters, approximately 350 handwritten pages making for an unparalleled look into life in the region by an erudite, observant pioneer with perfect timing given the land boom there in the 1920s. After his death in the late 1930s, his son, Arthur King, began to write down what he remembered of those very early days. He drew a map of the 10 or so people who were his father's neighbors, described the first schooling down there after his father built the schoolhouse, and contacted the Space/Science writer Martin Caiden, who was writing a book on the area in 1958. He provided Mr Caiden with very important information on the pioneer period, for which Mr Caiden wrote him back, thanking him for the great information he was provided. INVENTORY: 200+ handwritten letters totalling 350 pages written from 1921-1933, from Canaveral to his brother in Waltham; 1896 US Government General Land Office Homestead Land Grant Certificate selling said land to Thomas Y. King signed by President Grover Cleveland (Secretary signed); Certificate Of Title for these lands issued by Brevard Abstract Title Ins Co Titusville, and over 15 maps of these land plots; 3 Warranty Deeds selling land owned by Thomas Y. King to Livingston Vann, George Kimball, and the Desoto Beach Improvement Co of Orlando (1925-1930); 20+ pages of handwritten reminiscences written by the son of Thomas Y. King, Arthur N. King, to writer Martin Caiden documenting life in Canaveral in 1894-1895, when he attended the first school there, and watched and helped his father buy and build and farm what was among the first standing structures in the region. It includes two hand drawn maps: 1 of Thomas King's house, the other a map of the first settlers of Canaveral, among whom were Shorty Johnson and Captain Penney (who built the first pier there), his immediate neighbors, who were the first to settle the area. It also includes a thank you letter from Caiden issued on his letterhead. Overall VG.; Manuscript; 8vo - over 7¾" - 9¾" tall; KEYWORDS: HISTORY OF,THOMAS Y. KING, CAPE CANAVERAL, TITUSVILLE, FLORIDA, COCOA BEACH, PORT ST JOHN, BREVARD COUNTY, MARTIN CAIDEN, ARTHUR KING, NASA, FLORIDA SPACE CENTER, SCIENCE, SPACE FLIGHT, PIONEERS OF FLORIDA, ORLANDO, ATLANTIC COAST OF FLORIDA, AMERICANA, HANDWRITTEN, MANUSCRIPT, AUTOGRAPHED, AUTHORS, DOCUMENT, LETTER, AUTOGRAPH, KEEPSAKE, WRITER, HAND WRITTEN, DOCUMENTS, SIGNED, LETTERS, MANUSCRIPTS, HISTORICAL, HOLOGRAPH, WRITERS, AUTOGRAPHS, PERSONAL, MEMOIR, MEMORIAL, PERSONAL HISTORY, ARCHIVE, DIARY, DIARIES, JOURNAL, LOG, PRIMARY SOURCE, FIRST HAND ACCOUNT, SOCIAL HISTORY, PERSONAL STORIES, LIVING HISTORY, ANTIQUITÉ, CONTRAT, VÉLIN, DOCUMENT, MANUSCRIT, PAPIER ANTIKE, BRIEF, PERGAMENT, DOKUMENT, MANUSKRIPT, PAPIER OGGETTO D'ANTIQUARIATO, ATTO, VELINA, DOCUMENTO, MANOSCRITTO, CARTA ANTIGÜEDAD, HECHO, VITELA, DOCUMENTO, MANUSCRITO, PAPEL,BIOGRAPHY BIOGRAPHICAL AUTOBIOGRAPHICAL AUTOBIOGRAPHY PERSONAL NARRATIVES

Title: 1895 - 1930s SUPER, ORIGINAL ARCHIVE OF LETTERS, DOCUMENTS AND EPHEMERA BY AN EARLY SETTLER OF TITUSVILLE AND CAPE CANAVERAL FLORIDA

1895 - 1930s SUPER, ORIGINAL ARCHIVE OF LETTERS, DOCUMENTS AND EPHEMERA BY AN EARLY SETTLER OF TITUSVILLE AND CAPE CANAVERAL FLORIDA