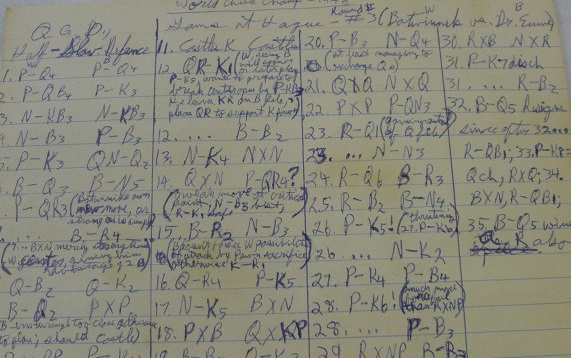 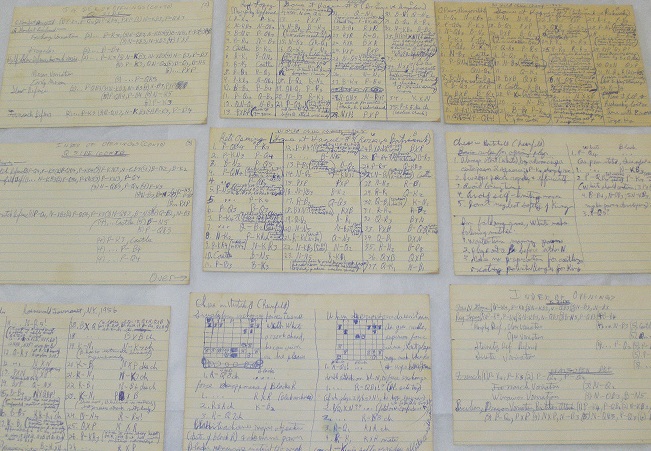 On offer is a super group of 14 index type 4 x 6 inch file cards with copious manuscript notes covering most all of the cards with some on both sides detailing the critical 1948 Chess Championship in the Hague Netherlands which was to determine the new world chess master after the death of Alexander Alekhine in 1946. The unknown author of these notes intriguingly notes when Keres plays against Botvinnik that 'Keres play was inexplicably weak in this game as it always seems to be when he plays Botvinnik.' This remark goes right to the heart of the controversy that has lasted for many years and even today in some player's minds that Keres might have thrown the games. These notes are particularly significant beyond the controversial play by Keres given the state of interregnum caused by the death of Alekhine and the difficulties faced by many countries to send representatives so soon after the end of World War II. Overall VG.; Manuscript; 4 X 6; KEYWORDS: HISTORY OF, CHESS, GRANDMASTER, TOURNAMENT, GRANDMASTERS, RUIZ LOPEZ, WORLD CHESS CHAMPIONSHIP, THE HAGUE, ALEXANDER ALEKHINE, KERES, BOTVINNIK, CONTROVERSY, INTERREGNUM, MANUSCRIPT, HANDWRITTEN, HAND WRITTEN, HOLOGRAPH, AMERICANA, ANTIQUITÉ, CONTRAT, VÉLIN, DOCUMENT, MANUSCRIT, PAPIER ANTIKE, BRIEF, PERGAMENT, DOKUMENT, MANUSKRIPT, PAPIER OGGETTO D'ANTIQUARIATO, ATTO, VELINA, DOCUMENTO, MANOSCRITTO, CARTA ANTIGÜEDAD, HECHO, VITELA, DOCUMENTO, MANUSCRITO, PAPEL,BIOGRAPHY BIOGRAPHICAL AUTOBIOGRAPHICAL AUTOBIOGRAPHY PERSONAL NARRATIVES

Title: 1948 ORIGINAL MANUSCRIPT GROUP OF FILE CARDS DETAILING THE CRITICAL CHESS CHAMPIONSHIPS IN THE HAGUE TWO YEARS AFTER THE DEATH OF ALEXANDER ALEKHINE