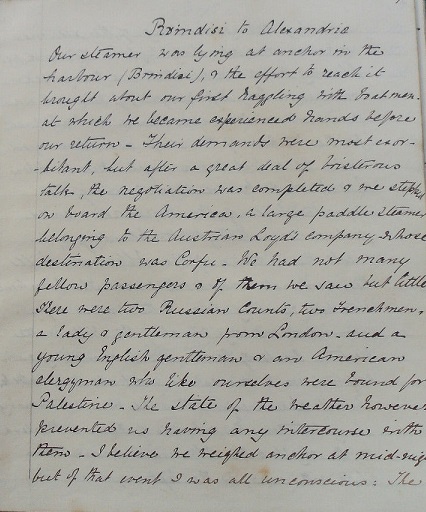 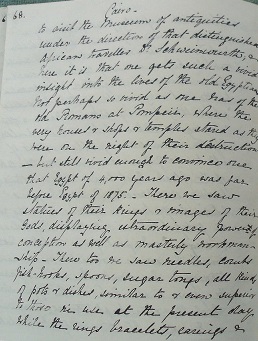 1875 ORIGINAL MANUSCRIPT TRAVEL DIARY HANDWRITTEN BY A KEEN EYED ERUDITE ENGLISHMAN WHOSE TRIP FROM BRINDISI TO ALEXANDRIA IS THWARTED BY THE TRAVEL GENIUS MR. THOMAS COOK

On offer is a superb 130+ page, original 1875 manuscript travel diary handwritten by a man named Oliphant as per the single name inscription and the words 'No.1' though this is the sole book we have. Hand numbered the book begins Brindisi to Alexandria: "Our steamer was lying at anchor in the harbor and effort to reach it brought about our first haggling with boat men at which we became experienced hands before our return. Their demands were most exorbitant but after a great deal of boisterous talk the negotiation was complete and we stepped on board the 'America' a large paddle steamer belonging to the Austrian Lloyds company whose destination was Corfu." What follows are super descriptions and details by this keen eyed, very well educated writer the narrative peppered with large doses of wit and humorous observations. The book is a detailed record of each place visited, including the Sphinx and pyramids, the Cairo streets and bazaars, the people he encountered etc along with his own thoughts and historical references which makes for a super read. In addition he becomes an observer of one of the travel world's most famous names as he makes a number of references to Mr. (Thomas) Cook, not without some little envy as he scrambled for his luggage, when there a separate luggage barge for the sole use of Cook's travelling party. He states that Mr. Cook was being treated like a king his guests there to serve him. [It may not be a surprise the high esteem held in Egypt for the Cooks given the son was described as "the second-greatest man in Egypt". Later during his travels, Mr. Oliphant was not very pleased to learn that Cook had also secured all the first class accommodation for his party leaving him no choice but to travel in lower class. He even named them "cookites" but still wrote of them politely. [This offers some intriguing insight inasmuch Cook had only made his first trip to Egypt a mere 5 years earlier when he made his first trip in 1870.] Here is the enigmatic ending: "On the 9th of March we steamed slowly out of the harbour and soon the lighthouse of Port Said was far behind us and we had left the land of Egypt not indeed so unwillingly as the children of Israel but still with some regret that we had not longer time to see its wonders - it was once the greatest and now the basest of the Kingdoms yet these attaches to it the interest of an hoary antiquity - " We suggest that his writings were interrupted given the curtailed ending. The 7½ x 6¼ inch book is missing the spine cap and rear cover the front leather cover still attached. Someone has used modern clear tape to strengthen the inside front hinge. Overall G.; Manuscript; 8vo - over 7¾" - 9¾" tall; KEYWORDS: HISTORY OF,OLIPHANT, BRINDISI, ALEXANDRIA, ADRIATIC SEA, TRAVEL IN THE MEDITERRANEAN, EGYPT, SUEZ CANAL, NORTH AFRICA, HEEL OF ITALY, MONTENEGRO, IONIAN SEE, AUSTRIAN LLOYD COMPANY, PADDLE STEAMER, THE AMERICA, ALBANIAN WATERS, CAIRO, THOMAS COOK, 19TH CENTURY TRAVEL, CORFU, NILE RIVER VALLEY, GIZA, EGYPTIANS, MIDDLE EAST, THE LEVANT, CYPRESS, CRETE, NAUTICAL, SEA GOING, HANDWRITTEN, MANUSCRIPT, AUTOGRAPHED, AUTHORS, DOCUMENT, LETTER, AUTOGRAPH, KEEPSAKE, WRITER, HAND WRITTEN, DOCUMENTS, SIGNED, LETTERS, MANUSCRIPTS, HISTORICAL, HOLOGRAPH, WRITERS, AUTOGRAPHS, PERSONAL, MEMOIR, MEMORIAL, PERSONAL HISTORY, ARCHIVE, DIARY, DIARIES, JOURNAL, LOG, PRIMARY SOURCE, FIRST HAND ACCOUNT, SOCIAL HISTORY, PERSONAL STORIES, LIVING HISTORY, ANTIQUITÉ, CONTRAT, VÉLIN, DOCUMENT, MANUSCRIT, PAPIER ANTIKE, BRIEF, PERGAMENT, DOKUMENT, MANUSKRIPT, PAPIER OGGETTO D'ANTIQUARIATO, ATTO, VELINA, DOCUMENTO, MANOSCRITTO, CARTA ANTIGÜEDAD, HECHO, VITELA, DOCUMENTO, MANUSCRITO, PAPEL,BIOGRAPHY BIOGRAPHICAL AUTOBIOGRAPHICAL AUTOBIOGRAPHY PERSONAL NARRATIVES

Publisher: ABOARD THE PADDLE BOAT STEA,MER THE AMERICA, 1875

1875 ORIGINAL MANUSCRIPT TRAVEL DIARY HANDWRITTEN BY A KEEN EYED ERUDITE ENGLISHMAN WHOSE TRIP FROM BRINDISI TO ALEXANDRIA IS THWARTED BY THE TRAVEL GENIUS MR. THOMAS COOK