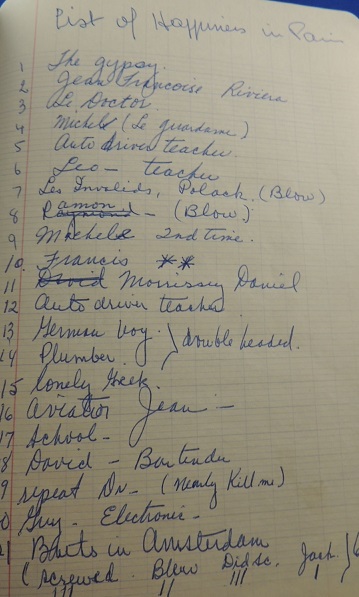 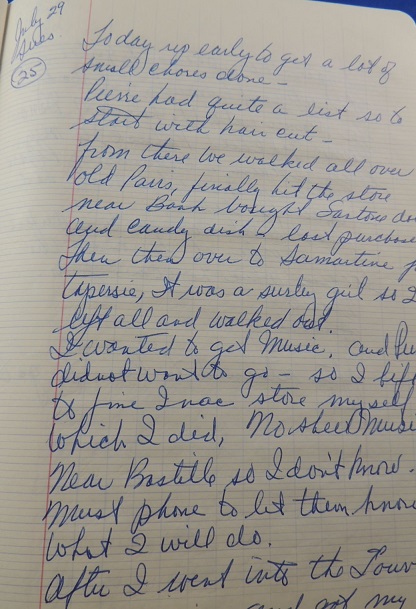 1969 ORIGINAL MANUSCRIPT TRAVEL DIARY HANDWRITTEN BY ONE OF SAN FRANCISCO'S MOST FAMOUS POLITICIANS, RESTAURANTEURS, PHILANTHROPISTS AND DRAG QUEENS KNOWN AS THE GRAND MERE AND THE ABSOLUTE EMPRESS I OF SAN FRANCISCO

On offer is a sensational and in many ways unusual travel memoir handwritten by the famous and some would say notorious José Julio Sarria a ground breaking homosexual politician, restaurateur, philanthropist, drag queen and senior member of the San Francisco gay social elite who details a July 5th 1969 [unstated but the dates match the year] through July 31st. José Julio Sarria [while unsigned the 9 x 6½ inch notebook is undoubtedly in the hand of José Julio Sarria given the item came directly from his estate and includes detailed entries of well known people in his life] details a trip to Paris France that makes for a ribald tales of two hedonists: unabashed socializing, sexualizing and gourmet foods in his 25 or so days in Paris and some in Holland. Sarria prefaces the narrative with an index: 'List of Happiness in Paris' which in fact is a breakdown of his 20 or so sexual liaisons with a breakdown of some sexual acts included. A more modest chart is part of his Dutch data. He holds nothing back in this travel memoir of the many, multiple, casual and formal occasions they have sex though sometimes he or Pierre merely talk about making a date and then 'a good time was had by all'. Along with the sexual adventures is an interesting narrative on the travel aspects: rather than typical tourist entries Sarria and Pierre go from one group of friends and acquaintances or family to another interacting with them and also the characters they meet on the way, a gypsy Ramon who Jose services several times, waiters, teachers etc., etc. There is much discussion of the food. All told there are 70+ pages plus a few addresses and financials in the back in Jose's bold style. Overall VG. Wikipedia: José Julio Sarria also known as The Grand Mere, Absolute Empress I de San Francisco, and the Widow Norton (December 12, 1922 or 1923 - August 19, 2013) was an American political activist from San Francisco, California who, in 1961, became the first openly gay candidate for public office in the United States. He is also remembered for performing as a drag queen at the Black Cat Bar and as the founder of the Imperial Court System. Following the closure of the Black Cat in 1964, Sarria went to work with restaurateur Pierre Parker. The pair operated French restaurants at World's Fairs. While at the 1964 New York World's Fair, Sarria learned that Jimmy Moore had committed suicide. Sarria worked at several more Fairs before retiring in 1974. After living with Parker in Phoenix, Arizona for several years, Sarria returned to San Francisco. He continued to reign over the Courts for 43 years, before abdicating in 2007. For his lifetime of activism, the city of San Francisco renamed a section of 16th Street in Sarria's honor. Also: The International Imperial Court System (IICS) also known as the International Court System is one of the oldest and largest LGBT organizations in the world.; Manuscript; 8vo - over 7¾" - 9¾" tall; KEYWORDS: HISTORY OF,JOSE JULIO SARRIA, PIERRE PARKER, PARIS, FRANCE, TRAVEL, ARTISTS, ARTISTS ABROAD, AMERICANA, THE GRAND MERE, ABSOLUTE EMPRESS I DE SAN FRANCISCO, THE WIDOW NORTON, SAN FRANCISCO, CALIFORNIA, BLACK CAT BAR, IMPERIAL COURT SYSTEM, LGBT, GAY, LESBIAN, BISEXUAL, TRANSSEXUAL, HOMOSEXUAL, DRAG QUEENS, TRANSVESTITES, HOUSE OF FAIRIES, FRIENDS AND FRIVOLITY, THE ORDER OF THE FAR EAST, THE SOCIETY OF THE CROWN AND SCEPTER, LA CASA DE MILAGROS, THE HOUSE OF MIRACLES, CROSS DRESSERS, CROWN AND SCEPTRE, AMERICANA,HANDWRITTEN, MANUSCRIPT, AUTOGRAPHED, AUTHORS, DOCUMENT, LETTER, AUTOGRAPH, KEEPSAKE, WRITER, HAND WRITTEN, DOCUMENTS, SIGNED, LETTERS, MANUSCRIPTS, HISTORICAL, HOLOGRAPH, WRITERS, AUTOGRAPHS, PERSONAL, MEMOIR, MEMORIAL, PERSONAL HISTORY, ARCHIVE, DIARY, DIARIES, JOURNAL, LOG, PRIMARY SOURCE, FIRST HAND ACCOUNT, SOCIAL HISTORY, PERSONAL STORIES, LIVING HISTORY, ANTIQUITÉ, CONTRAT, VÉLIN, DOCUMENT, MANUSCRIT, PAPIER ANTIKE, BRIEF, PERGAMENT, DOKUMENT, MANUSKRIPT, PAPIER OGGETTO D'ANTIQUARIATO, ATTO, VELINA, DOCUMENTO, MANOSCRITTO, CARTA ANTIGÜEDAD, HECHO, VITELA, DOCUMENTO, MANUSCRITO, PAPEL,BIOGRAPHY BIOGRAPHICAL AUTOBIOGRAPHICAL AUTOBIOGRAPHY PERSONAL NARRATIVES

Title: 1969 ORIGINAL MANUSCRIPT TRAVEL DIARY HANDWRITTEN BY ONE OF SAN FRANCISCO'S MOST FAMOUS POLITICIANS, RESTAURANTEURS, PHILANTHROPISTS AND DRAG QUEENS KNOWN AS THE GRAND MERE AND THE ABSOLUTE EMPRESS I OF SAN FRANCISCO

1969 ORIGINAL MANUSCRIPT TRAVEL DIARY HANDWRITTEN BY ONE OF SAN FRANCISCO'S MOST FAMOUS POLITICIANS, RESTAURANTEURS, PHILANTHROPISTS AND DRAG QUEENS KNOWN AS THE GRAND MERE AND THE ABSOLUTE EMPRESS I OF SAN FRANCISCO