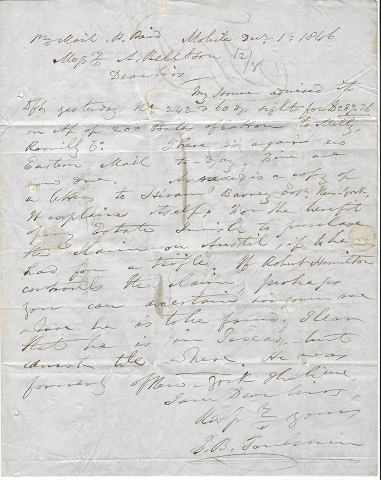 By: JOHN B. TOULMIN

On offer is a super, original, significant 1846 autographed pair [2] of manuscript stampless letters dated Mobile Alabama handwritten by John B. Toulmin to Abraham Bell & Son, New York City. The business letters from one of the leading cotton factors in 19th Century Mobile, Alabama exemplify the importance of the cotton trade, shows the international nature of cotton and how a receivable from New York City even in 1846 could affect claims in Mobile a commercial town filled lawyers, factors, merchants and professionals serving the cotton trade's needs. Mobile in the 1840s was the second busiest cotton port after New Orleans. It was also an important slave trade center. The primary letter from Toulmin to Bell & Son and the second is a copy of another letter involving the same topic between two lawyers. Written in haste, a bit of a challenge; here are snippets: "By Mail P. Paid Mobile Decm 1: 1846 Messrs A. Bell & Son 12/8 Dear Sirs [There is a quick introductory statement about a sight draft and 200 bales of cotton] Toulmin then says "There is again no Eastern Mail..." [A specific mail carried east by steamship?] He mentions a "copy of a letter to Hiram Barney Esq. New - York." [Another letter has been appended to this one] "It explains itself. For the benefit of my Estate I wish to Purchase the claim on Austill [Jeremiah Austill (1794-1881) was an Alabama folk hero who as a 19 year participated in the Canoe Fight with the Creeks in 1813 and was the night courier between the forts in the Creek Country. He later was a merchant, planter, county clerk and state Representative and Senator.] if it be had for a trifle [like many ante-bellum Americans Toulmin is trying to make money by buying debt] If Robert Hamilton controls the claim [likely a merchant in NYC] perhaps you can ascertain and inform me where he is to be found. I learn that he is in [?] but cannot tell where. He was formerly of New York [?] I am Dear sirs Resp lly yours J.B. Toulmin". The second letter is on the next page and listed as "Copy" "Mobile Nov 25, 1846 Hiram Barney Esq. [Hiram Barney (1811-1895) was born in Henderson, New York and graduated from Union College in 1834. He was an active lawyer in New York City for many years and an abolitionist leader. He ran for Congress on the Anti-Slavery ticket in 1840 and was a Presidential Elector for the Free Soil Party in 1848 and was a delegate to the Republican National conventions in 1856 and 1860. Barney met privately with Abraham Lincoln in Springfield after the nomination representing New York interests in Cabinet appointments. ] I presume upon the acquaintance that has arisen through our brief correspondence, [both are lawyers] to ask a professional favor. If it result in ascertaining that nothing can be done, it will give you very little trouble. If it [?] to useful results we can secure you a reasonable fee. Hamilton & Cole, [not identified] of your city, took the benefit of the general bankrupt law in New York. Jeremiah Austill, [see above] of our city owed them a large sum, I think $8000.00 or more, ------ But Messrs Hamilton & Cole previous to the assignment by the bank [?] had made an assignment, (in New York) to one Robert Hamilton, in trust for their creditors [Robert Hamilton, not known if related to Hamilton & Cole, has bought debts owed to H & C for less than face value hoping to get more monies when paid by creditors] Whether Austill's debt was then assigned, is not certain. Now will you ascertain 1.Was Austill's debt contained in the schedule in bankruptcy? -- Is it was, 2. Was it sold at the assignors sale, and who was the purchaser? If it was sold, then we wish to buy up the claim, provided it can be obtained for a small sum. [Nobody wants to pay much for the debt] It is in the way of another claim here. [Key point-- Austill's debt to H & C is blocking another claim in Mobile so people in Mobile want to get it.] If the purchaser can be found, and an offer be made here in such a [?] as not to excite in him [?] expectations such orders shall be forwarded, as shall enable you to process the assignment, and satisfy you for the trouble you may have occasion to take. I remain, Sir, very truly Yours J F Adams. [John F. Adams was a Mobile attorney]. BIO NOTES: 1. The author John Butler Toulmin (1788-1860) was an English immigrant who followed his two older brothers to America. [Harry Toulmin (1766-1823) became the 2nd Kentucky Secretary of State and later 2nd Superior Court Judge for the Tombigbee District in Mississippi, 1804-1819.] [Mathew C. Toulmin (1776-1818) died in Mobile.] John B. Toulmin suffered a number of financial reverses before succeeding as a Commission Merchant. He traveled to Britain at least 30 times and in fact died in England. [Note Bell and Toulmin maintained close relations with their home country which benefited both who dealt in an international commodity]. 2. The addressee A. Bell & Son was a company formed in 1844. Abraham Bell (1778-1856) was an Irish Quaker who immigrated to the United States c.1804 and built a large shipping and commission merchant business in New York City focusing on cotton. He maintained close ties with traders in Belfast, Dublin, Liverpool and London and was active in carrying Irish immigrants in the 1840s escaping the ravages of the potato famine. Bell business paper archives are at several repositories including SUNY-Albany; University of Michigan; Winterthur in Delaware and the New York Historical Society. Overall G+.

Title: 1846 ORIGINAL MANUSCRIPT LETTERS [2] HANDWRITTEN BY ONE OF ALABAMA'S LEADING COTTON FACTORS AND WHY COTTON WAS INDEED KING IN MOBILE