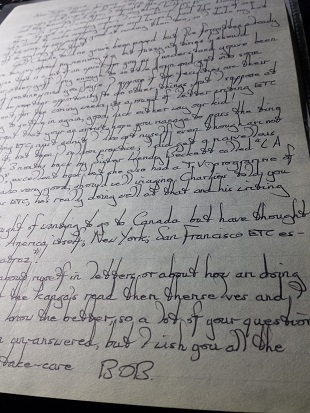 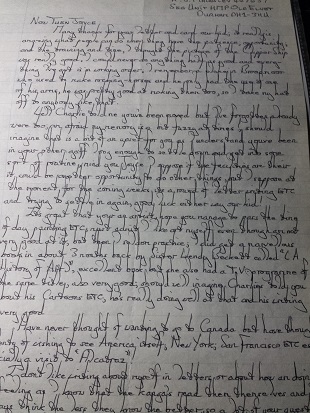 On offer is a sensational, fascinating circa 1990s handwritten letter in a curious unique cursive by Robert Maudsley one of England's most notorious killers a man of such evil intent as to be labelled the original "Hannibal the Cannibal" and whose life has been spent in specially designed prison cells made famous housing the film version of Hannibal in the movie 'Silence of the Lambs'. This 11.5 x 8.5 inch letter is besides being an almost unheard of example of Maudsley's writings it offers a perspective that researchers and historians will find remarkable: this letter was penned to a Canadian woman, Joyce Conner, who was the lover for about 15 years of another of England's most notorious prison inmates - Charles Bronson, aka Michael Peterson, aka Charles Salvador. [Bronson and Conner styled themselves as 'Princess and the Madman' and from this odd pairing Bronson produced voluminous archive of writings which we list separately: Seller ID #000854n.] The 32 line letter on a single sheet of ruled paper is a 400+ word response to Joyce's letter and begins in a manner that actually chills: "Now then Joyce" and then goes on to thank her for her letter and an attached card complimenting her on the graphics of a clipper ship and with humility offering his lack of talent in those areas and he admires anyone who has. He also refers to Bronson, they were still friends then and thus before their noted falling out that Bronson refers to in interviews. In one fascinating comment Maudsley says he never thought of going to Canada where Joyce is but he wishes he could travel the USA and especially a trip to Alcatraz! He then explains to Joyce most of her questions must go unanswered as he does not like to discuss himself too often then simply signed "BOB". Overall VG.