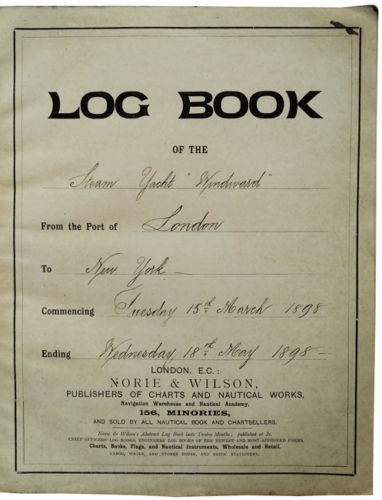 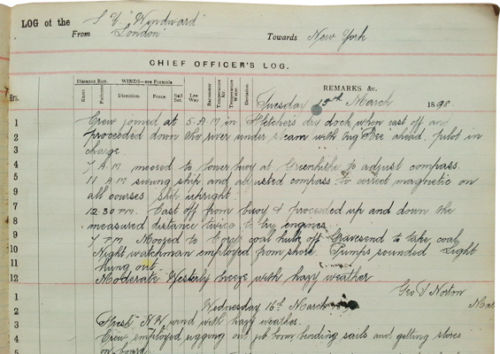 On offer is a super, original manuscript relic of Arctic exploration and humankind's unceasing attempts at discovery no matter what the adversity including the cold, vast unexplored wastelands of the North that drove men like Robert Edwin Peary to gamble with the money of their backers and the lives of the men employed to make those dreams come alive. This ship's log details the commencement of Peary's attempt to discover the North Pole in 1898 by way of the steam yacht 'Windward' which was being delivered to Peary in New York from London to be his flagship in Peary's second Arctic Expedition and voyage of discovery and one which he and 'Windward' would claim the farthest point north ever reached. Dated 'At Sea, London to New York', 15 March - 18 May 1898 the logbook details in typical 'quarterdeck' fashion meticulous records and narrative handwritten by the ship's first mate George J. Norton of Dorset who has signed each page. A list of the 20 or so crew members, their rank and from whence they came is at the start of the 55+ pages of daily log notes, for example: the crew joining at 5 am at Fletcher's dry dock in Limehouse, East London, on Tuesday, 15 March 1898, and being taken by tug on the Thames, passed Greenhithe to Gravesend, and from there rounding the bend passed Hastings and Beachy Head Norton records position, course, speed, sea and weather conditions, crew duties, repairs and maintenance, soundings, etc. From 28 April to 3 May the ship and crew navigated vicious high seas, gale winds and thunder storms. The final entry dated 18 May 1898 reads, "10 AM Tug came alongside to take crew's effects. Left ship, leaving a watchman in charge who was employed by Lieut Peary. All hands except Ramsay Nagle & DeWitt going to London by 'Majestic'." HISTORICAL NOTES: In December, 1897, while Lieutenant Peary was in London, the steam yacht 'Windward', which he had used in his Franz Joseph Land expedition, was again tendered to him by Alfred G. Harmsworth, editor of London Daily Mail and owner of the vessel. Harmsworth further offered to have the vessel re-engined and delivered to New York. Peary accepted the offer. In the spring of 1898 the Peary Arctic Club was organised for funding, and in May 'Windward' arrived in New York. A machinists' strike in England had, however, prevented the installation of new engines. After two weeks in New York the ship set sail for Australia to participate in Peary's first north polar expedition. Captain Bartlett, who made the voyage from New York to Sydney with 'Windward' would from there command Peary's old ship 'Hope.' Announced July 16, 1898 in Scientific American Magazine, "The auxiliary steam yacht 'Windward' departed from New York on 2 July 1898, for Sydney, Cape Breton, in command, Captain John Bartlett, who has made four trips to the Arctic regions. Mr. Peary and other members of his party will join the 'Windward' at Sydney. The 'Windward' carried one of the two survivors of the six Esquimaux which Mr. Peary brought home last year. The 'Windward' has 50 tons of provisions for the use of Mr. Peary and his men. From Sydney the yacht will go to Cape York, Greenland, where she will take aboard a party of 60 Esquimaux with their sledges and dogs. From there she will steam to Sherard Osborne Fiord, where a base of supplies will be established. As the expedition moves northward it will at 50 mile intervals establish other bases of supplies for use in case the party is forced to retreat. The 'Windward will return in spring to Sydney for stores." The large25 x 31 cm log book made for the trade by Norie & Wilson of London has green paper boards with some wear to boards but overall G+.; Manuscript; Folio - over 12" - 15" tall; KEYWORDS: HISTORY OF, STEAMER YACHT WINDWARD, ROBERT EDWIN PEARY, ARCTIC EXPEDITION, TRAVEL, NORTH POLE, GEORGE J. NORTON, EXPLORERS, EXPLORATION, MARINE, NAUTICAL, VOYAGERS, VOYAGE OF DISCOVERY, JESUP LAND, CAPE JESUP, GEORGE J. NORTON, SCIENTIFIC VOYAGES, AMERICANA, HANDWRITTEN, MANUSCRIPT, AUTOGRAPHED, AUTHORS, DOCUMENT, LETTER, AUTOGRAPH, KEEPSAKE, WRITER, HAND WRITTEN, DOCUMENTS, SIGNED, LETTERS, MANUSCRIPTS, HISTORICAL, HOLOGRAPH, WRITERS, AUTOGRAPHS, PERSONAL, MEMOIR, MEMORIAL, PERSONAL HISTORY, ARCHIVE, DIARY, DIARIES, JOURNAL, LOG, PRIMARY SOURCE, FIRST HAND ACCOUNT, SOCIAL HISTORY, PERSONAL STORIES, LIVING HISTORY, ANTIQUITÉ, CONTRAT, VÉLIN, DOCUMENT, MANUSCRIT, PAPIER ANTIKE, BRIEF, PERGAMENT, DOKUMENT, MANUSKRIPT, PAPIER OGGETTO D'ANTIQUARIATO, ATTO, VELINA, DOCUMENTO, MANOSCRITTO, CARTA ANTIGÜEDAD, HECHO, VITELA, DOCUMENTO, MANUSCRITO, PAPEL,BIOGRAPHY BIOGRAPHICAL AUTOBIOGRAPHICAL AUTOBIOGRAPHY PERSONAL NARRATIVES

Title: 1898 ORIGINAL MANUSCRIPT SHIP'S LOG BOOK OF THE FAMED STEAM YACHT WINDWARD AS IT CROSSED FROM LONDON TO NEW YORK TO MEET IT'S FUTURE AND DESTINY WITH ROBERT EDWIN PEARY