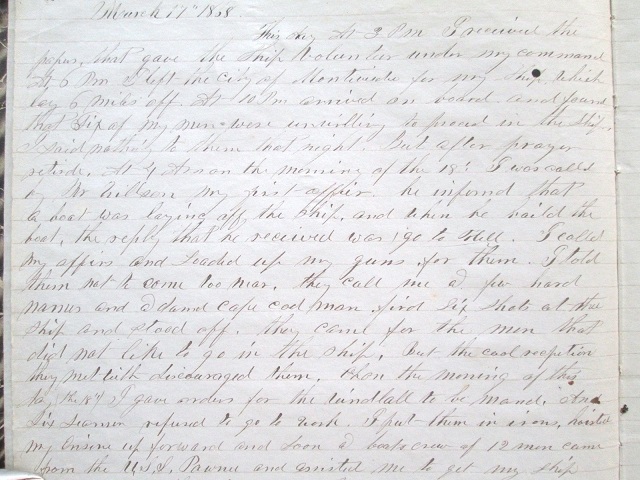 On offer is a sensational, original post Civil War era 1868 - 1872 Captain's log book and journal handwritten by Massachusetts mariner George Sylvester Chase (1833-1877). Born and raised in the Cape Cod town of Yarmouth, later to New Bedford his registration for the 1863 Civil War draft listed his occupation as a "mariner at sea whaling" with the 1870 census shows him "at sea" and living in New Bedford. Their family was well noted in Deyo's History of Barnstable County as his father was the noted Cape Cod Baptist minister Enoch E. Chase (1804-1887). Captain Chase at age 35 would have been considered an old salt by anyone's opinion who holds naval and maritime history in high regard and those reading this log would not be disappointed. There are shades of Forester and Conrad on nearly every page. His various ships included the "Volunteer", "Ericsson", and "Regent" and immediately from the first pages we encounter high drama on the seas: "my first officer...informed [me] that a boat was laying off the ship and when he hailed the boat, the reply he received was go to hell...I told them not to come too near. They call me a few hard names and a damned Cape Cod man and fired six shots at the ship..." Given this is during post war peace it comes as an eye opening entry. The 12.5" x 8.5" folio has 100 pages or so and besides Chase's trials and travails at sea he always has his heart in New Bedford often entries in the manner of a diary addressed to his wife "Carrie" whom he greatly misses. At one point, he expresses hope she will join him on the next voyage so that he might reap the benefits of her "superior mind" while at sea. Other entries include the description of a fight aboard ship involving a crew member who drew a knife while threatening to kill everyone in sight, a crew member who fell overboard in "very heavy seas...and it would have been impossible to have lowered a boat", etc. Entries adding much depth to this book include heartfelt verse, much addressed to his wife or a cousin, sometimes for himself as creative outlet on long sea voyages. A fair bit of the son of a Baptist preacher peeks out from the page throughout his writings. And of course as with any ship's book he records the typical data any sailor would note such as position, weather and any and all nautical observations. The book has some cover wear and some pages are loose but all accounted for and legible. Overall G.; Manuscript; Folio - over 12" - 15" tall; KEYWORDS: HISTORY OF, GEORGE SYLVESTER CHASE, CAPE COD, SEA CAPTAIN, MARITIME, MERCHANT MARINER, COMMERCE BY SEA, OCEAN GOING COMMERCE, NAVAL, NAUTICAL, SEA FARING, SAILORS, WHALERS, WHALING, NEW BEDFORD, YARMOUTH, SALEM, BARNSTABLE COUNTY, MASSACHUSETTS, SHIPS VOLUNTEER, ERICSSON, REGENT, ENOCH E. CHASE, AMERICANA, HANDWRITTEN, MANUSCRIPT, AUTOGRAPHED, AUTHORS, DOCUMENT, LETTER, AUTOGRAPH, KEEPSAKE, WRITER, HAND WRITTEN, DOCUMENTS, SIGNED, LETTERS, MANUSCRIPTS, HISTORICAL, HOLOGRAPH, WRITERS, AUTOGRAPHS, PERSONAL, MEMOIR, MEMORIAL, PERSONAL HISTORY, ARCHIVE, DIARY, DIARIES, JOURNAL, LOG, PRIMARY SOURCE, FIRST HAND ACCOUNT, SOCIAL HISTORY, PERSONAL STORIES, LIVING HISTORY, ANTIQUITÉ, CONTRAT, VÉLIN, DOCUMENT, MANUSCRIT, PAPIER ANTIKE, BRIEF, PERGAMENT, DOKUMENT, MANUSKRIPT, PAPIER OGGETTO D'ANTIQUARIATO, ATTO, VELINA, DOCUMENTO, MANOSCRITTO, CARTA ANTIGÜEDAD, HECHO, VITELA, DOCUMENTO, MANUSCRITO, PAPEL,BIOGRAPHY BIOGRAPHICAL AUTOBIOGRAPHICAL AUTOBIOGRAPHY PERSONAL NARRATIVES

Title: 1868 - 1872 ORIGINAL SHIP'S LOG AND CAPTAIN'S DIARY WHO LIVES A ROLLICKING SEA FARING LIFE BUT PINES FOR HIS CARRIE