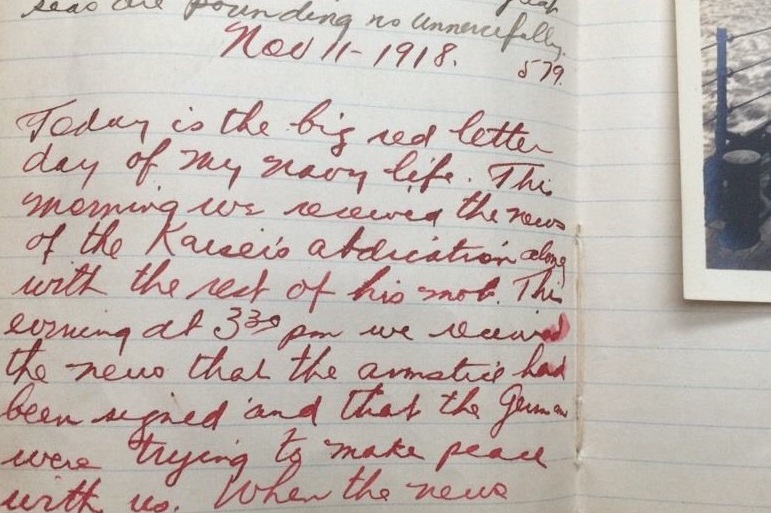 On offer is a super, original 1918 World War I manuscript diary handwritten by United States Navy sailor Robert C. Savage N.N.V. [National Naval Volunteer] as inscribed on the cover of the USS South Dakota ACR-9. Robert does a super job as a diarist having added great depth to his memoir by tucking in 100+ real photographs of ships, ship life and the many Ports of Call plus adding further depth are a number of tipped in ephemeral pieces that go right to the heart of this sailor's soul. While this diary does an excellent job of giving a deck hand's perspective of life and service aboard the South Dakota Robert shows an enthusiasm for the ship and his service not always seen among the 'lower' decks; the journal begins we believe on the 437th day of his service in the Navy as he runs a dual number system on the pages of the lined book he has used. Along with the many, many dozens of original photos he has tipped in; some of his family back home as a reminder but many more of his mates, ship and other ships and more there are two official 1917 performance reports tipped in with his own comments on the distance covered; a super, typed four paragraph sheet tipped in titled 'Why didn't you wait to be drafted?' which addresses the question of volunteerism versus those conscripted and there is some obvious disdain for the draftees; handwritten lists of ships in convoys, colliers, submarine torpedo boats detailing the 6 trips the South Dakota makes from June 23, 1918 leaving New York until November 18, 1918 but there iss a heading for Nov 19 1918 Day 585 but the space is left blank and the rest of the book is photos or data. Likely Robert stopped telling the story of his service upon the news the war was over.Here is his final entry which reveals the man: 'Still out on the range tonight we had night firing with the searchlight playing on the target the shells fired had the tracers on them and it sure was a pretty sight to see them tearing their way thru the air light a ball of fire No news about when we will leave the old SD yet.' Overall G+.; Manuscript; 12mo - over 6¾" - 7¾" tall; KEYWORDS: HISTORY OF, ROBERT C SAVAGE, USS SOUTH DAKOTA, ACR-9, WWI, US NAVY, UNITED STATES NAVY, WORLD WAR I, WW1, WWI, WORLD WAR ONE, THE GREAT WAR, THE WAR TO END ALL WARS, ARMISTICE OF COMPIÈGNE, NATIONAL NAVAL VOLUNTEER, CONVOY DUTY, NORTH ATLANTIC, SUBMARINE CHASERS, USN, NAVAL, MARINES, MARINERS, SAILORS, DECK LIFE, LOWER DECKS, NAUTICAL, WAR IN THE NORTH ATLANTIC, AMERICANA, HANDWRITTEN, MANUSCRIPT, AUTOGRAPHED, AUTHORS, DOCUMENT, LETTER, AUTOGRAPH, KEEPSAKE, WRITER, HAND WRITTEN, DOCUMENTS, SIGNED, LETTERS, MANUSCRIPTS, HISTORICAL, HOLOGRAPH, WRITERS, AUTOGRAPHS, PERSONAL, MEMOIR, MEMORIAL, PERSONAL HISTORY, ARCHIVE, DIARY, DIARIES, JOURNAL, LOG, PRIMARY SOURCE, FIRST HAND ACCOUNT, SOCIAL HISTORY, PERSONAL STORIES, LIVING HISTORY, ANTIQUITÉ, CONTRAT, VÉLIN, DOCUMENT, MANUSCRIT, PAPIER ANTIKE, BRIEF, PERGAMENT, DOKUMENT, MANUSKRIPT, PAPIER OGGETTO D'ANTIQUARIATO, ATTO, VELINA, DOCUMENTO, MANOSCRITTO, CARTA ANTIGÜEDAD, HECHO, VITELA, DOCUMENTO, MANUSCRITO, PAPEL,BIOGRAPHY BIOGRAPHICAL AUTOBIOGRAPHICAL AUTOBIOGRAPHY PERSONAL NARRATIVES