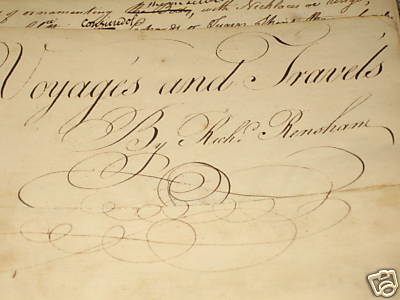 On offer is the original handwritten manuscript "Voyages and Travels of Richard Renshaw" of the British Army's heralded Royal Regiment of Artillery, Renshaw of the 4th Battalion. Some parts of this manuscript were later published as 'VOYAGE TO THE CAPE OF GOOD HOPE' in 1804. Renshaw retells in detail and with a keen observer's eye the story of his service for Great Britain. He is an educated man who writes insightful and sometimes rollicking accounts of his and the group's adventures. He describes everything he sees through Africa and into Egypt as part of Admiral Nelson's fleet and the ill-fated, elderly Scot, Lieutenant-General Sir Ralph Abercromby being part of "war reserved for the British nation to annihilate their [Napoleon and the French] ambitious designs their fleet was attacked, defeated and destroyed in Aboukir…" An absolutely incredible first hand account of this robust man's life. Whether dodging buffaloes, doing a bit of amateur archaeology [grave robbing!] in Egypt and he does not hesitate to tell all in this very beaten up and we believe incomplete journal. We also suggest that Richard is writing the diary after the fact as he writes of the near past with near total recall and then seems to catch up to himself in around 1801. Here are snippets from the preface and other short quotes: "Voyages and Travels of Richard Renshaw, Preface. As the following voyages and travels are now made public I think it is proper to lay before the reader a short acct of my life previous to my leaving England. I was born in ManC[hester] in the County of Lancaster and chiefly educated there. My parents in the early part of my life were in affluent circumstances but in consequence of misfortunes in trade in he order of Divine providence they were visited with the bitter cup of adversity my mother being _____ of delicate feelings…. Her constitution was not …and terminated in her death. My Father knowing I had a natural inclination for the army…taking frequent opportunities to lay before me the shocking numbers in the papers of those slain in previous engagements…. I left my fathers house November 1795. I never had the happiness of seeing him after…. Without seriously weighing the circumstance of so important a nature I enlisted in the 4th Battalion of the Royal Regiment of Artillery, the consequence of this step was in the following pages will inform the reader. I embarked aboard the Crescent Frigate at Spithead on the 28th of February 1796 & sailed in company with the Sceptre sixty four and some few transports the 1st of March the wind being tolerable fair…During my time in Africa we trained a Regiment of Hottentots…I was attacked by a buffalo but owing to a small lake…I escaped from him….On the 17th of August we disembarked the Island of Rhoda and joined Major General Baird…On the 12th of December 1801 we marched on Alexandria…. During my stay in Alexandria the plague was raging in an astonishing manner…" Renshaw has made numerous deletions and corrections to the narrative manuscript for future publication. NOTE: Curiously there is one handwritten note, upside down on a blank page titled "Cure for Love" which informs in a rather shaky, aged hand a sad, unhappy verse. The covers are detached but present, the text block in pieces though the narrative is complete from beginning but there are most likely a page or two missing from the end given the way it stops. There is no loss given the narrative begins in 1796 and continues through 1802 over 150 pp or so. The author wrote on the recto pages and saved the verso for later notes, clarifications etc. of which there are many. Truly a one of a kind historical diary of an important period of British Empire's glory.; English; 8vo - over 7¾" - 9¾" tall; KEYWORDS: HISTORY OF, Cape Town, South Africa, Aboukir Bay, Battle of the Nile, 4th Battalion of the Royal Regiment of Artillery, MILITARY, MILITARIA, BRITISH ARMY, NAVY, NAVAL, SCOTLAND, IRELAND, AFRICA, EGYPT, NAPOLEONIC WARS, NAPOLEON, ADMIRAL NELSON, ABERCROMBY, ABERCROMBIE, MANUSCRIPT, DOCUMENT, LETTER, AUTOGRAPH, DIARY, JOURNAL, LOG, KEEPSAKE, WRITER, HAND WRITTEN, DOCUMENTS, SIGNED, LETTERS, MANUSCRIPTS, HISTORICAL, HOLOGRAPH, WRITERS, DIARIES, JOURNALS, LOGS, AUTOGRAPHS, PERSONAL, MEMOIR, MEMORIAL, PERSONAL HISTORY, antiquité, contrat, vélin, document, manuscrit, papier Antike, Brief, Pergament, Dokument, Manuskript, Papier oggetto d'antiquariato, atto, velina, documento, manoscritto, carta antigüedad, hecho, vitela, documento, manuscrito, Papel,

Title: 1796 - 1801 HANDWRITTEN MANUSCRIPT DIARY OF THE NOTED BRITISH 4th BATTALION ROYAL REGIMENT OF ARTILLERY - OF WHICH PARTS WERE LATER PUBLISHED AS 'VOYAGE TO THE CAPE OF GOOD HOPE'