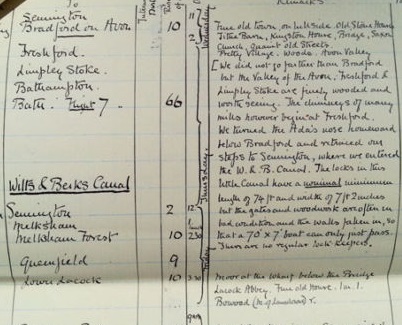 On offer is a super, original manuscript relic of travel through England on its inland waterways and canals as handwritten by the intrepid author "Rutland Bleign" [but really unidentified as it seems a pseudonym] who is travelling with his friend and illustrator, the brace working to publish the as titled book: "In Tow: The Chronicle of a Cruise in a Monkey Boat." Written from August 6th through the 28th in 1890 [he leaves off the year but some sleuthing concluded definitely the year as stated] the manuscript which appears unpublished details the three week cruise on the historic canals of Southern England at the perfect time for historians and researchers of canal travel as in 1890 while some were in peak years of usage while others beginning to see the inevitable decline due to increased railway service. Rutland is an erudite, witty raconteur in this travel account. Here are some snippets: "... after a ramble round the town, I took our permit to the Canal Office to be initialled in due form, and had a chat with the agent Mr. White... returning to our boat... I found a very serious gentleman with a pencil and notebook in hand... announced himself as the Canal-Boat-Inspector-for-the-Newbury-District-under-the- Local-Government-Board... he wanted to know how much women, children, and other livestock were onboard... if any of us were subject to hydrophobia, Asiatic cholera, smallpox or other little ailments of that sort... the blue books had already told me; but then as its owners the G.W.R. [Great Western Railway] get the traffic which it would otherwise take, it seems to be merely a transference from one pocket to the other. No doubt the Railway people would close the Cut tomorrow if their powers allowed them, which fortunately for us easy-going folk who infinitely prefer their water- to their iron-way, is not the case..." "The canal closing Sunday rule is absolutely stringent, it appears, and even a party of G.W.R. officials [Great Western Railway] who came down the canal for a weekend 'trip' were not allowed to infringe it. As the pleasure traffic begins to feel its way along these hitherto almost unknown waters, this regulation will naturally become more & more irksome, and will probably be relaxed eventually..." "....Melksham... the sunny old Quaker town... the grand old Quaker enterprise and grit which made the place, had largely disappeared, but Sir Robert Fowler still is there, and the methodist connextion is evidently strong..." "... beyond a square orchard with some lumps in the turf... Stanley Abbey... our host insisted on our partaking in some home brewed wine (vintage '86, Chateau Rhubarb Beds) of subtle flavour and half inclined to be sparkling." "We begin to expect great things of 'New Swindon,' and may, after all, have to spend more than the inevitable 'ten minutes for refreshment' which begins and ends most peoples acquaintance with the place; and which must have brought a fortune to the far seeing contractor who stipulated for that stopping clause in his lease with the Railway Company." Overall G+.; Manuscript; 8vo - over 7¾" - 9¾" tall; KEYWORDS: HISTORY OF, RUTLAND BLEIGN, 19TH CENTURY, ENGLAND, CANALS, CANAL CRUISES, ENGLISH WATERWAYS, TRAVEL BY CANALS, MONKEY BOATS, THE DECLINE OF TRAVEL BY INLAND WATERWAYS, DAWN OF RAILWAY ERA, BRITTANICA, RAILROADIANA, RAILWAYS, TUGS, RAILROADING,HANDWRITTEN, MANUSCRIPT, AUTOGRAPHED, AUTHORS, DOCUMENT, LETTER, AUTOGRAPH, KEEPSAKE, WRITER, HAND WRITTEN, DOCUMENTS, SIGNED, LETTERS, MANUSCRIPTS, HISTORICAL, HOLOGRAPH, WRITERS, AUTOGRAPHS, PERSONAL, MEMOIR, MEMORIAL, PERSONAL HISTORY, ARCHIVE, DIARY, DIARIES, JOURNAL, LOG, PRIMARY SOURCE, FIRST HAND ACCOUNT, SOCIAL HISTORY, PERSONAL STORIES, LIVING HISTORY, ANTIQUITÉ, CONTRAT, VÉLIN, DOCUMENT, MANUSCRIT, PAPIER ANTIKE, BRIEF, PERGAMENT, DOKUMENT, MANUSKRIPT, PAPIER OGGETTO D'ANTIQUARIATO, ATTO, VELINA, DOCUMENTO, MANOSCRITTO, CARTA ANTIGÜEDAD, HECHO, VITELA, DOCUMENTO, MANUSCRITO, PAPEL,BIOGRAPHY BIOGRAPHICAL AUTOBIOGRAPHICAL AUTOBIOGRAPHY PERSONAL NARRATIVES