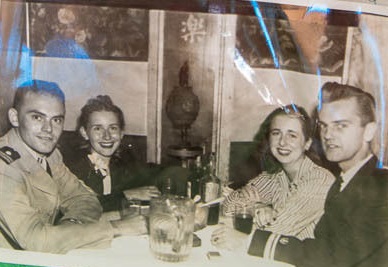 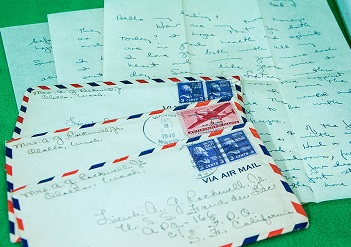 On offer is a super, large group of 375+ World War II manuscript letters between husband Lieutenant A. George Rockwell Jr. and wife Lara while he was serving aboard the USS Fond Du Lac (APA-166) a Haskell-class attack transport tasked with transporting troops to and from combat areas based out of San Francisco and she in Olalla Washington. Unusual to have both sides of correspondence from the WWII era but those that survive typically are loving [we note that the young couple have had a child around December of 1944] and this group is true to form. Dated 1943 through 1946 the correspondents do everything possible to maintain the loving connection and put the other person within their lives though from far away. George as he calls himself is a Medical Officer complains of the censors 'breathing down their necks' looking over their shoulders making it difficult to write though he does a swell job of it describing his life though not saying where he is. He also frets that as the ship spends much time in San Francisco in between trips to the Pacific Theater which of course is never quite spelled out but easily deduced he is bored with little to do. We note that the USS Fond Du Lac was commissioned in 1944 and decommissioned in 1946 making George a member of the ship for the entirety of its commission. There are a small number of ephemeral items including a photo of two couple but it has some water damage. Otherwise the letters are overall VG.; Manuscript; 8vo - over 7¾" - 9¾" tall; KEYWORDS: HISTORY OF, LIEUTENANT A. GEORGE ROCKWELL JR, USS FOND DU LAC, SAN FRANCISCO, CALIFORNIA, USN, UNITED STATES NAVY, MARINE, NAUTICAL, OLALLA WASHINGTON, WORLD WAR II, WWII, WW2, WORLD WAR TWO, WORLD WAR 2, SOUTH PACIFIC, WAR AGAINST JAPAN, AMERICANA, HANDWRITTEN, MANUSCRIPT, AUTOGRAPHED, AUTHORS, DOCUMENT, LETTER, AUTOGRAPH, KEEPSAKE, WRITER, HAND WRITTEN, DOCUMENTS, SIGNED, LETTERS, MANUSCRIPTS, HISTORICAL, HOLOGRAPH, WRITERS, AUTOGRAPHS, PERSONAL, MEMOIR, MEMORIAL, PERSONAL HISTORY, ARCHIVE, DIARY, DIARIES, JOURNAL, LOG, PRIMARY SOURCE, FIRST HAND ACCOUNT, SOCIAL HISTORY, PERSONAL STORIES, LIVING HISTORY, ANTIQUITÉ, CONTRAT, VÉLIN, DOCUMENT, MANUSCRIT, PAPIER ANTIKE, BRIEF, PERGAMENT, DOKUMENT, MANUSKRIPT, PAPIER OGGETTO D'ANTIQUARIATO, ATTO, VELINA, DOCUMENTO, MANOSCRITTO, CARTA ANTIGÜEDAD, HECHO, VITELA, DOCUMENTO, MANUSCRITO, PAPEL,BIOGRAPHY BIOGRAPHICAL AUTOBIOGRAPHICAL AUTOBIOGRAPHY PERSONAL NARRATIVES

Title: 1943 - 1946 ORIGINAL GROUP OF 375+ MANUSCRIPT LETTERS BETWEEN A YOUNG MEDICAL OFFICER SERVING ABOARD THE USS FOND DU LAC AND HIS WIFE IN OLALLA WASHINGTON