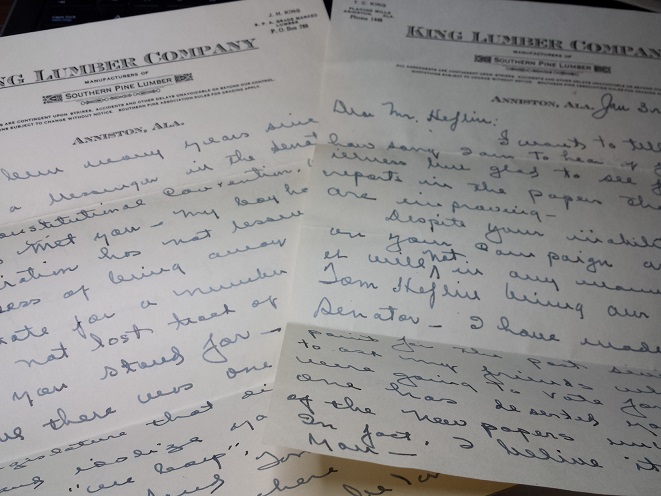 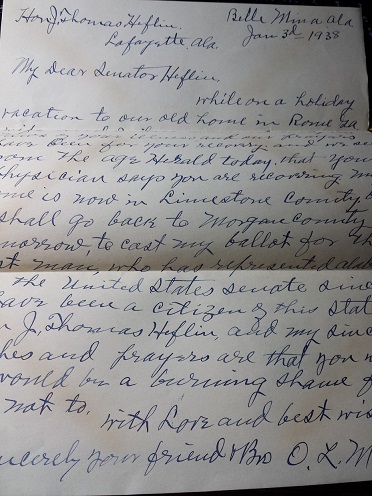 On offer is a super archive of approximately 95 original, manuscript letters and ephemera sent to or belonging to the 'colorful', beloved and in some circles despised Alabama Legislator Senator James Thomas 'Cotton Tom' Heflin. There is little argument that the State of Alabama probably has not had a more colorful or controversial U.S. senator than J. Thomas Heflin, or as he was more commonly called, "Cotton Tom" Heflin. He is known as the "Father of Mother's Day," having written and achieved passage of the national holiday. But he is also notable as one of the era's most vehement supporters of convict leasing and white supremacy, having helped draft the language in the 1901 Constitution that essentially barred African American Alabamians from voting. This group of letters offers a fascinating insight into the power and politics of the day and the persona of this man as all the incoming letters mostly from 1932 while in the Senate to 1937 and 1938 when he suffered from illness and suffered a lost election are, whether from friends, family, business and political associates in state or out of state, they almost all touch upon politics and both personal and public matters; his poor health, his election, why he is needed in congress, and letters about him losing the election and why he needs to run again - and this 7-8 years from his last term in office ended in 1931! Many of the letters entreat Alabamians to return Heflin to the Senate. Many letters are worshipful. And as colorful as Cotton Tom was so were many of his supporters and fans. Many of the letters were from people who had a brief meeting with him, or heard him speak and all weave their desires for his recovery or his running for election with those memories they so cherished of this larger than life man. Overall VG.; Manuscript; 8vo - over 7¾" - 9¾" tall; KEYWORDS: HISTORY OF, SENATOR JAMES THOMAS 'COTTON TOM' HEFLIN, LOUINA, ALABAMA, AGRICULTURE AND MECHANICAL COLLEGE OF ALABAMA, AUBURN UNIVERSITY, LAFAYETTE, ALABAMA, 1901 ALABAMA STATE CONSTITUTION, SENATORS, WHITE SUPREMACY, WHITE SUPREMACISTS, SEGREGATION, AFRICAN AMERICAN, ANTI BLACK, ANTI NEGRO, AFRICAN AMERICANA, SEGREGATIONISTS, DEEP SOUTH, DEPRESSION ERA, SOUTHERN AMERICANA, HANDWRITTEN, MANUSCRIPT, AUTOGRAPHED, AUTHORS, DOCUMENT, LETTER, AUTOGRAPH, KEEPSAKE, WRITER, HAND WRITTEN, DOCUMENTS, SIGNED, LETTERS, MANUSCRIPTS, HISTORICAL, HOLOGRAPH, WRITERS, AUTOGRAPHS, PERSONAL, MEMOIR, MEMORIAL, PERSONAL HISTORY, ARCHIVE, DIARY, DIARIES, JOURNAL, LOG, PRIMARY SOURCE, FIRST HAND ACCOUNT, SOCIAL HISTORY, PERSONAL STORIES, LIVING HISTORY, ANTIQUITÉ, CONTRAT, VÉLIN, DOCUMENT, MANUSCRIT, PAPIER ANTIKE, BRIEF, PERGAMENT, DOKUMENT, MANUSKRIPT, PAPIER OGGETTO D'ANTIQUARIATO, ATTO, VELINA, DOCUMENTO, MANOSCRITTO, CARTA ANTIGÜEDAD, HECHO, VITELA, DOCUMENTO, MANUSCRITO, PAPEL,BIOGRAPHY BIOGRAPHICAL AUTOBIOGRAPHICAL AUTOBIOGRAPHY PERSONAL NARRATIVES