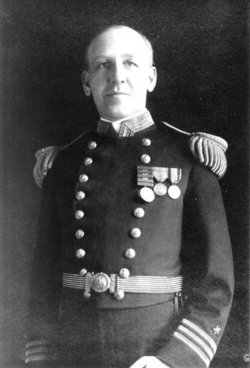 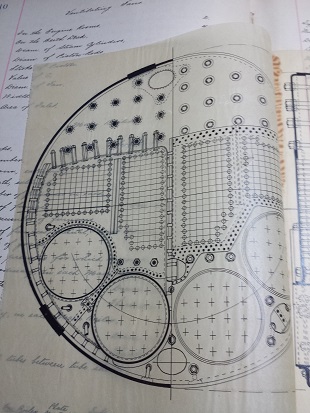 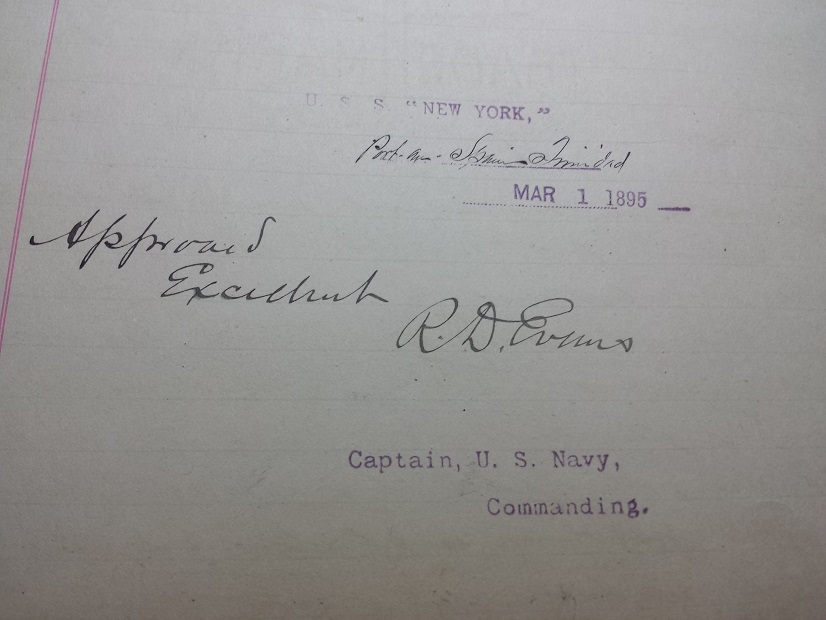 On offer is a superb, original late 19th Century manuscript journal detailing a 'shakedown' cruise of the noted USS New York under the command of Robley Dungliston 'Fighting Bob' Evans handwritten and compiled by Naval Cadet Roscoe Charles Moody. This folio book which has approximately 70 pages of entries, notes and observations regarding the running of the ship from a technical perspective. Dated December 1894 to April 1896 there are seven distinct sections and includes several ephemeral items tucked in; 15 printed forms used for checkups on the ship's engines, three pages of handwritten calculations, two oversize sheets of Standard Compass Swinging with Starboard helm and Standard Compass Swinging with post helm includes Mean Deviations and Determination of the Variation, plus 1 blue print of coastal defenses of Havana Cuba. Section 1 covers 27 pages and was examined and approved as 'Excellent' by noted Captain Robley Dungliston 'Fighting Bob' Evans, dated 7 December 1894. This report contains information on the hull, main engines, water service and fire pumps, main feed pumps, as well as other pumps, steering engines, blowers and ventilation, main boiler blower, other boilers, propellers, etc., much information about the ships systems, with diagrams of some of them, plus a longer report headed General Description of Propelling Machinery U.S.S. New York. The other six reports deal with other aspects of the ship and were dated and approved by Captain Evans, as well as Captain Winfield Scott Schley. The reports range between eight to 13 pages, and are dated 7 Jan. 1895; 1 Mar. 1895; 1 Feb. 1896; 2 Mar. 1896, W. S. Schley; and 9 April. We learn from a casual read that the U.S.S. New York was a twin screw armored cruiser and was built and equipped ready for service by the William Cramp & Sons Ship and Engine Building Company of Philadelphia, PA, the designs throughout having been furnished by the Navy Department. The contract prize was $2,985,000, and the requirement as to speed was that the vessel should maintain a speed of 20 knot for four consecutive hours with an air pressure in the fire rooms not exceeding 2½ inches of water, it having been further stipulated that a premium of $50,000 should be paid to the contractors for every quarter knot made in excess of this requirement, and that a penalty of $50,000 should be extracted from them for every quarter knot deficiency. Assigned to the South Atlantic Squadron, the New York departed New York Harbor on 27 December 1893 for Rio de Janeiro, arriving at Taipu Beach in January 1894, she remained there until heading home on 23 March, via Nicaragua and the West Indies. Transferred to the North Atlantic Squadron in August, the cruiser returned to West Indian waters for winter exercises and was commended for her aid during a fire that threatened to destroy Port of Spain, Trinidad. Returning to New York, the cruiser joined the European Squadron in 1895, and steamed to Kiel, where she represented the United States at the opening of the Kiel Canal. Rejoining the North Atlantic Squadron, New York operated off Fort Monroe, Charleston, and New York through 1897. The New York departed Fort Monroe on 17 January 1898 for Key West. After the declaration of the Spanish American War in April, she steamed to Cuba and bombarded the defenses at Matanzas before joining other American ships at San Juan in May, seeking the Spanish squadron. Not finding them, they bombarded El Morro Castle at San Juan (12 May) before withdrawing. New York then became the flagship of Admiral William T. Sampson's squadron, as the American commander planned the campaign against Santiago. The Battle of Santiago de Cuba on 3 July resulted in the complete destruction of the Spanish fleet. The cruiser sailed for New York on 14 August to receive a warrior's welcome. The next year, she cruised with various State naval units to Cuba, Bermuda, Honduras, and Venezuela, and conducted summer tactic. There are 17 tipped in illustrations, plus 14 in text illustrations, illustrations are all hand drawn in ink, bound in contemporary half leather, cloth covered boards, lacks spine, boards shaken, corners and edges worn, written in ink, in a legible hand. Overall G. BIO NOTES form one online source: Captain Roscoe Charles Moody (b. 12 Mar 1873, Biddeford, Maine) was the son of Biddeford bank executive Charles A. Moody. Capt. Moody graduated from the US Naval Academy as an engineer in 1894. During World War I he commanded the USS Maine, for which he was awarded the Navy Cross. He served as head of the Dept. of Mathematics at the US Naval Academy in Annapolis. He was very active at the academy, taking part in football, being on both the winning intramural team, and the Navy football team which beat Army that year! He was also in the choir. Moody also spent time teaching at the academy. He published a book called "The Oscillations of Ships" which was used for the instruction of the cadets for years. ; Manuscript; Folio - over 12" - 15" tall; KEYWORDS: HISTORY OF, ROSCOE CHARLES MOODY, U.S.N. ENGINEER DIVISION, U.S.S. NEW YORK, NAVAL CADET, MIDSHIPMAN, USS MAINE, NAVAL, MARINE, NAUTICAL, MARINERS, SEAFARING, SAILOR, SAILING, CRUISE, SHAKEDOWN CRUISE, TRAVEL, OCEAN VOYAGE, BIDDEFORD, MAINE, US NAVAL ACADEMY, ANNAPOLIS, NAVY CROSS, ROBLEY DUNGLISTON 'FIGHTING BOB' EVANS, SPANISH AMERICAN WAR ERA, CUBA, HAVANA, AMERICANA,HANDWRITTEN, MANUSCRIPT, AUTOGRAPHED, AUTHORS, DOCUMENT, LETTER, AUTOGRAPH, KEEPSAKE, WRITER, HAND WRITTEN, DOCUMENTS, SIGNED, LETTERS, MANUSCRIPTS, HISTORICAL, HOLOGRAPH, WRITERS, AUTOGRAPHS, PERSONAL, MEMOIR, MEMORIAL, PERSONAL HISTORY, ARCHIVE, DIARY, DIARIES, JOURNAL, LOG, PRIMARY SOURCE, FIRST HAND ACCOUNT, SOCIAL HISTORY, PERSONAL STORIES, LIVING HISTORY, ANTIQUITÉ, CONTRAT, VÉLIN, DOCUMENT, MANUSCRIT, PAPIER ANTIKE, BRIEF, PERGAMENT, DOKUMENT, MANUSKRIPT, PAPIER OGGETTO D'ANTIQUARIATO, ATTO, VELINA, DOCUMENTO, MANOSCRITTO, CARTA ANTIGÜEDAD, HECHO, VITELA, DOCUMENTO, MANUSCRITO, PAPEL,BIOGRAPHY BIOGRAPHICAL AUTOBIOGRAPHICAL AUTOBIOGRAPHY PERSONAL NARRATIVES

Title: 1894 - 1896 ORIGINAL MANUSCRIPT CRUISE NOTES OF THE NOTED USS NEW YORK WHILE COMMANDED BY THE RENOWNED 'FIGHTING BOB' EVANS HANDWRITTEN BY A YOUNG NAVAL CADET WHO WOULD ONE DAY COMMAND THE USS MAINE AND BE AWARDED THE NAVY CROSS