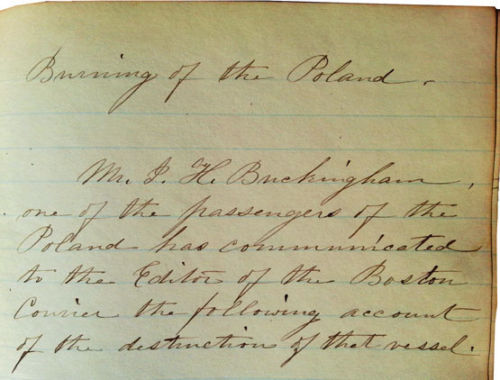 1840 RIVETING, ORIGINAL MANUSCRIPT SURVIVOR'S ACCOUNT OF THE SINKING BY FIRE AND EVENTUAL RESCUE OF AN AMERICAN PACKET SHIP FILLED WITH COMBUSTIBLES AND PASSENGERS

On offer is a sensational, original 38 page manuscript account, dated Boston, 1840 of the ill-fated voyage of the packet ship 'Poland' which caught fire on May 16 en route from New York to Le Havre in France, her passengers being rescued two days later by Captain J.B. Ingersoll with the Clifton. The narrator and survivor was Mr. J.H. Buckingham, a descendent of Thomas Tinker, one of the Pilgrim Fathers on the Mayflower, his father being Hon. Joseph Tinker Buckingham (1771-1861), politician, journalist and founder of the Boston Courier in 1824. J.H. Buckingham is also associated with the Boston Courier, for many years serving his father's enterprise as editor, publisher, and reporter. Before this voyage he had just resigned as publisher of the Boston Courier in 1939, but would return as a reporter shortly thereafter. In July 1847 he made a stage-coach trip to Chicago and throughout Illinois, as a delegate to the River and Harbor Convention and as a reporter for his father's paper, accompanying none other than (later President) Abraham Lincoln. [The actual writer appears to be Elizabeth (Elise) Russell Tyson, daughter of George Tyson, a railroad official and former merchant in the China trade and Sarah (Anthony) Tyson. She lived with her family at 314 Dartmouth Street in Boston, and in 1915 married attorney and fox hunting aficionado George D. Vaughan.] The detailed account of Poland's final voyage interrupted and ended by a lightning induced fire about 25 miles south of Nantucket Shoals leaves little to the imagination as Buckingham describes all: the beginning of the journey, the devastating storm and subsequent fire to the cotton and flour in the cargo hold, measures taken by crew and passengers for survival, the struggles and the collaborative efforts, the slowly passing and uncertain hours are recounted in detail until the final rescue. Luckily for historians and researchers the witness to these events was one of the few who remained on the vessel after most were placed on longboats. Not knowing if he would survive at all, his observations are recalled in a calm stoic manner, his recollections vivid and clear. We quote from the Sydney Gazette: "No language," says the writer of narrative. "can tell of the sufferings of that night, which was far more dreadful than the previous night." After a variety of the most agonizing apprehensions and sufferings, during which the mothers who had been compelled to hold their youngest children in their arms, were well nigh exhausted, the ship was put before the wind, in the hope of falling in with some, sail, and as the vessel leaked, the men were put to the pump, and the water first pumped up was hot. At two o'clock on the afternoon of Monday, a sail was discovered from the mast-head. It proved to be the Clifton, Captain J. B. Ingersoll, bound from Liverpool to New York, with two hundred and fifty steerage passengers. The transfer of the crew and passengers of the Poland to the Clifton was effected. At the time the last boat's load left the former, her decks had become too hot to stand upon, and as she rolled in the sea, the water ran from her reeking sides as from hot iron. On board the Clifton every attention was paid to these who had escaped such extreme danger, and in due time they were landed safely in New York." Overall G+. HISTORICAL NOTES: On 11 May 1840 she left New York with a total of 63 persons on board, 24 being cabin passengers. On the 16th she was struck by lightning, a disastrous event which resulted in a fire being sparked onboard, creating a desperate situation which, just in time, ended in a rescue. On the 18th, the Boston built 'Clifton' commanded by Captain J. B. Ingersoll, bound from Liverpool to New York with two hundred and fifty steerage passengers, came upon the Poland with her passengers sequestered to the vessel's bow. She took all persons onboard, along with any salvageable provisions, until the Captain deemed it unsafe to continue. At the time of the last load being removed, Poland's decks had become too hot to stand upon. The deeply grateful group watched the Poland burned into the sea, knowing that they had so narrowly escaped the same end. The loss of property to the Poland was estimated at $150,000. The captain, crew and all passengers were saved - within only hours of the ship's sinking. ; Manuscript; 8vo - over 7¾" - 9¾" tall; KEYWORDS: HISTORY OF, ELISE R. TYSON, BURNING OF THE POLAND, LIGHTNING STRIKE AT SEA, ATLANTIC COTTON TRADE, DISASTER, SURVIVOR ACCOUNT, AMERICAN PACKET SHIP, POLAND SHIPWRECK, BOSTON, MASSACHUSETTS, CAPTAIN J.B. INGERSOLL, SHIP CLIFTON, J.H. BUCKINGHAM, THOMAS TINKER, PILGRIM FATHERS, MAYFLOWER, HON. JOSEPH TINKER BUCKINGHAM, BOSTON COURIER, ELIZABETH (ELISE) RUSSELL TYSON, GEORGE TYSON, GEORGE D. VAUGHAN, MARINE, NAUTICAL, MERCHANT SHIP, DANGER AT SEA, ATLANTIC COTTON ROUTE, AMERICANA, HANDWRITTEN, MANUSCRIPT, AUTOGRAPHED, AUTHORS, DOCUMENT, LETTER, AUTOGRAPH, KEEPSAKE, WRITER, HAND WRITTEN, DOCUMENTS, SIGNED, LETTERS, MANUSCRIPTS, HISTORICAL, HOLOGRAPH, WRITERS, AUTOGRAPHS, PERSONAL, MEMOIR, MEMORIAL, PERSONAL HISTORY, ARCHIVE, DIARY, DIARIES, JOURNAL, LOG, PRIMARY SOURCE, FIRST HAND ACCOUNT, SOCIAL HISTORY, PERSONAL STORIES, LIVING HISTORY, ANTIQUITÉ, CONTRAT, VÉLIN, DOCUMENT, MANUSCRIT, PAPIER ANTIKE, BRIEF, PERGAMENT, DOKUMENT, MANUSKRIPT, PAPIER OGGETTO D'ANTIQUARIATO, ATTO, VELINA, DOCUMENTO, MANOSCRITTO, CARTA ANTIGÜEDAD, HECHO, VITELA, DOCUMENTO, MANUSCRITO, PAPEL,BIOGRAPHY BIOGRAPHICAL AUTOBIOGRAPHICAL AUTOBIOGRAPHY PERSONAL NARRATIVES

Title: 1840 RIVETING, ORIGINAL MANUSCRIPT SURVIVOR'S ACCOUNT OF THE SINKING BY FIRE AND EVENTUAL RESCUE OF AN AMERICAN PACKET SHIP FILLED WITH COMBUSTIBLES AND PASSENGERS

1840 RIVETING, ORIGINAL MANUSCRIPT SURVIVOR'S ACCOUNT OF THE SINKING BY FIRE AND EVENTUAL RESCUE OF AN AMERICAN PACKET SHIP FILLED WITH COMBUSTIBLES AND PASSENGERS