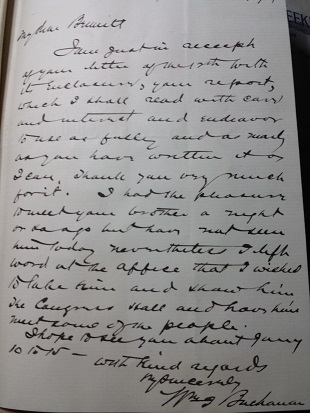 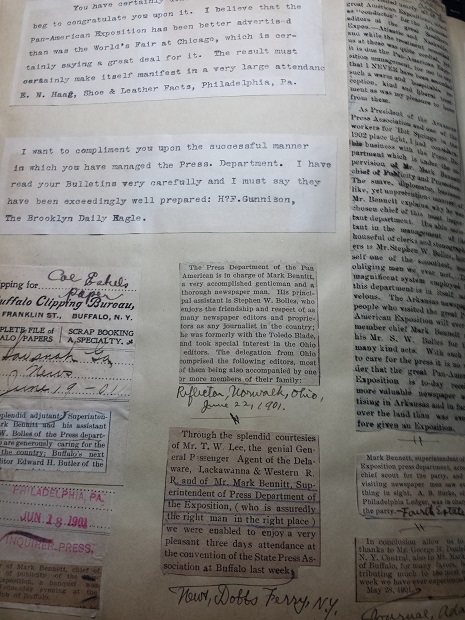 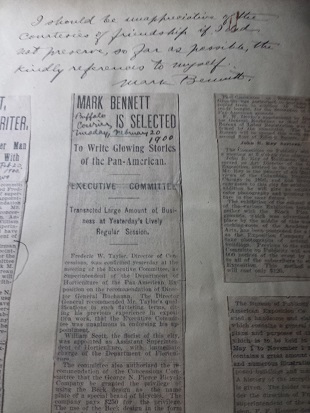 1902 - 1906 ORIGINAL SCRAPBOOK OF LETTERS, DOCUMENTS AND EPHEMERA DETAILING MUCH OF THE MACHINATIONS AND PUBLICITY OF THE MARKETING AND PROMOTION FOR THE 1901 PAN-AMERICAN AND 1904 LOUSIANA PURCHASE EXPOSITIONS COMPILED BY THE HEAD OF PUBLICITY

On offer is a sensational, original scrapbook and group of ephemera related to both the 1901 Pan-American [minor focus] and 1904 Louisiana Purchase [major focus] Expositions of the publicity superintendent and man responsible for the public faces of the Fairs being a scrapbook of his incoming correspondence including several typed and signed letters from William Buchanan the Director General of Pan-American Exposition, handwritten notes, news and magazine clippings, photos [there is a wonderful F.P. Stevens aerial photo of 1904 fairgrounds, looking east], documents and other ephemera tucked and tipped in regarding the Fairs making for an original, unique behind the scenes look. Compiled and created by Mark Bennitt (sometimes Bennett) a highly successful writer who became involved with both the 1901 Pan-American and 1904 Louisiana Purchase Expositions as the Publicity Superintendent. While the book goes a very long way in detailing the Fairs it is obviously Mr. Bennitt's personal scrapbook and it is apparent from the outset that Mr. Bennitt was a brilliant hire for those responsible for the Fairs' success as witnessed by the clippings related to his hiring and personal background as befits a man of success and proud of his ongoing accomplishments but that stated Mark was a master of his craft and the book tells the story of the machinations to making the Fairs and the man who made them publicity successes. Of particular interest will be that the book provides a mirror view of the Fairs as seen by the outside public while for the historian also providing a look at the Fairs from the inside. [We note: Near the back are some dozen pages of later writings of Bennitt's sojourn up the West coast in 1906.] The rear cover is off but present, the front holding for now, one or two pieces of ephemera have come off the pages but overall the scrapbook is G.; Manuscript; Folio - over 12" - 15" tall; KEYWORDS: HISTORY OF, MARK BENNITT, BENNETT, EARLY PUBLICIST, PUBLICITY, ADVERTISING, MARKETING, PROMOTION, 1901 PAN-AMERICAN EXPOSITION, 1904 LOUISIANA PURCHASE EXPOSITIONS, INTERNATIONAL FAIRS, WORLDS FAIRS, INTERNATIONAL EXPOSITIONS, MISSOURI, LOUISIANA, BEHIND THE SCENES, AMERICANA, HANDWRITTEN, MANUSCRIPT, AUTOGRAPHED, AUTHORS, DOCUMENT, LETTER, AUTOGRAPH, KEEPSAKE, WRITER, HAND WRITTEN, DOCUMENTS, SIGNED, LETTERS, MANUSCRIPTS, HISTORICAL, HOLOGRAPH, WRITERS, AUTOGRAPHS, PERSONAL, MEMOIR, MEMORIAL, PERSONAL HISTORY, ARCHIVE, DIARY, DIARIES, JOURNAL, LOG, PRIMARY SOURCE, FIRST HAND ACCOUNT, SOCIAL HISTORY, PERSONAL STORIES, LIVING HISTORY, ANTIQUITÉ, CONTRAT, VÉLIN, DOCUMENT, MANUSCRIT, PAPIER ANTIKE, BRIEF, PERGAMENT, DOKUMENT, MANUSKRIPT, PAPIER OGGETTO D'ANTIQUARIATO, ATTO, VELINA, DOCUMENTO, MANOSCRITTO, CARTA ANTIGÜEDAD, HECHO, VITELA, DOCUMENTO, MANUSCRITO, PAPEL,BIOGRAPHY BIOGRAPHICAL AUTOBIOGRAPHICAL AUTOBIOGRAPHY PERSONAL NARRATIVES

Title: 1902 - 1906 ORIGINAL SCRAPBOOK OF LETTERS, DOCUMENTS AND EPHEMERA DETAILING MUCH OF THE MACHINATIONS AND PUBLICITY OF THE MARKETING AND PROMOTION FOR THE 1901 PAN-AMERICAN AND 1904 LOUSIANA PURCHASE EXPOSITIONS COMPILED BY THE HEAD OF PUBLICITY

1902 - 1906 ORIGINAL SCRAPBOOK OF LETTERS, DOCUMENTS AND EPHEMERA DETAILING MUCH OF THE MACHINATIONS AND PUBLICITY OF THE MARKETING AND PROMOTION FOR THE 1901 PAN-AMERICAN AND 1904 LOUSIANA PURCHASE EXPOSITIONS COMPILED BY THE HEAD OF PUBLICITY