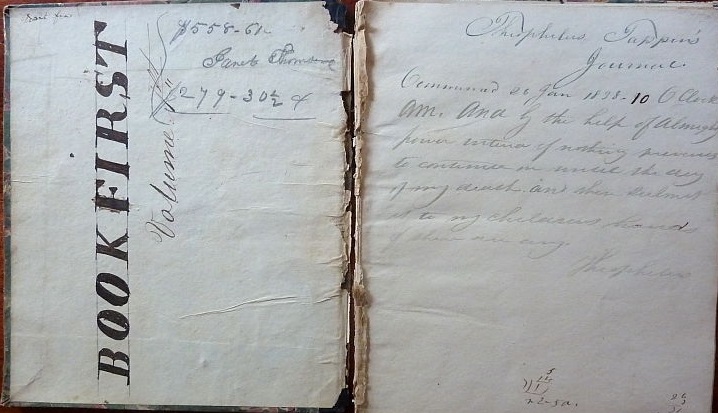 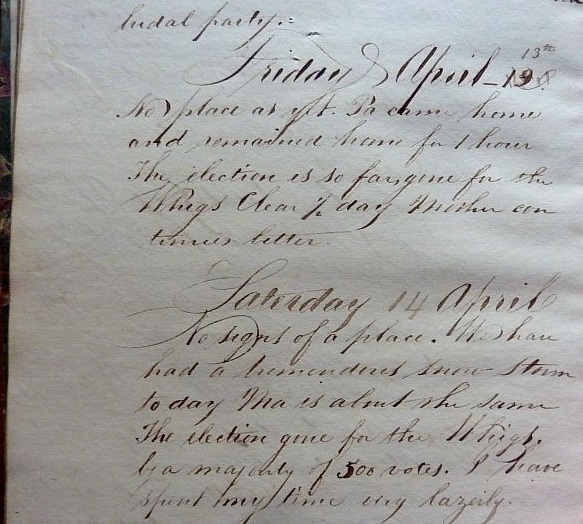 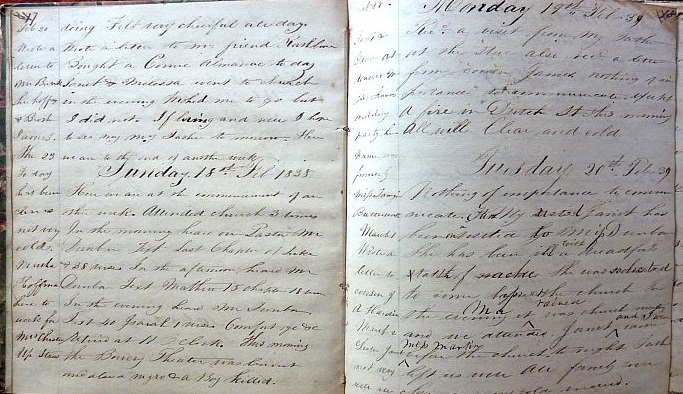 On offer is a super, original, 1838 manuscript diary handwritten by Theophilus Tappin who lived in New York City's Greenwich Village. He states: "The undersigned respectfully communicates that this is the commencement of his journal. Theophilus Tappin 26th Jan 1838 [with the final entry on May 20th 1838] 108 Waverly Place New York, I shall strive to continue it until the day of my death." Historians and researchers of 'the Village' will understand that the young [likely a teenager] Mr. Tappin's diary places him in the Village at a formative and historic time called the Empire Period. Newgate Hospital had closed a mere two years before. New York University would come in their stead. Other charitable and beneficial groups opened their doors in Greenwich Village at the time our author writes. It appears he works in a retail store. Living close to the North River and obviously attuned to what occurs on the river he writes much of what goes on. He mentions the packet ships coming to port; a fire and criminality: 'A very large fire in Avenue D between 4th and 5th streets, and an attempt to forge notes on the Kentucky Bank by a few rouges". He mentions a wind storm that blows a ship out of the bay, and leaves only one boy onboard who is rescued; riding sleighs though New York City during snow storms; ships coming into port, his first trip aboard a sailing ship; his family, the struggles of work, and his mother catching some illness. There is also mention of politics regarding the Whig party and elections. Towards the end of the diary some issues arise and Tappin remarks he is looking for a place over and over and seems to be depressed. This 7.5 x 6 inch 85 page or so diary makes for a fascinating look at the man and his times in mid 19th Century Greenwich Village and the backdrop of historic changes in the making for the area. Boards are detached and while he didn't write each day he writes paragraphs when he does write. There is an account section at the back. Overall Fair+.; Manuscript; 12mo - over 6¾" - 7¾" tall; KEYWORDS: HISTORY OF, GREENWICH VILLAGE, NEW YORK CITY, THEOPHILUS TAPPIN, EARLY 19TH CENTURY, 108 WAVERLY PLACE, WASHINGTON SQUARE PARK, NEW YORK UNIVERSITY, THE ORPHAN ASYLUM SOCIETY, OAS, RAISIN STREET, THE SOCIETY FOR THE BENEFIT OF HALF-ORPHANS AND DESTITUTE CHILDREN, SRHO, ASSOCIATION FOR THE BENEFIT OF COLORED ORPHANS, EMPIRE PERIOD, NEWGATE HOSPITAL,AMERICANA, HANDWRITTEN, MANUSCRIPT, AUTOGRAPHED, AUTHORS, DOCUMENT, LETTER, AUTOGRAPH, KEEPSAKE, WRITER, HAND WRITTEN, DOCUMENTS, SIGNED, LETTERS, MANUSCRIPTS, HISTORICAL, HOLOGRAPH, WRITERS, AUTOGRAPHS, PERSONAL, MEMOIR, MEMORIAL, PERSONAL HISTORY, ARCHIVE, DIARY, DIARIES, JOURNAL, LOG, PRIMARY SOURCE, FIRST HAND ACCOUNT, SOCIAL HISTORY, PERSONAL STORIES, LIVING HISTORY, ANTIQUITÉ, CONTRAT, VÉLIN, DOCUMENT, MANUSCRIT, PAPIER ANTIKE, BRIEF, PERGAMENT, DOKUMENT, MANUSKRIPT, PAPIER OGGETTO D'ANTIQUARIATO, ATTO, VELINA, DOCUMENTO, MANOSCRITTO, CARTA ANTIGÜEDAD, HECHO, VITELA, DOCUMENTO, MANUSCRITO, PAPEL,BIOGRAPHY BIOGRAPHICAL AUTOBIOGRAPHICAL AUTOBIOGRAPHY PERSONAL NARRATIVES