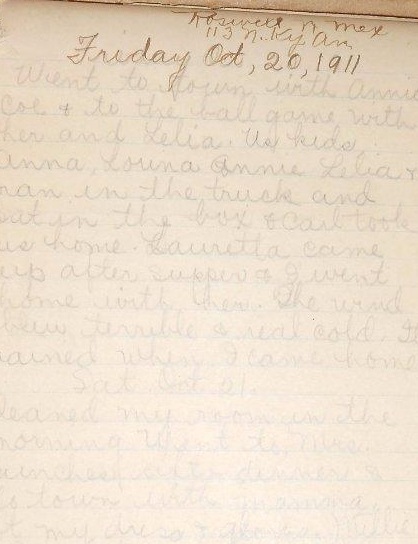 On offer are a super group of eight [8] original early 20th Century manuscript diaries handwritten by the young Marjorie Mabie who was born in 1895 and grew up in Roswell New Mexico in the early part of the century. Her family is well noted in local Roswell history having moved from Independence Iowa and once settled in Roswell they owned a number of well-known businesses. Marjorie's father at various times had a number of responsible public positions within the local community. Miss Mabie was an enthusiastic writer, the notebook style diaries are well filled [save for one about 1/3rd full], dated 1908 through 1913. Six of the diaries are all about her life in Roswell but one smallish diary is specific to a 1929 trip to California. Marjorie does a super job detailing her life and times in pre War New Mexico. Life as a student in a small town for this typical 'all American girl' is filled with school friends, activities, family and Church. Rivalries in sports between the High School and the Institute, travelling about with her gaggle of girlfriends and the simple pleasures from baseball to going to the dressmaker are detailed. Here are some snippets: "Wednesday the 25th. Ironed in the morning. The tailor shop had an explosion. Luther was burned to death. Talked to Florence and Jamie on the phone in the afternoon. Went to the library in town. Got a letter. July 1 Lilia came by before nine in the buggy and I went up to office with her. Then went and took my painting lesson. Frank was up at noon. Finished my dress in the afternoon and Mila came down and covered my buttons for me it sure looks dandy the skirt is pink and the coat is pink and white striped voile with pink cuffs and collar. Friday the 10th. Had a test in sewing. Had assembly at 11:30 and practiced yells. Bill and I went to town and got my megaphone. We went to the high school and met Lilia, and Holly we went to the football game. It was a good game, in the score was 0-0. The Institute always beat us before and we are going up. Bill Lomax broke his collarbone but no high school boys were hurt. We went to get them some candy at Nolans. We walked up north away until Milo came along in their car and took us all up there and us girls back after." Overall G+.; Manuscript; 12mo - over 6¾" - 7¾" tall; KEYWORDS: HISTORY OF, MARJORIE MABIE, ROSWELL NEW MEXICO, GIRL NEXT DOOR, WOMENS STUDIES, GENDER STUDIES, FEMINISM, PRE SUFFRAGE, BITTER LAKE, CHAVES COUNTY, SOUTHWEST, SOUTHWESTERN UNITED STATES, SMALL TOWN LIVING, TURN OF THE CENTURY, ALL AMERICAN GIRLS, GIRL NEXT DOOR, LAND OF ENCHANTMENT, SOUTHERN AMERICANA, SOUTH WESTERN AMERICAN, AMERICANA, HANDWRITTEN, HANDWRITTEN, MANUSCRIPT, AUTOGRAPHED, AUTHORS, DOCUMENT, LETTER, AUTOGRAPH, KEEPSAKE, WRITER, HAND WRITTEN, DOCUMENTS, SIGNED, LETTERS, MANUSCRIPTS, HISTORICAL, HOLOGRAPH, WRITERS, AUTOGRAPHS, PERSONAL, MEMOIR, MEMORIAL, PERSONAL HISTORY, ARCHIVE, DIARY, DIARIES, JOURNAL, LOG, PRIMARY SOURCE, FIRST HAND ACCOUNT, SOCIAL HISTORY, PERSONAL STORIES, LIVING HISTORY, ANTIQUITÉ, CONTRAT, VÉLIN, DOCUMENT, MANUSCRIT, PAPIER ANTIKE, BRIEF, PERGAMENT, DOKUMENT, MANUSKRIPT, PAPIER OGGETTO D'ANTIQUARIATO, ATTO, VELINA, DOCUMENTO, MANOSCRITTO, CARTA ANTIGÜEDAD, HECHO, VITELA, DOCUMENTO, MANUSCRITO, PAPEL,BIOGRAPHY BIOGRAPHICAL AUTOBIOGRAPHICAL AUTOBIOGRAPHY PERSONAL NARRATIVES

Title: 1908 - 1913 + 1929 GROUP OF EIGHT [8] ORIGINAL MANUSCRIPT DIARIES HANDWRITTEN BY A LOVELY SMALL TOWN GIRL OF A WELL KNOWN FAMILY LIVING IN WHAT WILL ONE DAY BECOME ONE OF THE MOST FAMOUS TOWNS ON THE PLANET