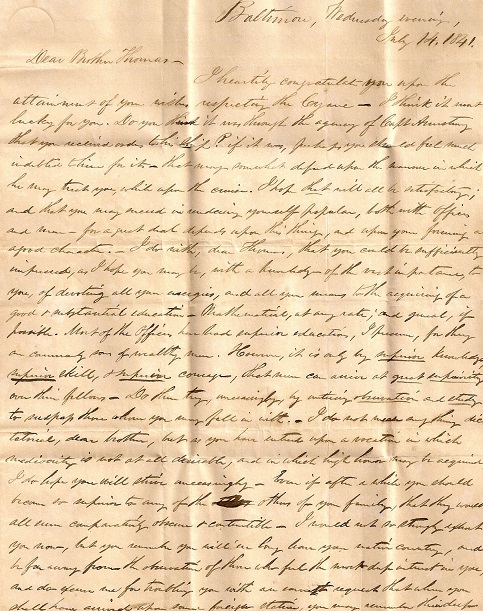 1841 ORIGINAL STAMPLESS MANUSCRIPT LETTER HANDWRITTEN BY HIS ELDER BROTHER FILLED WITH ADVICE, ADMONITIONS [AND WARNINGS AGAINST INTERCOURSE] TO A NEWLY MINTED MIDSHIPMAN ON THE SLOOP OF WAR CYANE

On offer is a super, fascinating stampless manuscript letter dated 'Baltimore Wednesday Evening, July 14, 1841 Dear Brother Thomas' [Rousy] Midshipman on U.S. Sloop Cyane handwritten by older brother William to his brother who appears to be a newly minted midshipman aboard the noted sloop of war Cyane. Beginning with congratulations the three [3] page and a bit well filled letter, written over a couple of days, brother William provides wisdom and advice as a good brother would along with admonitions of care regarding 'intercourse'. It is likely that the author William was himself a naval officer or at least a soldier within a command structure as his advice of hard work in attaining the highest levels of seafaring education are classic: 'Most of the Officers have had superior education I presume for they are commonly the sons of wealthy men. However it is only by superior knowledge, superior skills, and superior courage that men can arrive at great superiority of his fellows.' He goes on hoping Thomas will be interested in rising above mediocrity. Family news is interspersed but mostly the content deals with the ship, future travels and Thomas' role. The folded stampless letter has some splits in the folds and some very small loss where the seal opened but overall G+. HISTORICAL NOTES [online sources]: The second USS Cyane was a sloop-of-war in the United States Navy during the Mexican-American War. Cyane was launched 2 December 1837 by Boston Navy Yard. She was commissioned in May 1838, Commander John Percival in command. She sailed 24 June 1838 for duty in the Mediterranean, returning to Norfolk, Virginia 16 May 1841. She cleared 1 November 1841 for the Pacific Squadron, returning 1 October 1844. Sailing again for the Pacific 10 August 1845, Cyane served on the west coast during the Mexican War. On 7 July 1846 her commanding officer, Captain William Mervine, led a detachment of Marines and sailors from Commodore John D. Sloat's squadron ashore at Monterey, California, hoisting the American flag at the Customs House and claiming possession of the city and all of present day California. On 26 July 1846 Lieutenant Colonel John C. Frémont's California Battalion boarded Cyane, now under the command of Commander Samuel Francis Du Pont, and the ship sailed for San Diego, California on 29 July 1846. She landed Marines at nearby La Playa, where they were warmly welcomed by the largely pro-American civilian population. The Marines took abandoned guns from Fort Guijarros and used them to lay siege to Old Town San Diego. A detachment of Marines and sailors from Cyane took possession of the town, raising the American flag. They were followed shortly by the Fremont volunteers and Cyane's detachment returned aboard to sail for San Blas where a landing party destroyed a Mexican battery 2 September. Entering the Gulf of California, Cyane seized La Paz and burned the small fleet at Guaymas. Within a month, she cleared the Gulf of hostile ships, destroying or capturing 30 vessels. In company with Independence and Congress, she captured the town of Mazatlán, Mexico, 11 November 1847. On 22 January 1848, she arrived off San José del Cabo to relieve the besieged garrison there. She landed a force of about 100 men who fought the final engagement and broke the Mexican siege. She returned to Norfolk 9 October 1848 to receive the congratulations of the Secretary of the Navy for her significant contributions to American victory in Mexico. Between 9 October 1851 and 24 June 1852 Cyane sailed in the Home Squadron, rejoining it 10 October 1852 to cruise constantly on the Atlantic coast and in the Caribbean from Nova Scotia to Aspinwall for the protection of the lives and property of American citizens. She bombarded and destroyed Greytown, Mosquito Coast, 13 July 1854 in retaliation for actions against American citizens there. On June 3, 1857, the Cyane retrieved from Greytown more than 150 filibusters who surrendered with William Walker at Rivas, Nicaragua, on May 1, some of whom had their families with them. The ship afterward protected the disputed fisheries along the coast of Nova Scotia from 2 September to 30 October 1857. She sailed for Haiti 19 November 1857 and joined a special expedition surveying the Isthmus of Darien as a possible canal site. Bombardment 1854 In August 1858 Cyane stood out for the Pacific, joining the Pacific Squadron. In 1863, during the Civil War, the Cyane prevented the sloop J. M. Chapman from being used as a Confederate privateer when their boarding parties took control of the ship as it was preparing to leave San Francisco.

Title: 1841 ORIGINAL STAMPLESS MANUSCRIPT LETTER HANDWRITTEN BY HIS ELDER BROTHER FILLED WITH ADVICE, ADMONITIONS [AND WARNINGS AGAINST INTERCOURSE] TO A NEWLY MINTED MIDSHIPMAN ON THE SLOOP OF WAR CYANE

1841 ORIGINAL STAMPLESS MANUSCRIPT LETTER HANDWRITTEN BY HIS ELDER BROTHER FILLED WITH ADVICE, ADMONITIONS [AND WARNINGS AGAINST INTERCOURSE] TO A NEWLY MINTED MIDSHIPMAN ON THE SLOOP OF WAR CYANE