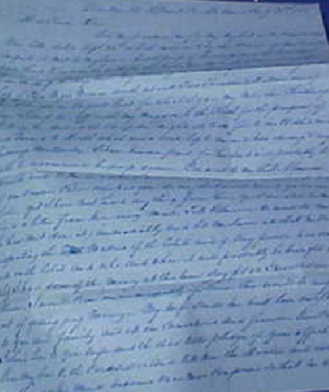 On offer is a fascinating, original Ante Bellum era manuscript letter and relic of the Deep South and the trade in human beings and the brutal economic facts that went along with those commercialized humans. Addressed and dated May 26 1857 from Brooksville in Blount County Alabama sent to Daniel Cole Esquire, a lawyer and later judge and Senator from Albion New York in Orleans County by his cousin John Wych. The letter has the usual pleasantries between families but soon becomes a platform for John to bemoan the loss and death of a slave for whom he has paid with credit but now is completely out of pocket: "recently purchased 2 Negro women with the intent of selling them -worth about 2,000$ ...i sent one with my wagon to camp and she took fire to her clothes and burned to death...which was a total loss to me and has damaged my business since a note is due on her purchase" His business suffers though he remains slightly optimistic. There is related talk of an estate that is to be settled and he discusses his involvement. The one and a quarter page 9½ x 8 inch letter is overall VG.

Title: 1857 ORIGINAL ANTE BELLUM MANUSCRIPT LETTER HANDWRITTEN BY AN ALABAMA MAN IN A FINANCIAL PREDICAMENT FROM THE LOSS OF HIS COMMERCIAL PROPERTY BY FIRE