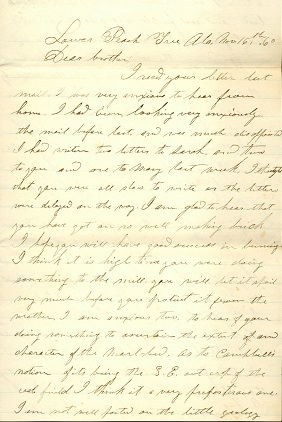 1858 - 1876 ORIGINAL GROUP OF 17 MANUSCRIPT LETTERS HANDWRITTEN BY A NORTH CAROLINA MAN NOW LIVING IN ALABAMA DETAILING TO HIS SISTERS AND BROTHER ALL ABOUT HIS LIFE IN THE DEEP SOUTH BEFORE, DURING AND AFTER THE CIVIL WAR

On offer is a super, original archive of 17 manuscript letters handwritten by teacher and 'farmer', though gardener would be more apt in the early years, Archibald M. McLauchlin, originally of North Carolina, writing from a number of locales over the years all in Alabama, who maintains a correspondence with family back home; sisters Mary and Sarah and brother Neill. [While there are no covers we know the family live in North Carolina.] Archie as he often signs himself writes between 1858 and 1876 mostly from Lower Peach Tree Alabama [13: 1859, 1860 (3), 1866, 1867, 1869 (2), 1870, 1873, 1872, 1875, 1876], Eufaula Barbour County [1: 1858], Lowndes County Alabama [1: 1859] and Ashe (sometimes Ash) Creek Alabama [2: 1858, 1859]. This fascinating group of historical letters is richly filled with details of Archie's life and times in the Deep South and all the more interesting as they span the pre Civil War era with the post Civil War era. The letters are very detailed newsy 'catch up' letters though there are a couple of dominant threads in each one. Here are some snippets: May 7th 1859 Ashe Creek. 6 pgs. Much to do about crops, gardens and living off the land. He begins: 'Dear Sister Why comes no letter from home? Why stays so long the messenger of glad tidings? It is now more than a month since Sarah's letter came to hand, more than a month since I wrote to Sarah sending a specimen of our vegetation, a month and a half since I wrote to Pa. Were these letters received?" From there he discusses different vegetables farmed by various friends and himself, the state of his students four of whom he expects to go to college, one for Oglethorpe, three for Marion Alabama [likely the Marion Military Institute], reports on the healthy qualities of Lower Peach Tree which was of great concern to him until he was given information from a dependable source, his traveling from 'North Carolina not minding the chills but the fever'. Sept 5th 1859 Lower Peach Tree Wilcox County Alabama. 4 pages. Beginning Dear Sister Mary he tells much of his move from Lowndes to Lower Peach Tree especially the level of his surprise at his regret leaving all the people he got to know there. In his return to the area he once taught he makes mention of his times in the Baptist Church. He goes into great detail on how his entrance and acceptance in a new Church felt and how he was treated. The entire very well filled letter centers on life in Lower Peach Tree. December 26th 1866 Lower Peach Tree. Written over a period of a week or so Archie writes a super, historically significant content filled 4 page letter which goes a long way to reveal some of the difficulties in the 'new reality' of post Civil War Alabama and the South. He begins with serious concerns: 'Sarah I received a letter from you about a month ago. I am sorry to hear you are not getting along well with the freemen. I hardly know what to advise. It is a hard matter to get along with the rascals anywhere at any time. I am bothered with some of them here. Rose took a notion to leave last Friday night. By doing so she has forfeited her years wages. I had paid her part but not much. I shall not pay her anymore til she gives full satisfaction. I would make her stay here next year but she has got to having babies too fast. She will have another in about four or five months….Kate [his wife] had another attack of the fever about a week after she [a new daughter] was born. She has been having periodic returns of the fever ever since I came back home. It has been very much against her and the baby to have fever.' He goes on to discuss the year past from a personal perspective of getting married and having a child but also the past relations with his family. The letters vary in size from 9 x 7 inches to 4 x 6 inches. Overall VG.

Title: 1858 - 1876 ORIGINAL GROUP OF 17 MANUSCRIPT LETTERS HANDWRITTEN BY A NORTH CAROLINA MAN NOW LIVING IN ALABAMA DETAILING TO HIS SISTERS AND BROTHER ALL ABOUT HIS LIFE IN THE DEEP SOUTH BEFORE, DURING AND AFTER THE CIVIL WAR

1858 - 1876 ORIGINAL GROUP OF 17 MANUSCRIPT LETTERS HANDWRITTEN BY A NORTH CAROLINA MAN NOW LIVING IN ALABAMA DETAILING TO HIS SISTERS AND BROTHER ALL ABOUT HIS LIFE IN THE DEEP SOUTH BEFORE, DURING AND AFTER THE CIVIL WAR