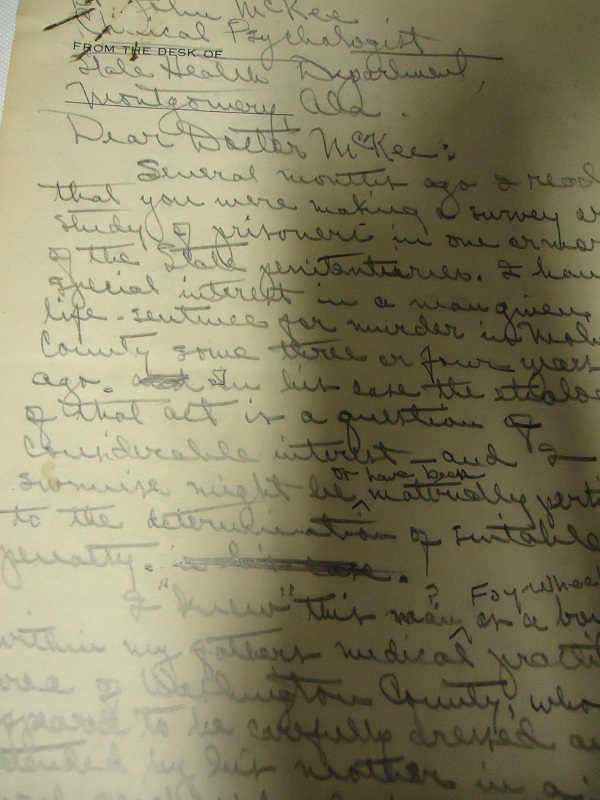 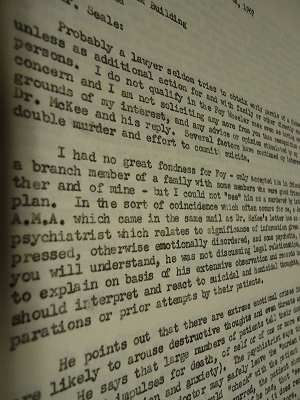 On offer is a fascinating group of manuscript letters and ephemera [18 pages] relating to a circa 1960s double homicide murder case in Mobile Alabama involving a well-known barber, the prison warden a lawyer and a doctor. The letters provide unique insight with three letters received by Dr. O.L. Chason; two are from: Seale, Marsal, Seale & Duke Lawyers, 1st letter dated Dec. 27th, the 2nd letter May 11th 1967, 3rd letter is from: John M McKee of the Rehabilitation Research Foundation in Elmore Alabama, dated February 1st 1967; a correspondence copy from Dr O.L. Chason, typed copy to Dr. John McKee dated January 5th 1966, two page copy to Mr. Harry Seale dated February 6th, three page letter by O.L. Chason on letterhead to Harry Seale Dated February 6th 1967 including three page draft; typed copy of three page letter from John M Mckee to O.L. Chason; finally a handwritten seven page draft to Dr John McKee about Foy Wheeler on small stationary sample from Raleigh W. Shamrock Rep. Gulf State Sales Corp. Mobile Alabama. Much of the tale involving 'The Barber, The Doctor, The Lawyer, Mr Lee and the Double Murder in Mobile County, Alabama' is told in the handwritten letter to Dr Mckee by Dr. O.L. Chason letter January 5th, 1966. The letter is about the research paper Mckee had done on a survey of prisoners in state pen given life in Mobile co. and a question about Foy Wheeler a childhood acquaintance. Foy was a successful barber that Dr Chason patronized. In 1935-1945 Foy moved his establishment to the Hotel Battle Ship around the time war started. Chason talks about how successful Foy was as barber, hunter, fisherman and how Foy would like to boast about his skills. Then goes into talk about the double murder. How Foy had been drinking a good bit.....then talked about the fateful day how his wife and sister had been picking or nagging him and how Foy walked over picked up the shotgun and killed both of them and then placed the barrel under his chin and tried to kill himself. Someone had heard the shots form outside and came running in. Foy's wounds were not fatal. Then letter goes on to say how Dr. Chason could not imagine Foy as a positive aggressive murderer. Foy's action where more out of desperation than planned or calculated. And also how he felt that alcohol also played a factor. The letter then goes on to say Seale wanted Chason to testify on Foy's behalf. But how Chason did not feel qualified to do so. He just was pointing out that he did not think it was a calculated murder and that it should be considered for more study by qualified person. Chason then states how Seale was disappointed, because he had never had a client sentenced to death before. Did not feel that Foy could be seen as a first degree murder. Foy himself counts himself as a victim that had to take drastic step to a solution of his household problem. Seale does not think it was deliberate plan. Chason goes on to say Foy may be dead by now or may still need punishment. But how he was wanting to see if people doing the study understand his actions and then goes to request a reply. The letter dated February 1, 1967 Dear Dr. Chason from Dr. John Mckee states: 'Delighted to hear from you after so many years. Spoke with Mr. A. Frank Lee of the Commission of Correction in regards to Foy Wheeler. Found out Mr Wheeler is a kind a gentle man and does a fine job barbering and adjusting to prison life. With him being in Atmore it is difficult for me to check in on him. Mr Lee states he knows Wheeler personally and Lee states that a murder like the one he committed occurs once in a lifetime. The description that you gave about him being nagged into it by two females would fit the picture quite adequately. Mr Lee further states that Foy will probably get out of prison within a reasonable length of time. Also suggest Chason write parole board on Wheeler's behalf. Further letters continue the conversation and some entries include personal, ribald anecdotes between the men. Overall VG.

Title: 1966 ORIGINAL GROUP OF MANUSCRIPT AND TYPED LETTERS REGARDING A NOTORIOUS DOUBLE MURDER AND ATTEMPTED SUICIDE IN MOBILE ALABAMA IN THE 1940s