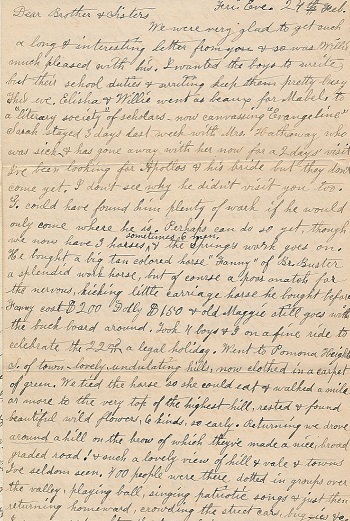 On offer is an original late 19th Century interesting, closely written, long, descriptive four [4] page manuscript letter dated (Pomona, California) Feb 24 (1888) from "Sarah," to her brother and sisters care of W. D. Yale, Houseville, Lewis County, New York, with printed religious tract envelope franked with US 2c green postage stamp, Pomona, Feb 25 postmark. Here are some snippets: "We now have 3 horses & sometimes 6 men & the Springs work goes on. He bought a big tan colored horse 'Fanny' ... a splendid work horse, but of course a poor match for the nervous, kicking little carriage horse he bought before. Fanny cost $200, Dolly $150 & old Maggie still goes with the buckboard around. Took 4 boys & I on a fine ride to celebrate the 22nd [George Washington's birthday], a legal holiday, went to Pomona Heights, s[outh] of town, lovely undulating hills, now clothed in a carpet of green. We tied the horse so she could eat & walked a mile or more to the very top of the highest hill, rested & found beautiful wild flowers, 6 kinds, so early. Returning we drove around a hill of trees brow of which they've made a nice, broad graded road! And such a lovely view of hill & vale & towns ... 400 people were there dotted in groups over the valley, playing ball, singing patriotic songs & just then returning homeward, crowding the street car, buggies etc. I've never rode after the team but once to the upper place. Our old place looks forlorn enough, all left in ruins, broken brick from the cellar scattered all around. They took all they could for a foundation to the house in its new place. Have set it up high, 5 steps to go up, made the front door into a window, cut door from that room on to the piazza & painted the roof & that's all. Have Center St. & one cross street nicely graded now & there is more travel there than on this quiet st[reet]. We have but 3 neighbors beyond us. One is away ½ the time & one has no team to travel it. We miss the beautiful dark green orange trees, with their golden fruit, that used to surround our house. Here is nothing but bare leafless pear trees. Under one of them I have a bed of sweet scented blue Eng[lish] violets & 2 geraniums ... barley hay ... is all baled ... [bales that] weigh over 200 lbs. are piled around the sides of the upper barn floor, leaving a space in the center big enough to pitch a tent & under that the boys have their bedsteads, trunks, etc. One for Milo & Willie, a single one for Elisha ..." Writes of having lots of company ... "we were 'taken' last Mon[day] when 5 members of the Board of the new school that is to be marched in with 2 of our neighbors as escorts ... They rode around town next morn[ing], had a business meeting, but arrived at no conclusion yet! Wonder if they ever will! [For Valentine's Day] Willie bought two, but recd. none, while Elisha sent one & received two, one comic & one rather pretty ..." Mentions that the man doing their brick work took a 3 week old calf home to give to his lonely, childless wife for a pet. "Thought they could feed it porridge, so it would do well, but I don't know ... We saw no eclipse, or not much -- 'twas too cloudy ... The house was moved on rollers, a slow job, until they got it turned ½ way around & into the road, then they went faster. It now faces south. Had but one horse with pulleys &c. ... Don't think Milo expects to go to school any more, or cares much about doing so. He likes farming, plowing &c. if he only had the strength. Has been pretty well lately, has painted some, while another man uses the team. He likes to paint ... [signed] Sarah. Both postal cover and 5 x 8 inch lettersheets are in good condition.