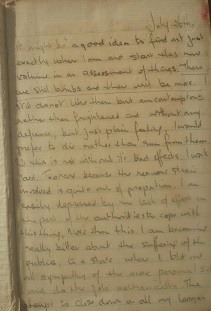 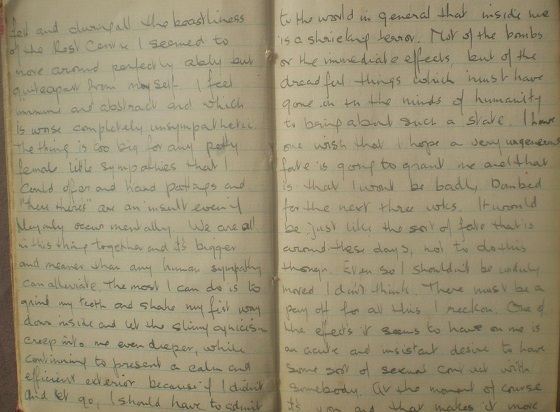 On offer is a sensational, original manuscript notebook handwritten during the summer of 1944 in London during the horrible 'Buzz Bomb' onslaught or V1 campaign that began in June of 1944 by Nazi Germany. Not merely a home front diary filled with 60 pages of street view entries of life and living conditions during the awful summer of 1944 from an astonishing woman in even more astonishing circumstances along with the back drop of death coming from the air from July 26th through to August 22nd this not quite month long diary is a treasure of emotion, a significant memoir of the time and a couple of movies rolled into one. The unidentified author, a woman of education, practicality and sensuality, she is also a symbol of British steadfastness and the 'keep calm and carry on' spirit that propelled England in its determination to defeat the Germans. The definition of indomitable she begins the journal: July 26th 'It might be a good idea to find out just exactly where I am and start this new volume in an assessment of things. There are still bombs and there will be more. I still do not like them but am contemptuous rather than frightened and without any defiance but just plain feeling I would prefer to die rather than run from them. All this is not without its bad effects. I work hard. Too hard because the nervous strain is quite out of proportion. I am easily depressed by the lack of effort on the part of authorities to cope with this thing, more than this I am becoming really bitter about the suffering of the public, to a state where I blot out all sympathy of the more personal sort and do the job mechanically. The attempt to close down on all my larger emotions is successful but will have its payoff and I a dull deadly dull.' Further reading and we learn she appears to be living with two men, one an artist, Arthur who 'drew his usual series of dead and staring bodies and bombed buildings', the other a writer. Like the plot of a movie this seems to be a love triangle or more apt a want-to-be-love triangle: 'After a couple of hours it dawned on me they weren't talking in the abstract at all and that even without my amazing ego's influence it was possible John at any rate had a pretty good idea of the woman he would share with Arthur. Me for instance.' A fascinating woman, the type who calls other men's girlfriends wenches and a pragmatic gal who admits she figures John will use her as 'a stop gap' and references to her own needs and why they are unmet. A mere month if that and packed with drama, intrigue and historic perspective by a very capable and erudite woman. The pressures of the day jump from the page with much talk of fire watching and the result of stresses on those living through a possible death at any moment from the sky: her Mother accuses Father of a dalliance with Molly, and the writer's own turmoil. Add the precariousness of life, the pervasiveness of death all the while on the front line of terror makes for a singularly unique diary. Overall G.; Manuscript; 16mo - over 5¾" - 6¾" tall; KEYWORDS: HISTORY OF, AIR RAIDS, BOMB SHELTERS, WAR AGAINST GERMANY, NAZIS, HITLER, CHURCHILL, WW2, WWII, WORLD WAR 2, WORLD WAR II, BUZZ BOMB, V1, V-1 FLYING BOMB, VERGELTUNGSWAFFE 1, DOODLEBUG, KIRSCHKERN, CHERRYSTONE, MAIKÄFER, MAYBUG, PULSEJET-POWERED CRUISE MISSILE, BATTLE OF BRITAIN, BOMBARDMENT OF LONDON, LUFTWAFFE, BRITISH WAR EFFORT, BRITISH SPIRIT, BRITISH HOME FRONT, ENGLAND WAR EFFORT, ENGLISH SPIRIT, KEEP CALM AND CARRY ON, INDOMITABLE SPIRIT, BRITANNICA, HANDWRITTEN, HANDWRITTEN, MANUSCRIPT, AUTOGRAPHED, AUTHORS, DOCUMENT, LETTER, AUTOGRAPH, KEEPSAKE, WRITER, HAND WRITTEN, DOCUMENTS, SIGNED, LETTERS, MANUSCRIPTS, HISTORICAL, HOLOGRAPH, WRITERS, AUTOGRAPHS, PERSONAL, MEMOIR, MEMORIAL, PERSONAL HISTORY, ARCHIVE, DIARY, DIARIES, JOURNAL, LOG, PRIMARY SOURCE, FIRST HAND ACCOUNT, SOCIAL HISTORY, PERSONAL STORIES, LIVING HISTORY, ANTIQUITÉ, CONTRAT, VÉLIN, DOCUMENT, MANUSCRIT, PAPIER ANTIKE, BRIEF, PERGAMENT, DOKUMENT, MANUSKRIPT, PAPIER OGGETTO D'ANTIQUARIATO, ATTO, VELINA, DOCUMENTO, MANOSCRITTO, CARTA ANTIGÜEDAD, HECHO, VITELA, DOCUMENTO, MANUSCRITO, PAPEL,BIOGRAPHY BIOGRAPHICAL AUTOBIOGRAPHICAL AUTOBIOGRAPHY PERSONAL NARRATIVES

Title: 1944 ORIGINAL MANUSCRIPT DIARY HANDWRITTEN BY A VERY CAPABLE WOMAN SUFFERING THROUGH THE MECHANICS OF A LOVE TRIANGLE WHILE DEATH RAINS FROM THE SKY DURING THE SUMMER OF THE BUZZ BOMB AND HITLER'S V1 CAMPAIGN TO TERRORIZE ENGLAND & BREAK BRITAIN'S SPIRIT