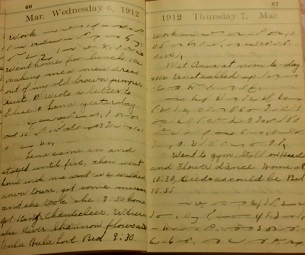 On offer is a fascinating, enigmatic, original 1912 Los Angeles California manuscript diary handwritten by Miss Emma Gerz. A secretary we believe who employs shorthand throughout the 95% filled diary which makes for very intriguing reading. While she is rather open in regular cursive one can only imagine some of her perhaps more intimate entries and more cutting comments [she is sometimes catty]. We also learn she went on picnics, the different plays she's in, taking lessons, a fellow she likes named Billy, a man asking her to go to the beach sometime, and her telling him off, life with her parents and that she plays basketball and goes to the gymnasium regularly for theatrical rehearsals. Talented enough at piano she gives lessons her first love is the stage and she tries out for a number over the year; when she finds out her part she is outraged: 'Went to see Mr. Earnest and he gave me the part of a Negro mammy ah….[shorthand]….mama is angry about it too.' Miss Gerz in general is not a happy person though for the most part though she is surrounded by friends, has dates, goes to nice restaurants and sees shows and does get parts in productions. She suffers from headaches, feels low and bemoans her luck: 'No one called. Guess our phone has forgotten how to ring.' Eeyore has nothing on Emma Gerz. She has a large circle of friends through clubs and such and there appears to be a big connection with the German community as most of the people she mentions have Germanic last names. She moves about Los Angeles almost daily as she attends 'Masquerade' exercises, climbing Figueroa hill, gives piano lessons, going to the Wallis Dramatic School and much, much more. Fascinating look at this intriguing young woman's life in Los Angeles with the back drop of the early motion picture business happening all around her. Overall G+.; Manuscript; 16mo - over 5¾" - 6¾" tall; KEYWORDS: HISTORY OF, EMMA FREIDA GERZ, LOS ANGELES CALIFORNIA, LA, SOUTHERN CALIFORNIA, WOMEN'S STUDIES, GENDER STUDIES, WHITE PERSON PLAYING A NEGRESS, MAMMY, GENDER STUDIES, PEDRO, FIGUEROA HILL, BLACK FACE, GERMAN IMMIGRANTS IN LOS ANGELES, EARLY MOTION PICTURE INDUSTRY, AMERICANA,HANDWRITTEN, HANDWRITTEN, MANUSCRIPT, AUTOGRAPHED, AUTHORS, DOCUMENT, LETTER, AUTOGRAPH, KEEPSAKE, WRITER, HAND WRITTEN, DOCUMENTS, SIGNED, LETTERS, MANUSCRIPTS, HISTORICAL, HOLOGRAPH, WRITERS, AUTOGRAPHS, PERSONAL, MEMOIR, MEMORIAL, PERSONAL HISTORY, ARCHIVE, DIARY, DIARIES, JOURNAL, LOG, PRIMARY SOURCE, FIRST HAND ACCOUNT, SOCIAL HISTORY, PERSONAL STORIES, LIVING HISTORY, ANTIQUITÉ, CONTRAT, VÉLIN, DOCUMENT, MANUSCRIT, PAPIER ANTIKE, BRIEF, PERGAMENT, DOKUMENT, MANUSKRIPT, PAPIER OGGETTO D'ANTIQUARIATO, ATTO, VELINA, DOCUMENTO, MANOSCRITTO, CARTA ANTIGÜEDAD, HECHO, VITELA, DOCUMENTO, MANUSCRITO, PAPEL,BIOGRAPHY BIOGRAPHICAL AUTOBIOGRAPHICAL AUTOBIOGRAPHY PERSONAL NARRATIVES

Title: 1912 ORIGINAL MANUSCRIPT DIARY HANDWRITTEN BY AN ENIGMATIC YOUNG LOS ANGELES WOMAN TRYING TO BECOME A STAGE ACTRESS ONLY TO BE OUTRAGED WHEN SHE IS CAST AS A 'NEGRO MAMMY'