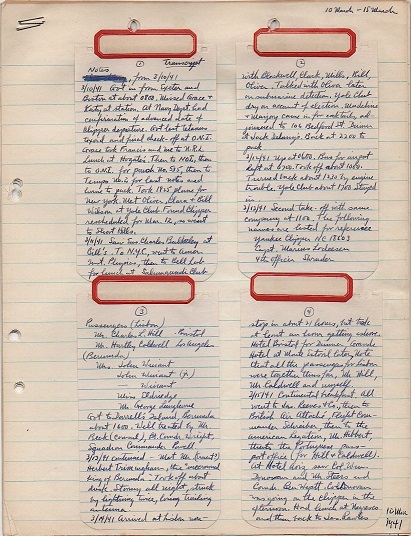 On offer is a super, very interesting, historic, original World War II manuscript diary handwritten by American physicist Capt. Louis McKeehan, (1887-1975) head of the Mine Warfare Branch of the Bureau of Ordnance, Director of the Physics Laboratories Yale among other noted positions. The diary is comprised of 37 pages of entries originally in a smallish flip style notebook now mounted four to a page on paper. The diary is a significant record beginning March 10, 1941 through to May 25, 1941 detailing his hazardous travels to England and a record of his important meetings and appointments and contacts with each diary page filled with many dozens of Government, Military and Admiralty personnel not to mention the vast number of doctors and scientists he met with too. Each 5 x 2¾ note page is filled with data meticulously written as befits a scientist of his calibre. Historians and researchers will understand that this trip is many months before America would enter the War and there was controversy that America should have any involvement while clandestine efforts to assist England were on going. In fact the Lend Lease Act would be passed in Congress the very next day the Captain's trip starts. It is also to be noted this trip occurs at a desperate time for the British. Setbacks in Italy, Greece and the terror of the air bombing campaign were all part of the backdrop to this narrative. BIO NOTES: McKeehan's life makes for a fascinating story of a dedicated 'outside the box thinker'. He took leave of his teaching position to help out with the war effort. He was the driving force behind the creation of the torpedo called Fido. Scientists at the Naval Torpedo Station at Newport, Rhode Island had been considering acoustic homing torpedoes for fifteen years but insisted that torpedoes made too much noise themselves to be able to home on any external noise source and until McKeehan came along to challenge them they seemed to have a point. But McKeehan was not a career naval officer. He was a reserve officer, on active duty for the duration, whose peacetime job was director of the physics laboratories at Yale University. Unimpressed by the received wisdom of Navy engineers, McKeehan turned to HUSL and BTL where his idea for an acoustic homing torpedo quickly bore fruit. With support and funding from the NDRC, HUSL and BTL proved Newport wrong and only seventeen months after the beginning of the project Fido had entered service and made his first kill. After the war, the scientists at Bell Labs who had worked on Fido returned to telephone work, Captain McKeehan returned to Yale, and Harvard - like some other universities - anxious to shed the military connection as soon as possible took back its buildings and ended its classified work. BIO NOTES: Louis McKeehan was, among other things, author of Yale Science: The First Hundred Years, 1701-1801 (New York: H. Schuman, 1947).

Title: 1941 ORIGINAL MANUSCRIPT DIARY OF A CRITICALLY TIMED TRIP TO WAR TORN ENGLAND BY AN AMERICAN PHYSICIST WHOSE DETERMINATION AND OUTSIDE-THE-BOX THINKING WILL PERFECT THE ART OF TORPEDO WARFARE