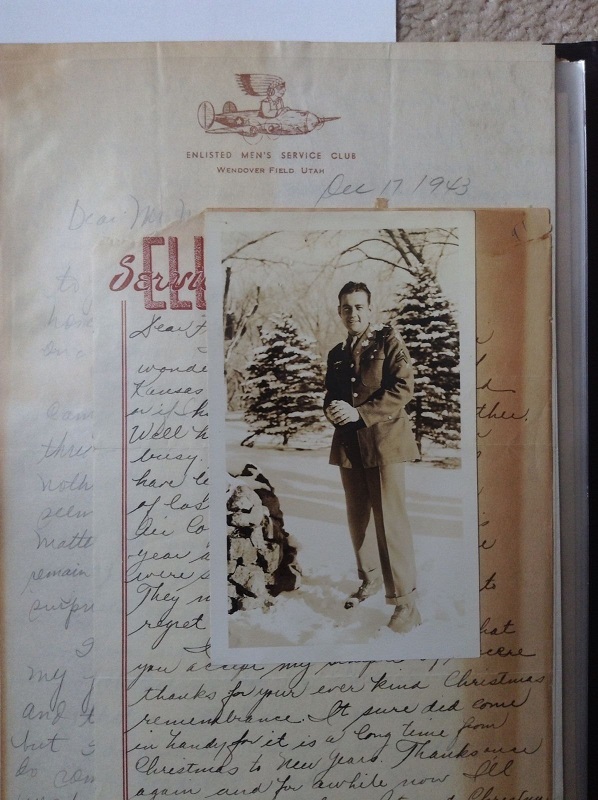 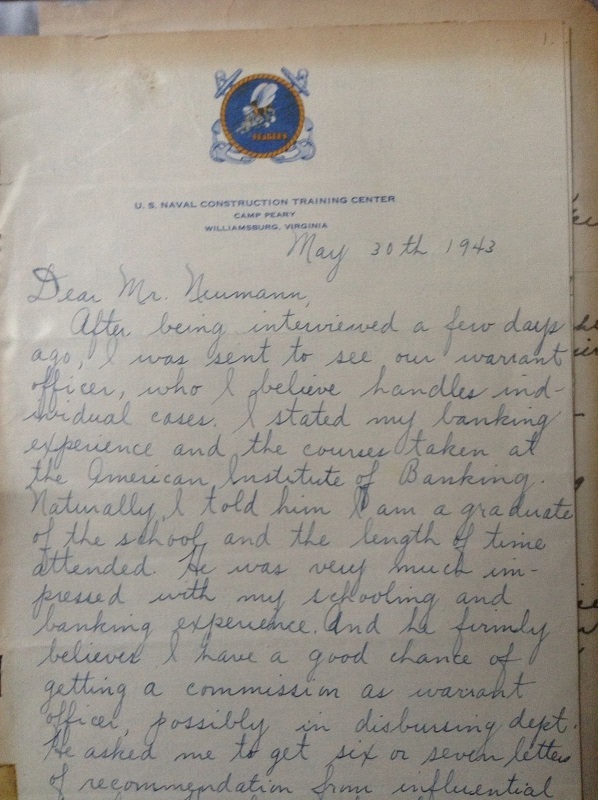 By: to GEORGE NEUMANN

On offer is an absolutely sensational grouping of 100+ letters both typed and handwritten all addressed to a singularly superb individual named George Neumann. Mr. Neumann earns these accolades not just from this reader but as can be read by 100% of the correspondents who have written him in this archive of incoming letters are for the most part letters of appreciation, thank yous, updates on the serviceman's duties and experiences and many express themselves to this father-like figure; their hopes and dreams about the war and after to this wonderful and kind spirited man. These letters all relate to George's home front support of those who went to serve their country in World War II. The Manager of the Lincoln Bank in Flatbush Brooklyn New York George took it upon himself to write and send gifts like the Readers Digest to soldiers who had some connection with the Bank, former employees, likely spouses of employees etc. So welcome were his letters and gifts, so heartwarming the responses as Mr. Neumann personally wrote them and not simple notes but intimate letters of information like births and local news and heartfelt wishes. Historians and researchers of home front America will have no better look at this topic as well reflected by the words of thanks and the returned intimacies shared by those so appreciative of George's outreach. There are no medals for this part of the War effort but Mr. Neumann was sure deserving of accolades. Overall G+.; Manuscript; 4to - over 9¾" - 12" tall; KEYWORDS: HISTORY OF, GEORGE NEUMANN, WWII, WORLD WAR II, WORLD WAR 2, WW2, HOME FRONT, TROOP SUPPORT FROM HOME, LINCOLN BANK, FLATBUSH BROOKLYN NEW YORK, AMERICANA, HANDWRITTEN, MANUSCRIPT, AUTOGRAPHED, AUTHORS, DOCUMENT, LETTER, AUTOGRAPH, KEEPSAKE, WRITER, HAND WRITTEN, DOCUMENTS, SIGNED, LETTERS, MANUSCRIPTS, HISTORICAL, HOLOGRAPH, WRITERS, AUTOGRAPHS, PERSONAL, MEMOIR, MEMORIAL, PERSONAL HISTORY, ARCHIVE, DIARY, DIARIES, JOURNAL, LOG, PRIMARY SOURCE, FIRST HAND ACCOUNT, SOCIAL HISTORY, PERSONAL STORIES, LIVING HISTORY, ANTIQUITÉ, CONTRAT, VÉLIN, DOCUMENT, MANUSCRIT, PAPIER ANTIKE, BRIEF, PERGAMENT, DOKUMENT, MANUSKRIPT, PAPIER OGGETTO D'ANTIQUARIATO, ATTO, VELINA, DOCUMENTO, MANOSCRITTO, CARTA ANTIGÜEDAD, HECHO, VITELA, DOCUMENTO, MANUSCRITO, PAPEL

Title: 1942 - 1945 ORIGINAL GROUP OF 100+ LETTERS SENT IN THANKS AND GRATITUDE TO AN EXEMPLARY AMERICAN WHO MADE IT HIS SERVICE DURING WORLD WAR II TO LIFT THE SPIRITS AND FEED THE SOULS OF THE SOLDIERS AND SERVICEMEN WHO GAVE THEIR ALL