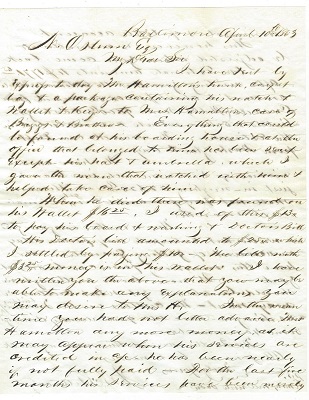 By: JEROME B STILSON

On offer is a super, original Civil War manuscript letter handwritten by Jerome B. Stillson, Baltimore, MD to Nehemiah Osburn, Rochester, New York. Stilson is in the process of building the Baltimore Courthouse, a project started in 1860, put on hold due to the War and then restarted sometime later as evidenced by the 1863 letter to Nehemiah Osburn scion of a construction empire in charge of the project. Given the ferocity of the war and Baltimore's location on a major fault line the construction letter is as fascinating as significant. First Stilson, a very pious Christian and kindly man, discusses a special duty he is performing for a deceased man's family then on to the construction work. Here are some snippets: "Baltimore April 10th 1863 N. Osburn Esq My Dear Sir I have sent by express to day Mr. Hamilton's trunk, carpet bag & a package containing his watch & wallet & keys to Mrs. Hamilton care of Briggs & Brother [a major seed merchant in Rochester]. Everything that could be found at his boarding house & at the office that belonged to him has been sent except his hat & umbrella which I gave the man that watched with him & helped take care of him. [Apparently Hamilton was another employee of Osburn who has died in Baltimore and Stillson is doing his duty to return Hamilton's belongings] When he died there was found in his Wallet $16.25. I used of this $13 to pay his board & washing & Doctor's Bill. His doctor's bill amounted to $25 which I settled by paying $10 -- The bills with $3.25 money is in his wallet. I have written you the above that you may be able to make any explanations you may desire to Mrs. H. -- In the meantime you had not better advance Mrs. H. any more money as it may appear when his services are credited in a/c - he has been nearly if not fully paid -- For the last five months his services have been merely minimal & of little account. [Stillson had kept the sick Hamilton on the payroll even though he did little. There is no more money for Mrs. Hamilton.] This however is a matter to be adjusted when you come back.' As to business: 'Our estimate amounts to $1771.65. After writing you that the estimate would amount to about $1200 we received from Creswell (Phila) [Samuel J. Creswell Ironworks 1835-1969] some 9000# castings lintels & sills -- which are included in the estimate. We received our draft from Washington to day. [The Federal Government has sent payment]. We have another invoice of six & nine inch iron beams just in weighing 22,620 lbs. -- These we shall not pay for until we get estimates next month. The weather is again good & we do not anticipate any further delay on account of getting granite. We have this morning four carloads at the yard. It now looks as though we should be able to get what cutters we may want - The cutters on the Treasury building Washington all quite recently discharged some forty in number. McQuatters arrived this morning [James McQuatters an Irish immigrant and Rochester mason] all o.k. All join in best wishes Truly Yours J.B. Stillson P.S. Emory [Emory W. Osburn (1837-1925) Nehemiah's son and would be a contractor/inventor] will write soon.' Overall G+.