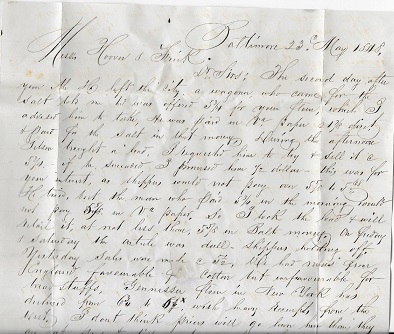 On offer is a fascinating, original pair [2] of manuscript letters which typically begin with the author's business dealings in various goods quoting sales prices for goods in local currencies of Virginia and Baltimore, at this time banks issued their own currency and then evolves into a very insightful letters on the local and overseas politics of the day. The first written on the 23rd of May 1848, the day after the Democratic National Convention opened in Baltimore, Lewis Cass the nominee as the letter predicted. (James Buchanan was one of two others vying for the nomination) ".......a wagoner, who came for the salt told me he was offered 5 3/4 for your flour, which I advised him to take. He was paid in Va. paper.....in that money (talks about another load) I took the load + will retail it, at not less than 5 5/8 in Balt. money. Our city is now full of strangers. The General Assembly of the Presb. Church Of The U.S. is in session here, probably 250 clergymen in attendance, + the Democratic Convention to nominate a candidate for the presidency -- it is supposed General Cass will be the man.......the accounts from all parts of the country are favourable for the coming crops. When the Steamer Harman left Southampton, everything was quiet in France. The Lamartine Party triumphed. I hope the convention may frame a republican constitution in peace; it would be the means of carrying civil + religious liberty to the downtrodden masses of oppressed Europe. Wish but wishes yours very respectfully William Wilson". The folded letter sheet, 8 3/8" x 13" of the stampless cover, featuring a light blue Baltimore date stamp and bold blue "5" postal rate has one hole near wax seal, filled in, effects parts of two words and a couple of small edge tears neatly mended with archival tape. The second dated June 30th 1849 "......Business is very dull + the weather remarkably warm. Our city is healthy. not one case of Cholera while pestilence is raging all round us. We have much cause for gratitude. We have late news from England this morning. A resurrection has broken out in Paris, but was suppressed by 70,000 soldiers. The French army had attacked Rome -- + report says that 800 romans were killed, + that thy romans are invincible. Great confusion continues to exist throughout Germany. Flour had advanced about 6d (pence) per barrel in Liverpool + the crops looked very favorable...." Overall G.

Title: 1848 + 1849 ORIGINAL PAIR [2] MANUSCRIPT LETTERS HANDWRITTEN BY A BALTIMORE MAN WHO HAS A GRASP OF BOTH THE LOCAL AND INTERNATIONAL POLITICS OF THE DAY