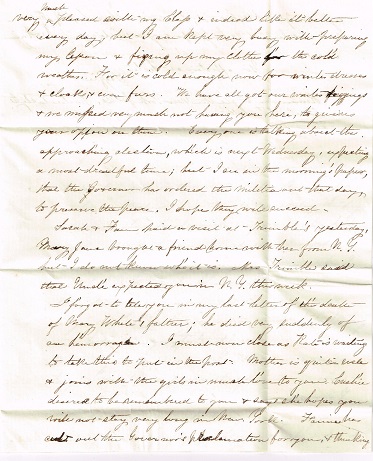 On offer are an original, interesting pair [2] of 1857 manuscript letters, October 29th then November 9th handwritten by Lizzie to her brother Thomas J Morris in New York City. The letters are breezy, intimate familial notes that are peppered with the concerns of the day: "You have probably learned through the newspapers that we had another stormy election mob, withstanding all the measures that were taken to prevent it. We had not, however, any trouble in our neighborhood". "Everyone is talking about the approaching election, which is next Wednesday, expecting a most dreadful time, but I see in the morning's paper that the governor has ordered the militia out that day to preserve the peace. I hope they will succeed." The seriousness of her concerns are well founded. We quote from an online magazine called Humanities in an article by Martin Ford we learn of the wild abandon election brought to the neighborhoods of Baltimore: Not surprisingly, the disparity in votes among wards was stark. In the 1856 election, 1,013 Democratic votes were tallied in the immigrant 8th Ward, home of the Irish Bloody Eights, while only one Democratic vote was counted in the Plug Ugly's 20th. Know Nothing candidate Millard Fillmore got 21 percent of the vote nationally, but 55 percent in Maryland, the only state he carried, largely due to the Baltimore vote. Not content merely to subtract from the opposition vote, the nativist gangs also sought to multiply votes for their own candidates. A favorite strategy was "cooping." For days before an election, Scharf writes, "honest gentlemen as well as unfortunate wretches," many of them immigrants, would be abducted by the gangs and transported to cellars or sheds-"coops"-where they would be held under conditions described by one victim as "disgusting and horrible in the extreme." Sometimes forced to drink large quantities of whiskey, the hapless captives were invariably robbed and beaten before being transported to the polls in small groups to vote, and vote again. Peter Fitzpatrick testified that he was kept in Plug Ugly Raz Levy's coop, where he recalled that a fellow captive, a German immigrant "had a large beard, and Crab Ashby took a candle and . . . burnt it off." These letters make for a fascinating relic of those rowdy times. Overall VG.

Title: 1857 ORIGINAL MANUSCRIPT PAIR [2] OF LETTERS HANDWRITTEN BY A BALTIMORE SISTER TO HER NEW YORK BROTHER WHO AMIDST THE BREEZY FAMILY TALK VOICES CONCERNS OVER THE ELECTIONS AND THE MOBS