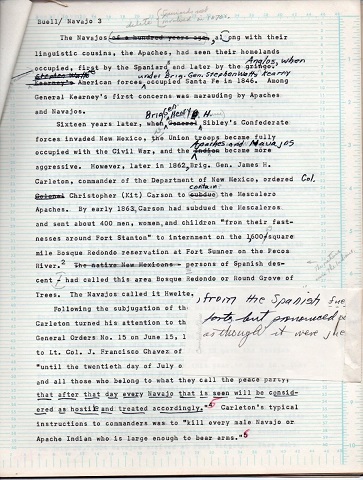 On offer is a fascinating pair [2] of manuscripts dated 1972 one an original of his story LONG WALK: RECOLLECTIONS BY NAVAJOS by Crawford R. 'CR' Buell who atypical of the establishment stories accounts for what happened during the "Indian Wars" not from the Army's or white man's point of view, but from the view of the Navajo and Apache Indians. Of the two manuscripts one is Buell's original, the other is the original edited copy from his editor Al Schroeder. Both are type written with handwritten corrections and notes. Buell's contains 23 pages and Schroeder's contains 25 pages. HISTORIC NOTES: History of the Long Walk: In the early 1860's, the U.S. Army created a plan to move all Mescalero Apaches and Navajos from their land in response to fighting by the Navajo Indians and Americans of European descent, who had begun settling in and around the Navajo homelands. This removal became known as The "Long Walk" because the Apache and Navajo Indians were forced at gun point from their homes in northeastern Arizona and northwestern New Mexico, and made to walk 300-plus-mile to a desolate internment camp along the Pecos River in eastern New Mexico called the Bosque Redondo Reservation (Fort Sumner). The Army's plan began in January 1864, in the dead of winter and lasted for two months. According to historic accounts, some 7,500 to 8,500 men, women, and children were forced to leave, of which approx. 200 Navajos died of starvation and exposure to the elements. The Navajo were kept at the internment camp for 4 years, having endured overcrowding and miserable conditions. In 1868 the Navajo signed the historic U.S.-Navajo Treaty which allowed the Navajo to be freed and to return to only a small portion of their original homeland in Arizona and New Mexico. The U.S. government promised basic services in exchange for peace, and the Navajo began the long walk home on June 18, 1868. BIO NOTES: Crawford "CR" Buell (1902-?) He was a Professional Forester, B.S. in Agriculture, M.A. in Public Administration, Chief Investigator for the U.S. Civil Service Commission, Supervisor for the Bureau of Ordnance, Navy Dept. Washington, D.C., U.S. Postal Regional Compensation Officer, President of Historical Society of Santa Fe N.M., Sheriff of El Corral de Santa Fe Westerners, President of National Assn. of Retired Federal Employees and author. Overall VG.