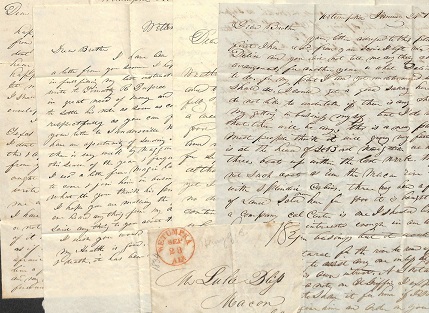 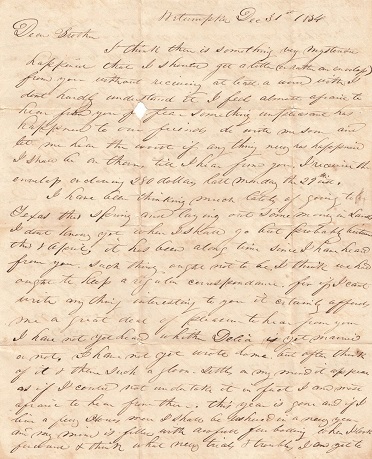 On offer is a super group of five [5] manuscript letters, eight pages or so, four [4] dated 1834 Wetumpka Alabama and one [1] dated 1827 Columbia Texas though referencing Alabama, handwritten by H. G. Bliss [Henry Guest Bliss (1807-1837) b. West Springfield, Massachusetts, d. Texas, 1837] to his brother Luke. The young, 26 in 1834, ill-fated Mr. Bliss lives, works and wishes to invest in Wetumpka during the authorship of these letters but he proves a restless sort and by 1837 he has relocated to Texas only to meet his early death. While in Wetumpka he appears to have been employed in a merchant house. "This is a new place and most people think it will grow very fast as it is at the head of St. Boat navigation. We have had three boats up within the last week...large with splendid cabins." With near seeming prescience he also comments on his foreboding for the future, ill health, buying Wetumpka land and going to Texas. In the one and a half page May 29, 1837 letter he writes of "distressing times in the U States." "I am living in the oldest mercantile house in the country and get good wages. Our trade is very heavy. We are at the head of Ship navigation on the Brasos." "I should like to see the country once settled under a good Government. We should increase in population & wealth faster than any of the new states at the west." He goes on to write that he wants to sell his Wetumpka Alabama property "to lay it out in negroes while they are cheap."

Title: 1834 + 1837 ORIGINAL GROUP OF FIVE [5] LETTERS HANDWRITTEN BY A YOUNG MASSACHUSETTS MAN SEEKING INVESTMENT AND EMPLOYMENT IN ALABAMA ONLY TO MAKE AN ILL ADVISED MOVE TO TEXAS