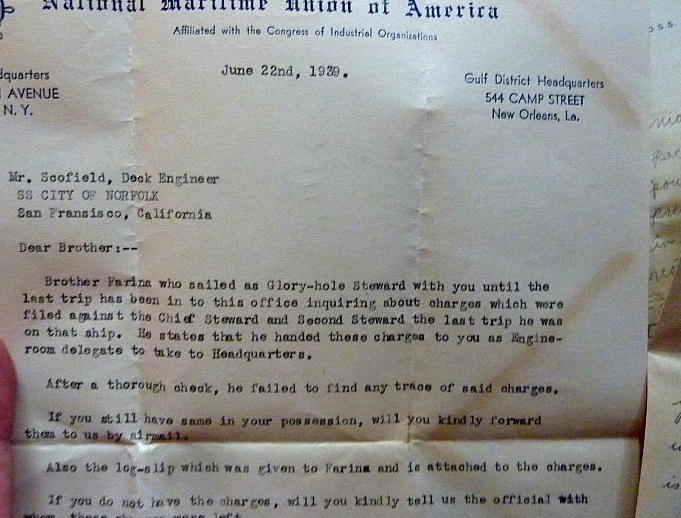 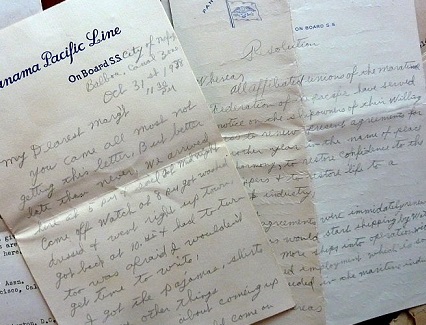 On offer is a fascinating, eclectic archive of original mostly manuscript correspondence and some ephemera relating to Franklin J. Schofield, Deck Engineer aboard the S.S. City of Norfolk. The 120 or so letters date c1935 through to 1950, present a diverse group of papers to flesh out this man's life: husband, sailor, engineer, union representative and much more. There are letters to and from his wife in Baltimore Maryland, there are letters to them both in Baltimore, there are many letters sent to Schofield while aboard ship with postmarks from Cuba, England, Scotland and many other locations. A fair bit of the correspondence relates to his union activities and the concerns of he and his fellow seaman making for a fascinating insight to the machinations of the seafaring unions: one letter from a fellow seaman references a sit down strike in Boston that Schofield helped organize and this seems to have come back to haunt him later in life. There are several typed letters from the Seaman's Union preparing for major unrest and strikes. A particularly fascinating piece of ephemera appears to be a handwritten resolution to negotiate with the powerful ship owners which Schofield wrote while he was aboard ship in Panama. Overall G. HISTORICAL NOTES: One online source: The ship was built by the British Admiralty at Bethlehem Shipbuilding Corporation in Alameda, California, and completed as SS Independence for the War Shipping Board on November 16, 1918. With the commencement of World War I, the ship was acquired by the US Navy and commissioned the USS Independence on November 18, 1918. After service in the War the ship was decommissioned on March 20, 1919 and turned over to the United States Shipping Board for merchant service. In 1930, it was acquired by the Baltimore Mail Steamship Company, rebuilt as a passenger liner, renamed the SS City of Norfolk, and sailed regularly to Europe. In 1940 it was then acquired by the US Navy again, recommissioned the USS Neville and served in both the Asiatic-Pacific and the Europe-Africa-Middle East theaters during World War II. Decommissioned on April 30, 1946, the ship was eventually towed to the James River National Defense Reserve Fleet in Lee Hall, Virginia, and ultimately sold for scrap on March 25, 1957. The USS Neville earned 5 battle stars for World War II service.; Manuscript; 8vo - over 7¾" - 9¾" tall; KEYWORDS: HISTORY OF, S.S. NORFOLK, FRANKLIN J. SCHOFIELD, DECK ENGINEER, MARITIME, NAUTICAL, BALTIMORE, MARYLAND, UNION ACTIVITY ABOARD SHIP, SAILOR'S UNIONS, STRIKES, STRIKERS, UNION REPRESENTATIVES, UNION ACTIVISTS, STEAMSHIPS, THE SEAMAN'S UNION, AMERICANA, HANDWRITTEN, HANDWRITTEN, MANUSCRIPT, AUTOGRAPHED, AUTHORS, DOCUMENT, LETTER, AUTOGRAPH, KEEPSAKE, WRITER, HAND WRITTEN, DOCUMENTS, SIGNED, LETTERS, MANUSCRIPTS, HISTORICAL, HOLOGRAPH, WRITERS, AUTOGRAPHS, PERSONAL, MEMOIR, MEMORIAL, PERSONAL HISTORY, ARCHIVE, DIARY, DIARIES, JOURNAL, LOG, PRIMARY SOURCE, FIRST HAND ACCOUNT, SOCIAL HISTORY, PERSONAL STORIES, LIVING HISTORY, ANTIQUITÉ, CONTRAT, VÉLIN, DOCUMENT, MANUSCRIT, PAPIER ANTIKE, BRIEF, PERGAMENT, DOKUMENT, MANUSKRIPT, PAPIER OGGETTO D'ANTIQUARIATO, ATTO, VELINA, DOCUMENTO, MANOSCRITTO, CARTA ANTIGÜEDAD, HECHO, VITELA, DOCUMENTO, MANUSCRITO, PAPEL,BIOGRAPHY BIOGRAPHICAL AUTOBIOGRAPHICAL AUTOBIOGRAPHY PERSONAL NARRATIVES