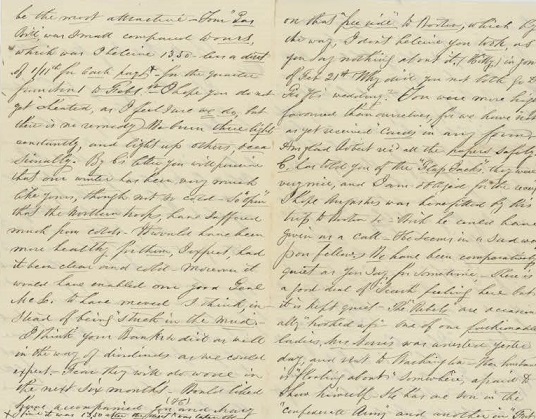 On offer is a super, original 1862 Civil War manuscript letter handwritten by 'Cousin Chas' a Baltimore resident writing his cousins. Amidst the cordial family news and general catching up there is much to be noted regarding war news affecting Baltimore and Chas. Here are some snippets: "…The 'Rebels' are occasionally 'hooked up' - one of our fashionable ladies, her son's was arrested yesterday and sent to Washington - her husband is 'floating about' somewhere, afraid to show himself - he has one son in the 'Confederate Army' and another in 'Fort ???' … a third, about sixteen … is the only one of the family at liberty I believe. Pretty well for one family, and what a sad state of things - so much for 'rebellion'. The crime, the paper says is sending cloths to the 'Traitors' but we hear it was something else. You ask what we think of the 'War'. I have felt from the beginning that it would be short, but many differ from me and some good Union men say they work wish they could feel as sanguine about it as I do. …. I hope his sons may be returned to him in safety… We do like Sammy's present teachers very well. There are two of them, one a 'Secesher' the other 'Union' so they agree not to say anything about 'Politics' in school. The boys are nearly all 'Secesh' to that the 'Union ???' have to stand up for their rights - and they can crow now if they choose (because) your 'Regiments' all did well at Roanoke, but I wonder at the Govt. sending such green hands when there were so many who had been longer in the field. We have a splendid N.Y. Reg. of Zoaves here - paid off when were at 'Great Bethel' who are 'spitting for a fight'. But Genl. Dix, one commander, likes to keep them here." Overall VG.

Title: 1862 ORIGINAL MANUSCRIPT LETTER HANDWRITTEN BY BALTIMORE BASED COUSIN CHAS REPORTING ON THE LOCAL BALTIMORE NEWS AND POLITICS OF THE DAY INCLUDING REBELS 'HOOKING UP' WITH THE LADIES