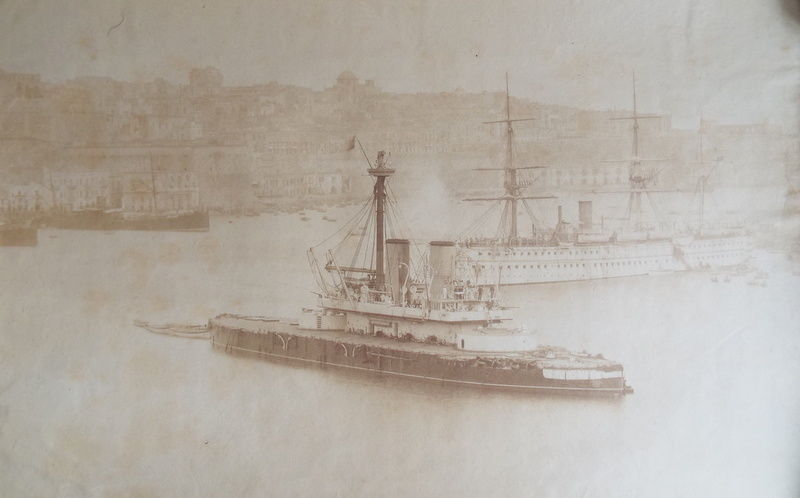 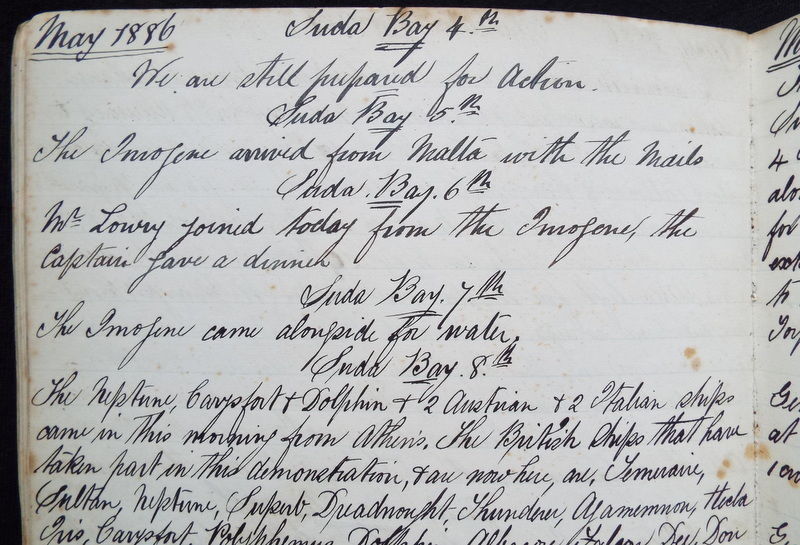 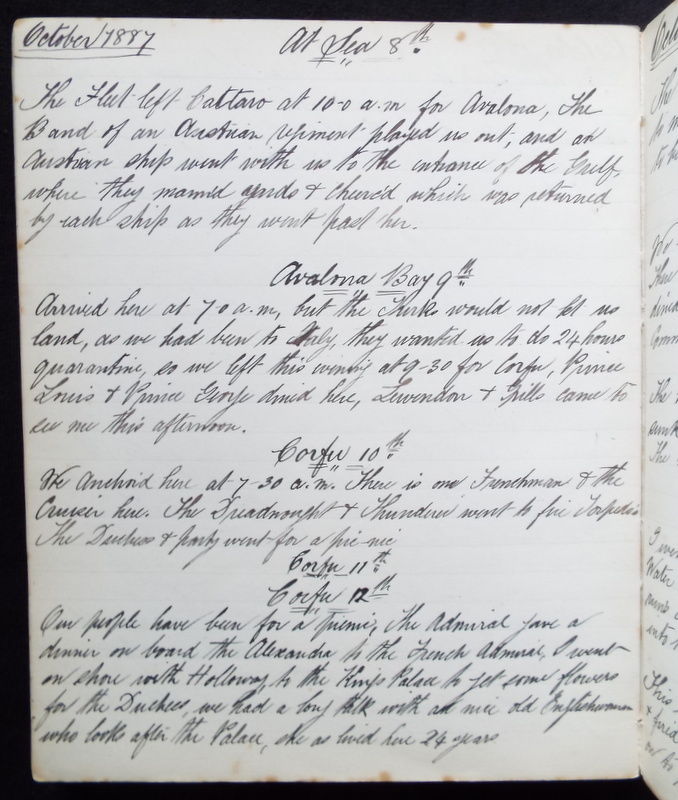 On offer is a super pair [2] of original manuscript diaries handwritten by J.W. Sykes of Greenwich Park while on service with the British Royal Navy, Mediterranean Fleet, 1884 to 1889 aboard the HMS DREADNOUGHT. Our writer has a unique perspective of life both aboard ship and ashore being the steward of the ship's senior officer Commander Bourke [Captain THE HONOURABLE Maurice Archibald Bourke, C.M.G., Royal Navy (22 December 1853 - 16 September 1900) was an officer in the Royal Navy and Captain of the ill-fated HMS Victoria. Sykes at times is a shadow for the Commander as his Steward [think Preserved Killick of the Aubrey-Maturin fiction series by Patrick O'Brian], traveling in the highest circles of command greeting Admirals, Nobles and Royals even serving at their dinners and parties and as a part of the ship's management team he is aware of all that happens with the ship. Even his initial comments on the state of the ship he counts even the number of cutlasses and pistols in the ship's inventory as if her were Purser. He notes almost everything: ships met, guests aboard ship, movement of the Commander and other note worthies. His own movements, those that travel with him, all manner of activities from the mundanities of service to the bone chilling three words every fighting seaman knows 'Cleared for action', there are entries of shore parties for supplies, watering and coaling the Ship, evolutions of practice at manning the boats, etc. to a record of the Ship and the Fleet's movements, ports, observations, weather, repairs, visiting dignitaries and Royalty, Naval commanders, and social activities; records of drinking parties and balls thrown by the Captain, and cricket matches, etc, etc. The first diary begins June 25th 1884. Sykes joined the noted and 'popular' H.M.S. Dreadnought at Portsmouth dockyard in October, after various preparations/trials, the ship sailed for the Mediterranean in November visiting Gibraltar, Malta, Greece, Italy, and Smyrna, Cadiz, Corfu, Athens, Salonika, Venice, San Remo, Adalia just to name a few includes daily entries through to the 8th October, 1888. The first 23.5cm x 19.5cm x 2cm book is rather worn; spine is absent, the flexible covers worn, slightly chipped and rubbed. The diary is ruled throughout. The endpapers and leaf edges are foxed throughout. All, but the last 10 leaves are filled, with the last leaf torn. Due to the missing spine, the contents are beginning to strain/crack in places. The second diary, begins October 17th 1884 at Portsmouth has entries through to the 4th December, 1890 and also has a number duplicate entries and data regarding The Dreadnought. There is a large loose, photograph of the Dreadnought, and a tipped in photograph of HMS Surprise. Many more ports noted especially interesting are the Petersburg, Moscow Russian entries. This hardback book 33.3cm x 21.2cm x 2.1cm bound in half leather and cloth is rather worn, and the corners and edges are bumped, chipped, and frayed. The spine is heavily chipped, with loss and peeling, and the headbands are missing. Internally, the contents are cracked throughout, and thus the endpapers are loosening, and the first leaf is detached. The leaves with the photographs laid down are wrinkled to edges. The one which remains bound has diary entries to verso. All but the last 14 leaves are filled. The leaves themselves are in good condition. Overall G. HISTORICAL NOTES: WIKIPEDIA: HMS Dreadnought was an ironclad turret ship built for the Royal Navy during the 1870s. Construction was halted less than a year after it began and she was redesigned to improve her stability and buoyancy. Upon completion in 1879, the ship was placed in reserve until she was commissioned in 1884 for service with the Mediterranean Fleet. The ship was then immediately placed in reserve until 1884 when she was commissioned for service with the Mediterranean Fleet. Dreadnought was fitted with ten 1-inch (25 mm) Nordenfelt guns on the hurricane deck when she was commissioned. The ship sailed for the Mediterranean Sea on 14 October and remained there for the next decade. The future King George V served aboard in 1886-88. She returned to British waters in September 1894 and began a refit at Chatham Dockyard that included the replacement of her Nordenfelt guns with six quick-firing (QF) 6-pounder (2.2 in (57 mm)) and ten QF 3-pounder (1.5 in (37 mm)) Hotchkiss guns. Dreadnought became a coast guard ship at Bantry Bay, Ireland in March 1895. Two years later, in March 1897, she was relieved of that duty and became a depot ship in July at Devonport. The ship was reboilered and had more QF guns installed in 1898. Dreadnought was reclassified as a second-class battleship in 1900 and took part in British fleet manoeuvres in that year and the following one. In June 1902, she was refitted at Chatham to serve as a tender to HMS Defiance, torpedo school ship at Devonport, and later as a depot ship. She was taken out of service and transferred to the Kyles of Bute in 1905. The ship was sold to T. Wards for scrap for £23,000 on 14 July 1908 and was broken up by February 1909.; Manuscript; 4to - over 9¾" - 12" tall; KEYWORDS: HISTORY OF, J.W. SYKES, GREENWICH PARK, BRITISH ROYAL NAVY, MEDITERRANEAN FLEET, CAPTAIN'S STEWARD, MAURICE ARCHIBALD BOURKE, PRESERVED KILLICK, AUBREY-MATURIN, PATRICK O'BRIAN, HMS DREADNOUGHT, HMS VICTORIA, MARINE, MARITME, SEAFARING, WAR AT SEA, BATTLESHIPS, DESTROYERS, STEAMERS, STEAMSHIPS, NAVAL, NAUTICAL, MEDITERRANEAN, NAVAL, BRITISH ROYAL NAVY, RN, ABLE BODIED SEAMEN, GREAT BRITAIN, HANDWRITTEN, MANUSCRIPT, AUTOGRAPHED, AUTHORS, DOCUMENT, LETTER, AUTOGRAPH, KEEPSAKE, WRITER, HAND WRITTEN, DOCUMENTS, SIGNED, LETTERS, MANUSCRIPTS, HISTORICAL, HOLOGRAPH, WRITERS, AUTOGRAPHS, PERSONAL, MEMOIR, MEMORIAL, PERSONAL HISTORY, ARCHIVE, DIARY, DIARIES, JOURNAL, LOG, PRIMARY SOURCE, FIRST HAND ACCOUNT, SOCIAL HISTORY, PERSONAL STORIES, LIVING HISTORY, ANTIQUITÉ, CONTRAT, VÉLIN, DOCUMENT, MANUSCRIT, PAPIER ANTIKE, BRIEF, PERGAMENT, DOKUMENT, MANUSKRIPT, PAPIER OGGETTO D'ANTIQUARIATO, ATTO, VELINA, DOCUMENTO, MANOSCRITTO, CARTA ANTIGÜEDAD, HECHO, VITELA, DOCUMENTO, MANUSCRITO, PAPEL,BIOGRAPHY BIOGRAPHICAL AUTOBIOGRAPHICAL AUTOBIOGRAPHY PERSONAL NARRATIVES

Title: 1884 - 1889 ORIGINAL MANUSCRIPT DIARY AND LOG BOOKS [2] HANDWRITTEN FROM THE UNIQUE PERSPECTIVE OF THE COMMANDER'S STEWARD OF THE RENOWNED HMS DREADNOUGHT

Publisher: ASEA ABOARD HMS DREADNOUGHT and PORTS OF CALL, 1884