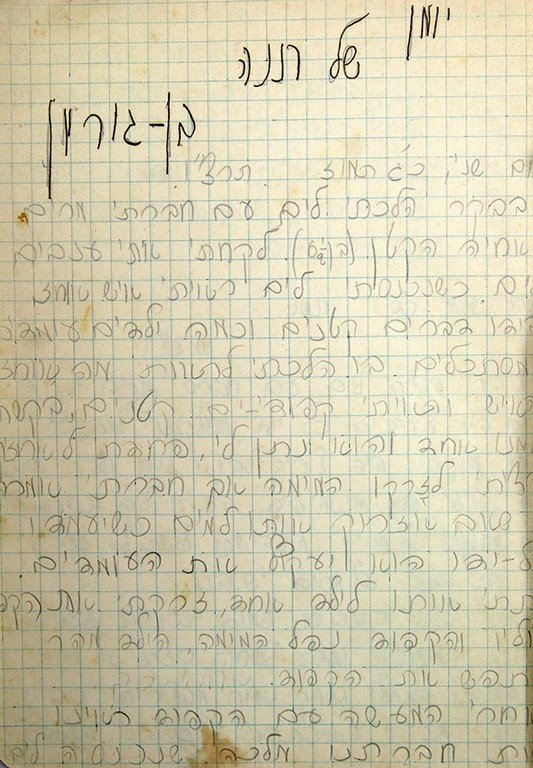 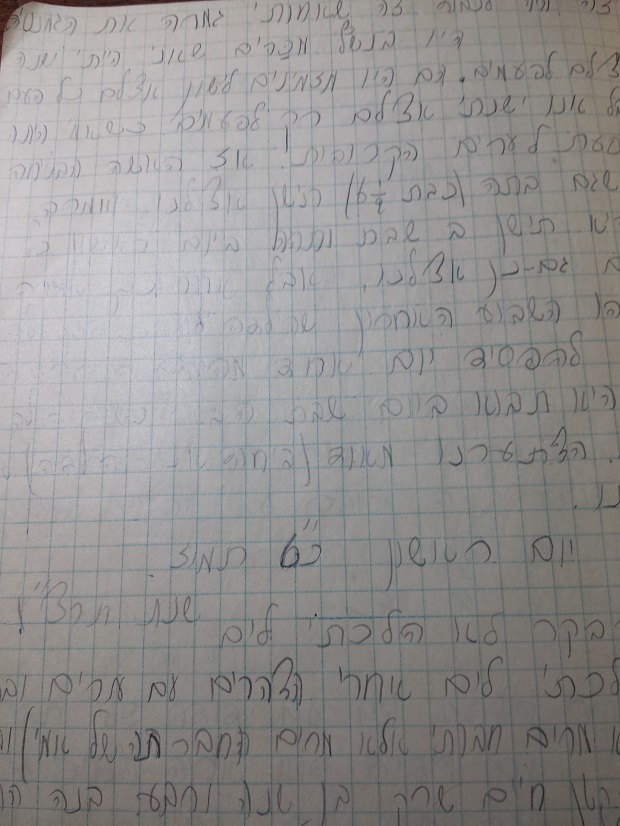 On offer is a super group of four [4] original pre State of Israel notebooks three [3] for school; history, chemistry, religious studies and a personal 14 page 8 x 6 inch diary [1] handwritten by 10 year old Renana Ben Gurion beloved youngest daughter to the hero of Israel's Independence David Ben Gurion. The books offer an unusual insight to both this young girl's early life and the state of education in the pioneer era. Historians and researchers will also recognize the diary as an unparalleled look into this young girl's life; what appears to be an idyllic life of carefree times with the back drop of Arab terror of the 1936 Arab Riots and the political difficulties living under British Mandate and of course that of her famous father, mother and siblings. Research finds that the diary was written in the month Tamuz and the year Tarzav thusly identifying the time as the summer of 1936. We also learn that Renana used to go to the sea with her sister and friends for a swim on Saturday's and holiday mornings. She liked swimming on her stomach. She was too shy to participate in games on the beach with a group of friends who were her friend's friends - Miriam's friends. This group was going there regularly. Miriam begged her to join the game, and she finally succumbed and joined. She was very shy. She describes in detail a celebration that took place for her sister's graduation. A special dress was made for her for the occasion. All the relatives were invited and also the teacher and his wife. The gifts to the sister included flowers, trees in pots, and suitcases. Renana loved to read the newspaper "Davar Leyeladim" or Davar for children. Davar was a popular newspaper in Israel and had special simplified version for children. Renana used to run to the window, looking for the mail man, who delivered the children's newspaper every Thursday morning. She notes visits with her uncle Arye, Arie, the aunt of a friend and her special friend named Miriam. She went with her and Miriam's brother to the sea. Every Tuesday morning, Miriam's classmates got together at the beach. Renana when she got back home from the beach, tried to surprise her mom by cleaning everything and she made the bed. Another day she went to the beach with her sister, named Geula. Her brother had to travel on that day and she did some sewing for him. She sewed his name on his clothes. She also read an English newspaper, which they had at home, or rather looked at the pictures in it. In one snippet she writes: "Afternoon I had to go to a music lesson, so i went" sounding like she had to take music lessons, rather than wanted to take them. Obviously a Ben Gurion family imposed music lessons! BIO NOTES: Renana Leshem, Ben-Gurion's youngest daughter, worked for decades as a microbiologist at the Israel Institute for Biological Research in Ness Ziona. She had one son, Uri. Overall G.; Manuscript; 8vo - over 7¾" - 9¾" tall; KEYWORDS: HISTORY OF, RENANA BEN GURION LESHEM, DAVID BEN GURION, STATE OF ISRAEL, PRE STATE OF ISRAEL, THE HOLY LAND, PALESTINE, BRITISH MANDATE, THE LEVANT, THE MIDDLE EAST, SDE BOKER, THE NEGEV, EASTERN MEDITERRANEAN, ZIONISM, LION OF ISRAEL, FOUNDING FATHER OF ISRAEL, JUDAICA, JUDAISM, SABRAS, HANDWRITTEN, MANUSCRIPT, AUTOGRAPHED, AUTHORS, DOCUMENT, LETTER, AUTOGRAPH, KEEPSAKE, WRITER, HAND WRITTEN, DOCUMENTS, SIGNED, LETTERS, MANUSCRIPTS, HISTORICAL, HOLOGRAPH, WRITERS, AUTOGRAPHS, PERSONAL, MEMOIR, MEMORIAL, PERSONAL HISTORY, ARCHIVE, DIARY, DIARIES, JOURNAL, LOG, PRIMARY SOURCE, FIRST HAND ACCOUNT, SOCIAL HISTORY, PERSONAL STORIES, LIVING HISTORY, ANTIQUITÉ, CONTRAT, VÉLIN, DOCUMENT, MANUSCRIT, PAPIER ANTIKE, BRIEF, PERGAMENT, DOKUMENT, MANUSKRIPT, PAPIER OGGETTO D'ANTIQUARIATO, ATTO, VELINA, DOCUMENTO, MANOSCRITTO, CARTA ANTIGÜEDAD, HECHO, VITELA, DOCUMENTO, MANUSCRITO, PAPEL, BIOGRAPHY, BIOGRAPHICAL, AUTOBIOGRAPHICAL, AUTOBIOGRAPHY, PERSONAL NARRATIVES