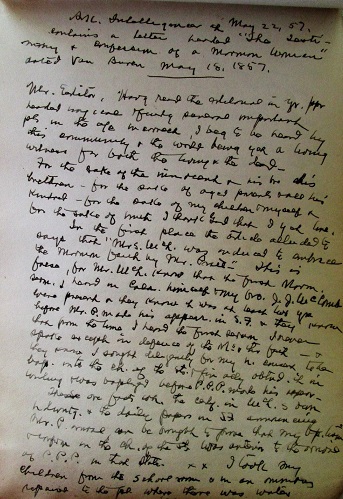 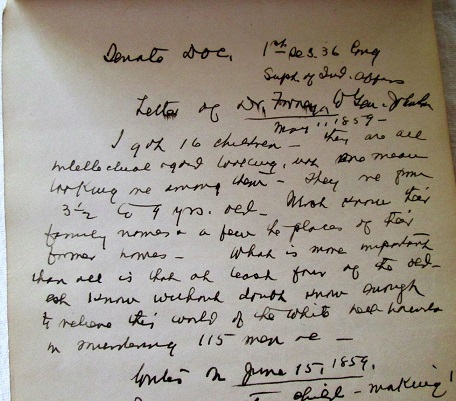 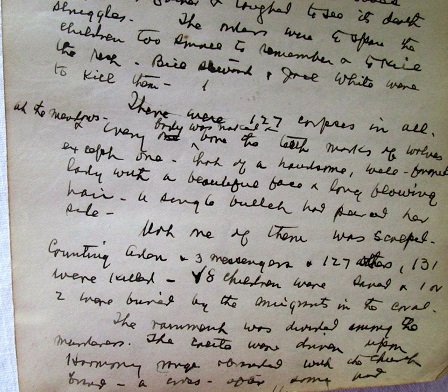 By: WILLIAM A FALCONER

On offer is a significant, original manuscript journal circa 1880 - 1890s through 1900s compiled and created by 'Wm. A. Falconer Fort Smith and Fayetteville Ark.' Research concludes this is the work of Judge William A. Falconer who was born in Charleston, Arkansas in 1869. There he received his early education, then studied law at the University of Arkansas in Fayetteville, then practiced law in Fort Smith, Arkansas beginning in 1895. In 1902 he became a Sebastian County Judge. The book which appears to be a near lifelong effort deals with a notorious crime whose roots were in Arkansas only to turn to infamy sometime later in Utah being the Mountain Meadows Massacre [the worst mass shooting in US history] and the Mormons who led the innocents to a heinous mass execution of early pioneers including women and children. Mr. Falconer without the aid of modern media over 120 years ago spent his efforts on compiling nearly everything written about the massacre and attempted to create a definitive journal on the subject. Sixty+ pages carefully written and while undated a later passage refers to a book published in 1902 and undoubtedly the overall work begun several years prior. Much of the amalgam of material is taken from Mormon records, some from Smithsonian however it is evident the Judge was committed in accumulating all available resources to make for a thoroughly documented perhaps definitive and comprehensive view of the Mountain Meadows Massacre. Some of sources used: The Mountain Meadows Massacre: Who Were Guilty of the Crime? by Elder Chas. W Penrose (Salt Lake City 1884); History of the Mountain Meadows Massacre Published by Pacific Art Co of San Francisco; The Story of the Mormons from Origin to 1901, by Wm Alexander Linn, Macmillan Co 1902; Bancroff's History of Utah, 1890; Biography of Parley Pratt, by his son, 1874; Mormon Endowment Ceremony; Senate Documents and Records of Superintendent of Internal Affairs (mostly letters dated circa 1857); telegrams circa 1857; miscellaneous letters some from Parley Pratt; excerpts from letter sent by Eleanor J. McComb / previously E J McLean (sealed to Parley Pratt as his 12th plural wife) dated May 18, 1857, to Editor of ' Intelligencer ' of Van Buren Arkansas etc. [HISTORICAL NOTE: Ms. McComb after converting to Mormonism, her marriage to Hector McLean failed and she went back to her maiden name of McComb, and later became sealed as one of Parley Pratt's plural wives. Her estranged husband Hector McLean killed Parley Pratt. She wished to correct the Van Buren Community and the world: "She embraced Mormon faith by her own free will after hearing Parley Pratt's sermons. She refers to Mormon elders as being a 'fountain of light and intelligence from which you might drink and the stream flowed clean and pure.' Here are some snippets: "... then went to Fort Gibson, near Van Buren Ark. There he had Pratt arrested, but seemed to be no law under which he could be held. As soon as Pratt was released, he left on horseback. McClean followed him on horseback for 8 miles and shot him. Mormon policy was to hold every Arkansan accountable for Pratt's death." "Young gave me a message the Indians must be kept from the Emigrants but not to spare horse flesh.... When I handed message to Haight he said "Too late! Too late!" On my way to Salt Lake City the Indians told me they were going to kill the emigrants before I got back." "Decoy plan was put into effect. A white flag brought in by Lee. He promised emigrants protection if they would lay down........forced to comply. Arms, wounded and children placed in two wagons, behind came women in single file, then the men, unarmed, starving and wounded. Lee arched between 2 wagons. Suddenly he used his gun, and killed a woman. It was a signal to Indians and painted Mormons behind the bushes. Men, women, children were shot down like sheep. Sick who were too ill to leave were driven up to scene of slaughter and butchered and stripped." "A young mother saw her husband fall dead...... she fell dead over her husband's flesh. A man deliberately picked up the little babe and pinned it to the body of the father and laughed to see it's death struggles." "There were 127 corpses in all, every body was naked." "The Indians say the Mormons cheated them in the division of spoils." "The Mormons say the Indians were the murderers.... yet they speak with no sympathy." "I got 16 children......... between the ages of 3-1/2 and 9 years." The front cover of the 5¾ x 8¼ inch tablet style book is worn and detached, as well as the first page. First page has some tears, a few small pieces missing and lies detached. All other pages are bound together and un-torn save some chipping to the edges. Overall G-. ; Manuscript; 8vo - over 7¾" - 9¾" tall; KEYWORDS: HISTORY OF, JUDGE WILLIAM A FALCONER, FORT SMITH, FAYETTEVILLE, ARKANSAS, MORMON MOUNTAIN MEADOWS MASSACRE, SEBASTIAN COUNTY, BAKER-FANCHER PARTY, UTAH, MORMONS, MORMONISM, MORMON PARANOIA, BETRAYL, GENOCIDE, XENOPHOBIA, SALT LAKE CITY, MANIFEST DESTINY, CEDAR CITY, JOHN D. LEE, HAUN'S MILL, JOSEPH SMITH, MORMON PERSECUTION, NAUVOO, PARLEY P. PRATT, LATTER DAY SAINTS, BRIGHAM YOUNG, LDS, AMERICANA, HANDWRITTEN, MANUSCRIPT, AUTOGRAPHED, AUTHORS, DOCUMENT, LETTER, AUTOGRAPH, KEEPSAKE, WRITER, HAND WRITTEN, DOCUMENTS, SIGNED, LETTERS, MANUSCRIPTS, HISTORICAL, HOLOGRAPH, WRITERS, AUTOGRAPHS, PERSONAL, MEMOIR, MEMORIAL, PERSONAL HISTORY, ARCHIVE, DIARY, DIARIES, JOURNAL, LOG, PRIMARY SOURCE, FIRST HAND ACCOUNT, SOCIAL HISTORY, PERSONAL STORIES, LIVING HISTORY, ANTIQUITÉ, CONTRAT, VÉLIN, DOCUMENT, MANUSCRIT, PAPIER ANTIKE, BRIEF, PERGAMENT, DOKUMENT, MANUSKRIPT, PAPIER OGGETTO D'ANTIQUARIATO, ATTO, VELINA, DOCUMENTO, MANOSCRITTO, CARTA ANTIGÜEDAD, HECHO, VITELA, DOCUMENTO, MANUSCRITO, PAPEL,BIOGRAPHY BIOGRAPHICAL AUTOBIOGRAPHICAL AUTOBIOGRAPHY PERSONAL NARRATIVES