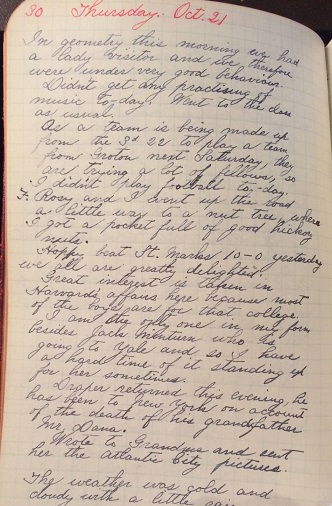 On offer is a super, original September 22 - December 16th 1897 and then one entry for January 1, 1898 manuscript relic of one unidentified student's time at the Groton School in Groton, Massachusetts just prior to the turn of the Century. Though he is unidentified local historians and researchers should have a wealth of clues to deduce the identity. Most helpful of clues being that our young author is what appears to be one of Franklin Delano Roosevelt's [FDR] best friends. A mere 3 years before FDR's cousin Theodore would become president and the name Roosevelt would dominate American politics for decades to come the writer details his school experiences over 88 pages whether studies or sports, visits, holidays etc over a three and a half month period, 18 references to FDR, making for intimate look at life in the Groton School which was a very exclusive preparatory school for many of America's elite including 15 year old Roosevelt. FDR's nephew J.R. 'Tadd' Roosevelt also is one of the crowd. As best friends they did everything together; playing golf, football, going to church, going to a fair, a Christmas invitation to the Roosevelt house in Hyde Park. Very intimately told the writer provides interesting insight to the life of teenage Franklin Roosevelt: they played a lot of golf together and Franklin as the superior golfer gave the writer a "handicap". He mentions Tadd Roosevelt was 'better this year. He doesn't get so grouchy.' Another golf anecdote involves a bad day: 'Rosy lost 4 balls and hit Charlie Lawrence.' Though the diary covers the Fall and ends abruptly mid December the author does a fine job describing life for a 'fourth' form student at Groton. He also does a fine job as a diarist mentioning the names of his classmates and the interactions and given the Groton School is a famous prestigious school the book is rife with names some 'pet' names like 'Polly Wharton' his opposite in the dorm and 'awfully funny'. Others include Cooper Lord, W. Burnham, Gorham Brooks, L. Bradley, Wendell Blagden and many more. Robert R. McCormick is also mentioned as a friend of the writer as well although not as close of a friend as Franklin Roosevelt and that polar relationship would extend into their adult lives [see the HISTORICAL NOTES.] The journal measures about 4¾ x 7½ inches. There is a small tear in the cover that measures 2 x 0.25 inches. Overall G. HISTORICAL NOTE: Robert Rutherford "Colonel" McCormick (July 30, 1880 - April 1, 1955) was a member of the McCormick family of Chicago who became owner and publisher of the Chicago Tribune newspaper. A leading non-interventionist, an opponent of American entry into World War II and of the increase in Federal power brought about by the New Deal, he continued to champion a traditionalist course long after his positions had been eclipsed in the mainstream.; Manuscript; 12mo - over 6¾" - 7¾" tall; KEYWORDS: HISTORY OF, GROTON, FRANKLIN D. ROOSEVELT, PRESIDENT OF THE UNITED STATES, FDR, PRE WORLD WAR I, GROTON SCHOOL, ROBERT R. MCCORMICK, JAMES ROOSEVELT ROOSEVELT, TADD ROOSEVELT, HYDE PARK, ELEANOR ROOSEVELT, AMERICANA, HANDWRITTEN, MANUSCRIPT, AUTOGRAPHED, AUTHORS, DOCUMENT, LETTER, AUTOGRAPH, KEEPSAKE, WRITER, HAND WRITTEN, DOCUMENTS, SIGNED, LETTERS, MANUSCRIPTS, HISTORICAL, HOLOGRAPH, WRITERS, AUTOGRAPHS, PERSONAL, MEMOIR, MEMORIAL, PERSONAL HISTORY, ARCHIVE, DIARY, DIARIES, JOURNAL, LOG, PRIMARY SOURCE, FIRST HAND ACCOUNT, SOCIAL HISTORY, PERSONAL STORIES, LIVING HISTORY, ANTIQUITÉ, CONTRAT, VÉLIN, DOCUMENT, MANUSCRIT, PAPIER ANTIKE, BRIEF, PERGAMENT, DOKUMENT, MANUSKRIPT, PAPIER OGGETTO D'ANTIQUARIATO, ATTO, VELINA, DOCUMENTO, MANOSCRITTO, CARTA ANTIGÜEDAD, HECHO, VITELA, DOCUMENTO, MANUSCRITO, PAPEL,BIOGRAPHY BIOGRAPHICAL AUTOBIOGRAPHICAL AUTOBIOGRAPHY PERSONAL NARRATIVES

Title: 1897 ORIGINAL MANUSCRIPT DIARY OF A GROTON SCHOOL STUDENT AND BEST PAL OF FRANKLIN DELANO ROOSEVELT WHO KINDLY GIVES HIS PAL AND GOLF BUDDY A COUPLE OF STROKES AS A HANDICAP