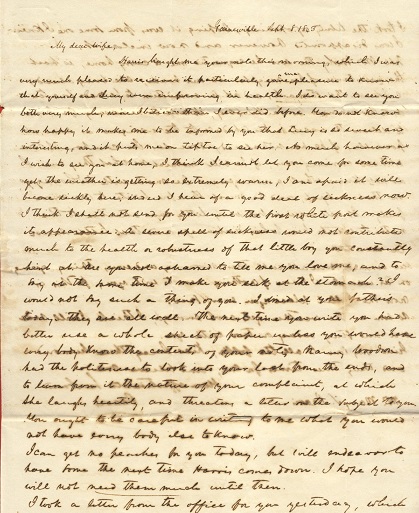 On offer is a very interesting, original manuscript letter handwritten by Reavis [as signed] to his wife Mrs. Mary Reavis, Kemper Springs, Mississippi. Dated Gainesville September 8, 1843 [while not specified we have anecdotal information this is Gainesville in Alabama]. Of particular fascination to researchers and historians of the times and social life this letter makes for an unusual look in to what appears to be a marriage in crisis. Mr. Reavis provides all the societal niceties in his first paragraph and we understand he misses his family, though this may be a ruse, he will not send for them as there is sickness: 'I cannot let you come at this time yet the weather is getting so extremely warm I am afraid it will get sickly here indeed I hear of a good deal of sickness now. I think I shall not send for you until the white frost makes its appearance.' However there is an illness within already: Mr. Reavis specifies that his wife should use an entire piece of paper writing next time so that her complaints cannot be read by the deliverer as was already the case of a woman reading her problems through the ends of the paper and now laughing about it to all. He also notes that while she is not ashamed to say she loves him she also has no shame to say he makes her sick to her stomach. A very personal and intimate 'catching up' letter between an unhappy and rather confused husband and to a wife who appears to already be in a vindictive fight. The letter swings back to describing life in Gainesville and their other mutual concerns. Cover has no postal markings. The second lettersheet has a great bit of edge damage and interior tears and cuts that affect nothing except the appearance of the letter, the first lettersheet has cuts and tears from acid ink erosion. Overall G.

Title: 1843 ORIGINAL MANUSCRIPT LETTER HANDWRITTEN BY AN ALABAMA BASED HUSBAND IN NO RUSH AT ALL TO REUNITE WITH HIS TERMAGANT WIFE IN MISSISSIPPI